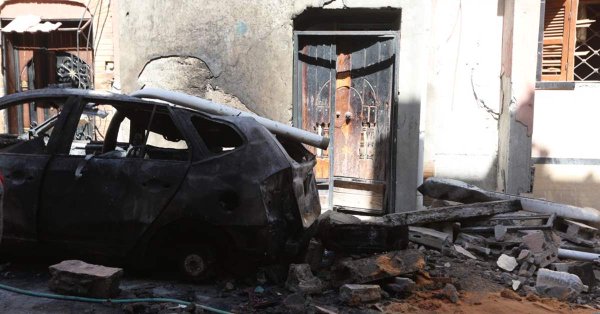 Six weeks on, the offensive to take over Tripoli has resulted in unlawful attacks that could amount to war crimes which must be investigated by international prosecutors, Amnesty International said today, revealing evidence of indiscriminate attacks on civilian areas in the Libyan capital.

The organisation has gathered witness testimony and analysed satellite imagery, which indicates that densely populated residential areas in the Abu Salim district of Tripoli were indiscriminately attacked with rockets during an episode of intense fighting between 15-17 April.

Amnesty International has also documented attacks that have placed the lives of hundreds of refugees and migrants at risk.

“As the battle for Tripoli unfolds, the warring parties have displayed a shameful disregard for civilian safety and international humanitarian law by carrying out indiscriminate attacks on residential neighbourhoods. Such reckless attacks could have devastating consequences for civilians and strengthen the need for the International Criminal Court to expand its investigations into possible war crimes by all sides in Libya’s conflict,” said Magdalena Mughrabi, Deputy Middle East and North Africa Director at Amnesty International.

“Deliberate attacks on civilians and civilian property, and indiscriminate attacks that kill or injure civilians amount to war crimes. All sides have an absolute obligation under international law to protect civilian lives and to clearly distinguish between civilians and fighters during their attacks.”

Since the advance on Tripoli by General Khalifa Haftar’s forces began on 4 April, more than 454 people have been killed and 2,154 injured, according to the World Health Organisation. The UN Office for the Coordination of Humanitarian Affairs has confirmed 111 civilian casualties, including at least 23 civilian deaths with fears that the civilian death toll will continue to climb. Medical workers are amongst the dead and injured.

Approximately 70,000 people have been forced to flee their homes because of the fighting. A volunteer at a makeshift shelter housing displaced people in a school in Fornaj, southeast of Tripoli, said some of the displaced had seen the homes they rebuilt following the 2011 conflict destroyed once again. The humanitarian situation has also deteriorated with frequent power cuts being reported, and a shortage of hospital medical supplies.

Amnesty International investigated attacks occurring between 15 and 17 April and identified three areas within the Abu Salim district of Tripoli –  Hay al-Intissar, Hay Salaheddin and a neighbourhood known locally as the “Kikla buildings” – which were struck by inaccurate weapons launched by attackers who failed to take necessary precautions to protect civilian lives and civilian objects.

On the night of 16 April residents reported a number of rocket attacks in Hay al-Intissar. One eyewitness said five rockets struck five different homes killing four women and one man and injuring a little girl. She was taken to hospital in critical condition but survived.

Amnesty International’s analysis of satellite imagery of Abu Salim between 13 and 17 April confirms damage inflicted on two densely built-up sites in Abu Salim, as well as damage in the nearby residential area of Hay Salaheddin.

Based on satellite imagery, eyewitness accounts, and accounts from other credible sources, Amnesty International could see no military bases or checkpoints nearby and found no visible evidence that suggests any military target was located in either of the residential areas at the time of the attacks.

The area is controlled by the Abu Salim Central Security Forces, a militia affiliated with the Tripoli-based Government of National Accord (GNA). But eyewitnesses said no fighters were present in the area.

“Hay al-Intissar is a strictly residential area. There were families and children minding their own business,” said one witness explaining that all the GNA-affiliated fighters had left the area to go to the frontlines.

The “Kikla buildings”, a large residential complex south of Hay Salahaddin, about two kilometres away from Hay al-Intissar, was attacked on 15 April.

Amnesty International independently verified and analysed multiple photos of the scene of the attack, and identified ordnance fragment damage to a civilian home and scrap consistent with rocket artillery, including 122mm Grad-style rockets. A third rocket hit the ground according to eyewitnesses and did not cause any injuries.

Based on its analysis of satellite imagery, as well as three interviews with residents, Amnesty International found no visible evidence that any military target was located in the “Kikla Buildings” at the time of these attacks.

Amnesty International could not conclusively determine which side carried out any of the attacks on Hay al-Intissar, Hay Salahaddin, or the “Kikla Buildings”.

In addition, Amnesty International verified and geo-located videos and photos published on social media showing damage to civilian homes and other civilian objects such as a mosque, ambulances and school facilities.

Both the GNA forces and the self-proclaimed Libyan National Army (LNA) led by General Haftar have traded blame for the indiscriminate attacks on residential neighbourhoods in southern Tripoli on 16 April. However, all Abu Salim residents interviewed believed forces affiliated with the LNA were responsible.

Both 107mm rockets and GRAD rockets are unguided and inaccurate and should not be used in civilian areas in salvos, where many rockets are fired at once, making it impossible to distinguish between military and civilian targets.

“The use of artillery and other imprecise weapons such as GRAD-style rockets in civilian areas is prohibited under international humanitarian law and such indiscriminate attacks can amount to war crimes. In both documented cases, the attackers blatantly ignored their obligations to take all feasible precautions minimize suffering to civilians,” said Magdalena Mughrabi.

On the night of 7 May, an airstrike hit approximately 100 metres from the Tajoura migrant detention centre, in eastern Tripoli, where some 500 migrants and refugees were being detained in disused airplane hangars. Eyewitnesses described the “terrifying” sound of the attack saying it caused some detainees to faint.

According to UNHCR, two people were injured in the attack. Médecins Sans Frontières said heavy metal debris from the strike tore through the roof of one of the hangars where women are detained and almost hit an infant.

Eyewitness accounts and satellite imagery analysed by Amnesty International suggest that the airstrike hit an armoured vehicle next to a warehouse facility, which detainees said is used to store weapons, located within the same compound as the immigration detention centre. The images also show many armoured vehicles in the area, suggesting that fighters are using the compound of the detention centre as a military complex.

The strike is consistent with a pattern of night-time airstrikes conducted by LNA drones, operated by the UAE, and utilizing Chinese-manufactured Wing Loong aircraft firing Blue Arrow 7 missiles.

Two detainees at Tajoura detention centre told Amnesty International they were forced to engage in conflict-related activities such as loading and unloading guns and cleaning heavy machine guns, against their will.

Just days later, on 10 May, another airstrike hit the vicinity of the detention centre, three detainees told Amnesty International.

“By detaining migrants and refugees in such close proximity to an active military site, the Libyan authorities are endangering the lives of civilians who are completely in their power. They should be doing everything feasible to remove them away from military targets. The allegations that some of the detainees were forced to work at the military sites against their will also violates international law,” said Magdalena Mughrabi.

In a separate incident, eyewitnesses told Amnesty International that, on 23 April, armed men opened fire on migrants and refugees held at the Qasr Ben Ghashir detention centre, south of Tripoli. According to the UN Refugee Agency (UNHCR) at least 12 people were injured and taken to hospital.

According to eyewitnesses, up to 15 men entered the centre, some then began to confiscate detainees’ phones, ordering a group of Christian detainees carrying out Easter prayers to stop. They started to shoot when the detainees refused. Evidence gathered by the organisation suggests LNA-affiliated fighters were responsible for the attack on the centre, which is in an area under their control.

In addition to violations committed during the conduct of hostilities the UN has reported an increase in arbitrary detention, abductions, kidnapping and enforced disappearance since the outbreak of fighting in and around Tripoli.

“The rise in reports of abductions and arbitrary arrests by both sides since the Tripoli offensive began is deeply alarming. No one should be targeted with abduction or arbitrary arrest solely on the basis of their background or political

“The relentless cycle of mounting abuses means the need is greater than ever for states to fully implement the UN arms embargo on Libya. A meaningful accountability system must be set up to investigate serious violations of international humanitarian law by all warring parties and hold those responsible to account.”