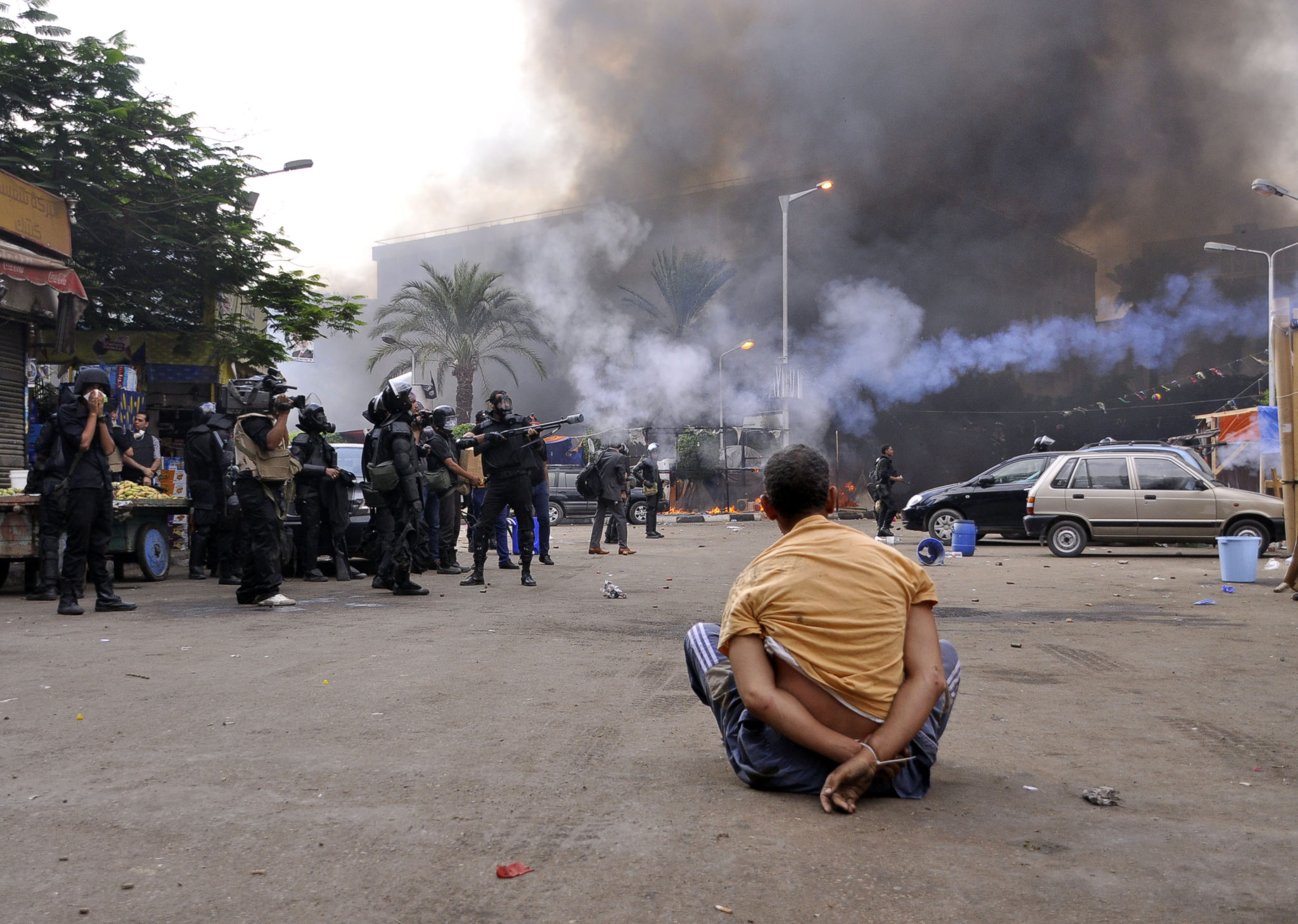 Largest wave of mass arrests in Egypt, including children, lawyers and journalists, since al-Sisi came to power

Over the past 12 days, Egyptian authorities have launched the biggest crackdown under President Abdel Fattah al-Sisi’s rule rounding up more than 2,300 people – at least 111 of them children – said Amnesty International today. The authorities have carried out sweeping arrests of hundreds of peaceful protesters as well as carrying out more targeted arbitrary arrests of human rights lawyers, journalists, political activists and politicians.

The vast majority of those arrested are being investigated as part of one single case. If referred to trial, it would be the largest protest-related criminal case in Egypt’s history.

“President Abdel Fattah al-Sisi’s government has orchestrated this crackdown to crush the slightest sign of dissent and silence every government critic. The wave of unprecedented mass arrests, which included many who were not even involved in the protests, sends a clear message – anyone perceived to pose a threat to Sisi’s government will be crushed,” said Najia Bounaim, North Africa Campaigns Director for Amnesty International.

“Participating in a peaceful protest is not a crime. The Egyptian authorities’ draconian response to the peaceful demonstrations illustrates their utter contempt for human rights and displays a flagrant disregard for the rights to peaceful protest and freedom of expression. The authorities must immediately and unconditionally release anyone detained solely for peacefully exercising their rights to freedom of assembly or expression. “

In a rare challenge to President al-Sisi, and his government, small protests broke out in several cities across Egypt starting on 20 September. The Egyptian authorities sought to prevent a second round of protests on 27 September by shutting down large parts of downtown Cairo and carrying out mass arrests.

An official statement from Egypt’s Office of the Public Prosecutor on 26 September stated that “less than 1,000 people” have been interrogated in relation to their peaceful participation in protests. It confirmed that the defendants’ social media accounts had been searched for evidence of “incitement to protesting”. The statement mentioned that calls to protest posted on social media would be considered evidence of the “crime” of “unauthorised assembly”.

Human rights lawyers working with organisations including the Egyptian Center for Economic and Social Rights (ECESR) and Egyptian Commission for Rights and Freedoms (ECRF) have documented at least 2,300 arrests so far. According to lawyers, scores of detainees have been released without questioning, but many others continue to appear in front of prosecutors.

According to Belady for Rights and Freedoms, at least 111 children, aged between 11 and 17, are among those arrested, several of them subjected to enforced disappearances for periods ranging between two and 10 days.  At least 69 are facing charges including of “membership in a terrorist group” and “misusing social media”, though many of them do not even have mobile phones.

Amnesty International has documented the arrest of five children, three of them were  buying school stationery and uniforms from downtown Cairo at the time; and two were returning home from school in Suez. Osama Abdallah’s parents still don’t know the whereabouts of their 16-year-old son. Since his arrest on 21 September, his parents were not able give him his medication or inform the authorities that he’s due to undergo emergency surgery. Copies of his medical report were seen by Amnesty International.

Amnesty International has also verified a video showing plainclothes “informants” beating a 17-year-old boy and arresting him in down town Cairo.

Most detained children have been barred from contacting their families and detained alongside adults in violation of international standards.

Lawyers, journalists and politicians rounded up

Amnesty International has documented the arrest of 10 journalists, remarkably most of them working for pro-government media outlets, primarily in Suez and Mahalla, and at least 25 politicians and academics from four different political parties. They include Khaled Dawoud, journalist and former head of liberal Dostour party, as well as political science professors Hassan Nefea and Hazem Hosny. At least ten are facing investigation on “terrorism-related” charges.

In a serious blow to defendants’ rights to provide a legal defence, lawyers have also been targeted with at least four arrested while carrying out their work and a total of 16 lawyers have been arrested.

On 29 September, human rights lawyer and director of the Adalah Center for Rights and Freedoms Mohamed el-Baqer entered the Supreme State Security Prosecution (SSSP) building to represent detained activist Alaa Abdelfattah only to be arrested on the same unfounded charges as his client. These include “membership in a banned group” and “spreading false information”. The prosecutor questioned him about his organisation’s work and did not present any evidence against him except a National Security Agency investigation report, which neither he nor his lawyer have been allowed to examine.

Amnesty International considers Mohammed el-Baqer a prisoner of conscience who is detained solely for his work defending victims of human rights violations. The organisation is calling for his immediate and unconditional release.

“The vast scale and arbitrary nature of the arrests is clear indicator of how unnerved the Egyptian authorities are feeling about the prospect of further protests,” said Najia Bounaim.

“People from all walks of life have come under attack. Lawyers, politicians and journalists and others must be allowed to carry out their work freely and voice their opinions without facing any reprisals.”

At least seven foreign nationals were also arrested and forced to “confess” to conspiring against Egypt on camera. The videos were broadcast on a private TV channel. Amnesty International fears they were coerced to incriminate themselves under duress.

In a particularly unjust and unlawful move, Egyptian authorities have also resorted to re-arresting former prisoners under police probation – in some cases when they were nowhere near the protests.

Security forces re-arrested Alaa Abed El-Fattah, political activist and software engineer who rose to prominence during the 2011 uprising, on 29 September while he was serving his probation in Dokki police station. He had already served an unjust five-year prison sentence for participating in a peaceful protest in 2013. As part of his probation conditions, upon his release in March 2019 he was required to spend 12 hours every night at a police station for five years. Despite having been locked up at the time of the protests he was detained on charges of spreading false news and joining an illegal organisation.

Mohammed Ibrahim, founder of the well-known blog “Oxygen Egypt”, was also re-arrested for posting videos about the latest protests while he was serving his probation sentence at a police station in Cairo on 21 September.

Amnesty International calls on the Egyptian authorities to halt the use of probation measures against peaceful activists as punishment for exercising their rights to freedom of expression and peaceful assembly.

To prevent further protests on 27 September, police established several informal checkpoints in downtown Cairo and Alexandria, where plainclothes “informants” and policemen stopped individuals at random and ordering them to hand over their phones for their social media accounts to be examined, in some cases subsequently leading to their arrest. The authorities have also conducted searches without warrants of several homes in Downtown Cairo.

In one case, an individual was arrested simply for having downloaded a news application onto his phone known to publish articles critical of the authorities. These random searches are not only a gross violation of an individual’s right to privacy under Egypt’s own constitution but also under international and regional human rights treaties to which the country is a state party.

Amnesty International’s research has also found deep flaws in the investigations of those arrested and a flagrant disregard for due process.

The vast majority of the arrests are arbitrary  because they are based on the act of peaceful protest or participation in calls to protest. The charges brought against detainees stem solely from their peaceful exercise of their rights to assembly and rely on Egypt’s archaic assembly laws which criminalise unauthorised assembly or Penal Code provisions that criminalise legitimate expression.

According to ECESR at least 2,285 have been detained pending investigations as part of six separate cases. The vast majority (2,268) fall under case no.1338/2019, and are facing charges of “aiding a terrorist group”, “disseminating false information”, “misusing social media” and “participating in unauthorised protests”. The authorities ordered their detention pending investigations, regardless of their individual circumstances.

Many were initially detained in Central Security Forces camps and barred from contacting their family or lawyers. The authorities have also refused to officially disclose the whereabouts of many of those detained.

Many detainees were held for days before eventually being questioned without their lawyers in violation of their legal rights. In several cases, large groups were questioned at the same time resulting in hundreds facing the same set of charges and their collective pre-trial detention ordered at the same time. These practises violate Egypt’s own laws and its international human rights obligations and commitments.

Amnesty International calls on the authorities to disclose the location of all those currently detained and to ensure they have access to lawyers, their family and medical care if required.

Since the protests began, the President, the Public Prosecutor, the State Information Service and several pro-government media platforms have attempted to discredit protesters and politicians by labelling them as “Islamists” or “terrorists”.

They have also denounced statements by a number of Egyptian and international human rights organisations including Amnesty International as “politicised”, completely denying that they are violating the rights of hundreds of Egyptians. Al-Nadeem Center for Rehabilitation of Victims of Violence have also stated that they have been subjected to harassment by security forces over the past week.

“Instead of spending time trying to whitewash their human rights violations by attacking human rights organisations who highlight abuses, the Egyptian authorities should focus on ending the wave of mass arbitrary arrests and releasing all those who have been detained for peacefully exercising their right to freedom of expression and assembly,” said Najia Bounaim.