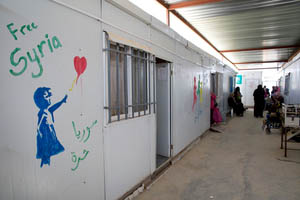 The combination of grossly inadequate support from the international community and barriers imposed by the government of Jordan are leaving Syrian refugees unable to access health care and other vital services, said Amnesty International in a new report published ahead of a major high-level meeting on responsibility sharing for Syrian refugees.

Living on the margins: Syrian refugees struggle to access health care in Jordan features heart-rending cases of refugees in need of emergency care to treat injuries sustained during the conflict in Syria being turned away at the Jordanian border – leaving some to die as result of their wounds. It also highlights how many Syrian refugees, who live outside refugee camps, are either unable to afford medical care since the Jordanian authorities imposed new fees in November 2014, or lack the necessary documents to be eligible to access health care.

“The vast majority of Syrian refugees in Jordan live outside camps in urban areas, and in poverty. Lengthy bureaucratic procedures and additional health care fees pose huge obstacles to those of them requiring medical treatment. The user fees imposed by Jordan may not appear to be high but are unaffordable for most refugees who are struggling to feed their families, and leave many unable to access the critical care they need,” said Colm O’Gorman, Executive Director at Amnesty International Ireland.

“Greater international support in the form of more resettlement places for refugees and financial assistance would make a world of difference by enabling the Jordanian authorities to strengthen the health system and remove barriers that are preventing Syrian refugees from accessing crucial health care.”

At the end of 2015 only 26% of funding requirements for health in the Jordan Response Plan for the Syria Crisis had been met.

According to the UN Refugee Agency, UNHCR, at least 58.3% of Syrian adults with chronic conditions are not able to access medicines or other health services.

Around 117,000 Syrian refugees live in three camps where they have access to education, health care, water, food and cash for work programmes, provided by the UN, national and international organisations. However the majority of Jordan’s 630,000 Syrian refugees registered with UNHCR live outside refugee camps and require specific documents, including a card issued by the Ministry of Interior to access public services. Refugees who have left refugee camps unofficially or who have re-entered Jordan after having previously returned to Syria are also not eligible to receive these documents and therefore cannot access public services leaving them reliant on humanitarian aid or private donors.

Sarah, a Syrian refugee, lost her left leg at the age of eight after being injured in a rocket attack in Eastern Ghouta, north east of Damascus. Her family came to Jordan so that she could get further treatment. At first they stayed in Zaatari refugee camp where she received health care and a prosthetic limb. However, they left the camp after receiving threats from other refugees and have been unable to access public services ever since due to a lack of documentation.

Even for Syrian refugees eligible to access health care it can often be unaffordable for many, who are forced to make choices between paying for health care or meeting other basic needs for their families. Three women interviewed by Amnesty International who had recently given birth at an NGO hospital in Irbid, Jordan said they had delayed crucial antenatal check-ups because they could not afford public hospital fees and transport costs.

“While Jordan is undeniably under a huge strain from hosting hundreds of thousands of refugees from Syria with limited international support, the authorities cannot ignore their obligation to ensure that all persons are able to access health services,” said Colm O’Gorman.

While Jordan is undeniably under a huge strain from hosting hundreds of thousands of refugees from Syria with limited international support, the authorities cannot ignore their obligation to ensure that all persons are able to access health services

Blocking entry to people in need of emergence care

Since 2012 Jordan has imposed increasing restrictions on access for Syrians attempting to enter the country through formal and informal border crossings. It has made an exception for Syrians with war-related injuries.  However, Amnesty International has gathered information from humanitarian workers and family members of Syrian refugees with critical injuries being denied entry to Jordan for medical care, suggesting the exceptional criteria for entry on emergency medical grounds is inconsistently applied. This has led to refugees with critical injuries being returned to field hospitals in Syria, which are under attack on a regular basis, and to some people dying at the border.

In July 2015 at least 14 people with severe injuries including five children with complex or multiple shrapnel wounds were prevented from entering Jordan. According to the information gathered by Amnesty International, four of them – including a three-year-old girl – died while waiting at the border. In another case, a 14 year old boy suffering from injuries that left him in a critical condition, was denied entry because he was unable to produce ID documents. He died the following day at a field hospital in Syria. Others denied entry included a two-and-a-half year old girl who had suffered head injuries due to a barrel bomb attack. In some cases families were also separated at the border and others have been forcibly returned to Syria after being barred from entering because they did not have a Syrian ID in direct violation of Jordan’s international obligations including the principle of non-refoulement.

“Closing the border to those in need of asylum, whether or not they are injured, is a violation of Jordan’s international obligations,” said Colm O’Gorman.

“To not even allow the entry to people who are fleeing a conflict zone with serious injuries because they don’t have ID papers shows a chilling lack of compassion and appalling disregard for their rights to health and life.”

Resettlement and other pathways for admission of Syria’s refugees

Amnesty International’s report has been published ahead of a meeting hosted by UNHCR on 30 March where states will be invited to pledge resettlement places and alternative pathways for the admission of Syrian refugees. It is an opportunity for governments to show solidarity with the five countries hosting over 4.8 million refugees from Syria, and to provide a lifeline to those in need of it.

So far the international community has pledged just 178,195 resettlement places for Syrian refugees. Amnesty International is calling for at least 480,000 of the most vulnerable refugees in the five main host countries – which includes those with disabilities, chronic illnesses or injuries – to be resettled to a safe third country.

“The international community’s offers to take in refugees through resettlement and other forms of humanitarian admission remain woefully insufficient. The world must not squander this opportunity to make a difference to the lives of Syrian refugees in desperate need of medical care. They must use the 30 March conference to significantly step up the number of places offered to refugees in desperate need,” said Colm O’Gorman.