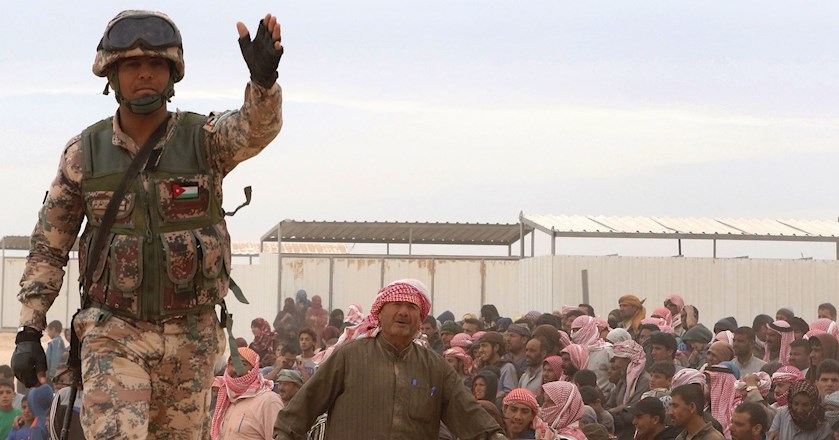 Jordan: Response to border bombing must not include push-back of refugees

The “iron fist” security response pledged by Jordanian authorities in the wake of Tuesday’s car bombing of a military outpost along the border with Syria must not descend into closing the border and denying humanitarian aid to tens of thousands of Syrian refugees fleeing armed conflict, Amnesty International said today.

No group has yet claimed responsibility for the apparently well-coordinated attack, which killed six army border guards and injured several others.

More than 70,000 people are stranded in the desert area known as “the berm”, which is a raised barrier of sand marking the Jordanian limit of the Jordan-Syria border near Rukban and Hadalat crossings. A total closure of the border and denial of humanitarian aid to the area would inevitably lead to extreme hardship among those unable to find refuge and put their lives at risk.

Tens of thousands of refugees are trapped near where this attack took place. Many have fled some of the worst-affected areas of Syria including Aleppo, Deyr al-Zur, Homs, Hama and al-Raqqa. Their very lives continue to hang in the balance at the border


“Jordan has a duty to protect civilians from armed attacks – but its security measures must not violate its international legal obligations to provide protection and assistance to refugees who are desperately fleeing the very same type of violence. Denying them entry into Jordan amounts to a violation of international law.”

The attack on Tuesday targeted the Rukban crossing in a remote desert area near where the borders of Jordan, Syria and Iraq meet. In mid-2014 Jordan effectively closed its eastern borders to Syrians fleeing the conflict which has led to a gradual build-up of people at its Rukban and Hadalat border crossings.

In November 2015 there were around 9,000 Syrians stranded with the numbers gradually increasing. Currently more than 60,000 people are staying in dire conditions near Rukban border crossing and more than 10,000 near Hadalat border crossing, hoping for permission to seek safety in Jordan.

In March 2016 Jordan reportedly agreed to admit up to 20,000 refugees stranded at the border crossings to Azraq refugee camp. However those admitted have been kept in a fenced area within the camp, known as ‘Village 5’. Humanitarian workers estimate that if the situation continues, there will be 100,000 Syrians stranded at the berm by the end of the year.

‘Iron fist’ response
The Jordanian authorities reacted swiftly to Tuesday’s attack – King Abdullah II said his government would respond with “an iron fist” and the border crossings were sealed.

“We are taking specific immediate steps. The first one is to close that … [border] crossing … and consider this area a closed military zone. We are also not building nor expanding any existing refugee camps,” Jordan’s Information Minister, Mohammed Momani said in a statement to the media.

Jordan currently hosts more than 650,000 Syrian refugees registered by the UN Refugee Agency, UNHCR. Amnesty International has repeatedly called on the international community to increase support to Jordan as a main refugee hosting country including through fully funding the 2016 Jordan Response Plan and increasing the number of resettlement places offered. As of 12 June 2016, the Jordan Response Plan was 6.2% funded