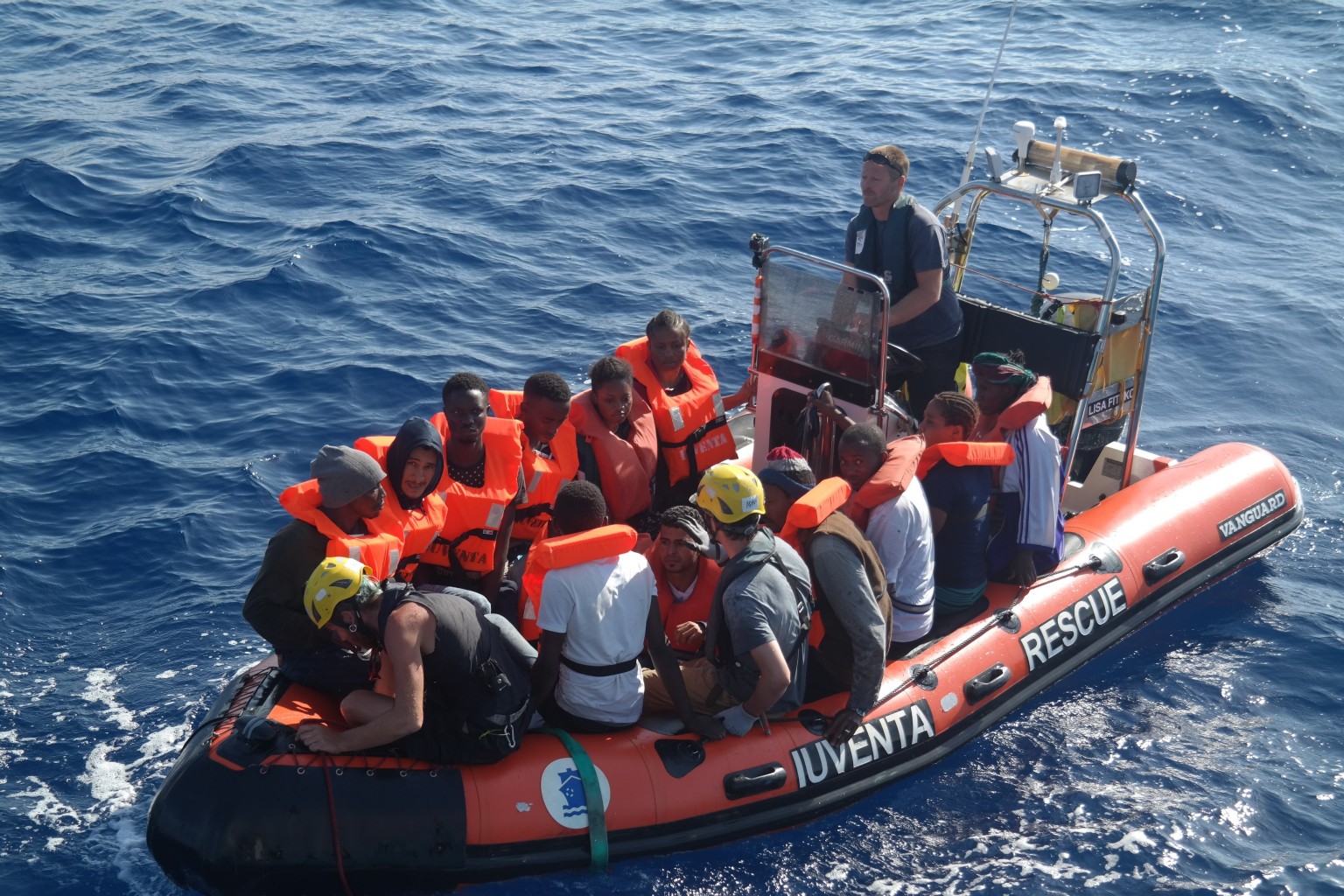 Four former crew members of the search and rescue ship Iuventa, which saved the lives of thousands of people in distress in the Mediterranean Sea, will this week find out if they are to face criminal charges for their lifesaving work. On 21 May, preliminary hearings are set to begin at the Court of Trapani, where a judge will decide whether the Iuventa crew should be charged with “facilitating illegal entry” of refugees and migrants to Italy. They could face up to 20 years in prison if found guilty at trial.

Kathrin Schmidt, Dariush Beigui, Sascha Girke and Uli Tröder, who worked on Iuventa between 2016 and 2017, are among 21 defendants who face prosecution for helping save lives at sea. Crew members from MSF’s and Save the Children’s rescue ships, as well as the organisations themselves, and an Italian shipping company, also stand accused.

“The Iuventa crew saved the lives of over 14,000 people seeking safety, stepping in where Europe was failing, until the ship was seized in August 2017. The case against these rescue workers must be dismissed and all charges dropped,” said Elisa De Pieri, Regional Researcher at Amnesty International.
“The prosecution’s claim that the people rescued were not in real danger is absurd – they were in overcrowded and unseaworthy boats, in a stretch of water that has claimed thousands of lives.”

Saving people in distress at sea

Under international maritime law, a vessel is obliged to aid people in peril at sea. The case against the Iuventa crew and other NGOs ignores this principle, as well as international law on the rights of refugees and migrants and on the protection of human rights defenders.

The rescue crews facing trial came to the aid of people who were leaving the violence and horrendous detention conditions they were subjected to in Libya in overcrowded, unseaworthy boats, yet the prosecution has questioned if they were in imminent danger. Contrary to what the prosecution has alleged, the rescues performed by the crews do not constitute human smuggling. The UN Smuggling Protocol requires a financial or other material benefit for the smuggler. Neither Italian nor EU legislation on facilitation of irregular entry are fully consistent with this. People assisting migrants and refugees at borders for humanitarian reasons can therefore be caught in unfair prosecutions. Amnesty has for years called for a reform of legislation on the facilitation of irregular entry in the European Union and in member states.

Why was the Iuventa at sea?

Starting in 2016, EU member states and institutions began to prioritize reducing the number of people arriving on European shores over the protection of their lives and other rights. In order to do this, they removed their maritime assets from the areas where most refugees’ and migrants’ boats run into difficulty, near Libyan waters, to avoid having to rescue them. NGO boats such as Iuventa stepped in to rescue those who were at risk.
EU member states also increased cooperation with the Libyan Coast Guard to enable them to pull back to Libya those who were trying to flee. Crucially, they also undertook measures to undermine the work of NGOs and activists who had stepped in to assist people on the move at borders, including misusing criminal and administrative laws and regulations to hinder and eventually stop the vital work of rescue NGOs.

Amnesty International will be in Trapani to support the Iuventa crew and show solidarity with human rights defenders who help people in danger and in need at borders. The organization will be observing the proceedings to ensure that the right to a fair trial is respected, and that the principle of transparency in the administration of justice is upheld.

“Time and again prosecutors have tried to criminalize people and organizations who saved lives after stepping into the void left by governments. So far most prosecutions in Europe have ended in acquittal or were quashed by courts, but it is scandalous that rescue workers have ended up in courtrooms at all,” said Elisa De Pieri.

“This case goes beyond the Iuventa – in effect, the duty to save lives at sea is being put on trial. The prosecution’s argument that those rescued were not in imminent danger is alarming and could have disastrous consequences for the thousands of people who are rescued at sea every year.”