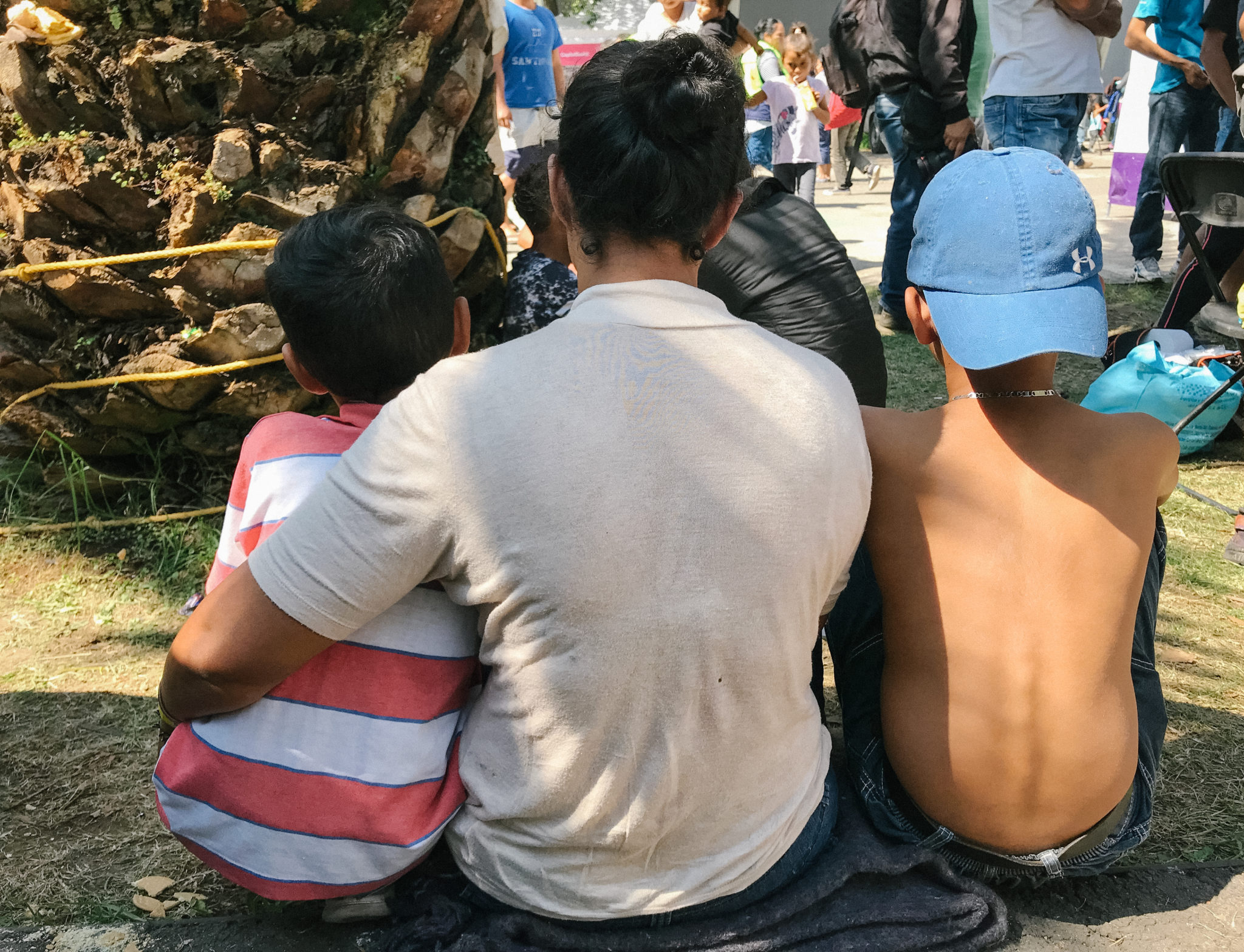 ‘It breaks my heart, but I have to keep going’: the Honduran women forced to leave their homeland

By Duncan Tucker and Louise Tillotson

MEXICO CITY – After 23 days of harsh travel through pouring rain and tropical heat, Suyapa takes a much-needed break at a sprawling shelter for members of the Central American migrant and refugee caravan in a sports complex in Mexico’s capital.

“It’s been really heavy going, especially for them,” she says, pointing to her two youngest sons, aged seven and ten. “One of them got sick but thank God he’s better now. We’ve walked a lot. They get exhausted, they’ve lost the skin on their feet and had to walk barefoot at times.”

Like many of the thousands of people traveling in a series of caravans from Honduras, El Salvador, Guatemala and Nicaragua, Suyapa left home out of necessity rather than choice.

While President Trump has called the caravan members “criminals” and deployed over 5,000 soldiers to prevent them from crossing the US-Mexico border, a great many of them are women and children simply searching for a safe place to rebuild their lives.

According to Mexico City authorities, children accounted for 1,726 of the 4,841 people registered at the shelter as of November 8, including 310 infants under five years old. About 30 percent of those registered were women.

Suyapa fled the Honduran city of San Pedro Sula after members of violent criminal networks known as maras extorted her modest food business, demanding all her weekly earnings, and then forced her eldest son to join them.

“He had no choice. I tried to stop it and they told me that if I stayed in the country they’d kill my family,” says Suyapa. “These aren’t idle threats, they follow through with them.”

The gang gave her three days to leave and never come back.

“What did I do? Leave my home, leave everything, just grab my kids and hide the others who would stay, because I had no other option.”

Suyapa says she was unaware of the caravan when she left home but soon heard about it and decided to join.

Hondurans comprise the majority of the first caravan to reach Mexico City en route to the United States. Many cite the endemic violence and lack of state protection as reasons for leaving a country with limited opportunities and widespread poverty.

Strewn with tents, strollers and clothes hung out to dry, Mexico City’s makeshift shelter is a relative haven for the caravan, with government workers and volunteers providing medical and dental care and three meals a day. Volunteer barbers give free haircuts and clowns entertain young children, while teenagers enjoy games of soccer. There are even shamans on hand to offer spiritual healing.

Sat on a swing, Claudia, 28, watches her three young children play. They are all wafer thin and the youngest is sick. Doctors at the shelter have looked at him but say he will need further clinical tests when they arrive at their destination.

Claudia’s family have traveled over a thousand miles, with one child in a pushchair and the others walking. They were forced to leave Honduras after a gang threatened them for failing to make “war tax” payments on her husband’s small business.

As Amnesty International documented last year, the extortions or “war taxes” that maras demand from businesses are commonplace in Central America, but refusing to comply puts one’s life at risk.

Before leaving, Claudia’s family closed their business and lived in daily fear of the gangs.

“The police have no authority there,” she says of why her family could not approach the authorities for help. If you report the gangs, she says, they will find out and “they will fuck you up”.

Now, Claudia says her priority is finding a safe place where her children can go to school.

She starts to cry as she describes how her kids ask when they are going home. “It breaks my heart, but I have to keep going.”

The Mexico City shelter represents a rare opportunity for those in the caravan to receive emotional support.

“It’s not easy for them to abandon their country. They’re having to deal with feelings of pain,” says Marlen Nava of the Mexican Institute for Emergency Psychology, one of several volunteer groups aiding members of the caravan.

“We’re seeing a lot of anxiety, a lot of stress, many physiological reactions, and a lot of reactive attachment disorder in children. If they’re separated from their parents they react with fear, crying or even regressions, like when a nine- or ten-year-old child suddenly starts talking like a baby again.”

The support that Nava and her colleagues can offer fleeting visitors is limited, and she is particularly concerned by what she describes as the “dehumanization” of those traveling in the caravan.

“Unfortunately, there’s a lot of stigma and they’re treated like criminals. Most of them are families, they’re women and single mothers who came with their children or on their own because they left their families behind to find a way of supporting them,” she says.

“We’re all human beings. I think everyone [should have] the opportunity to find what’s best for their family. We must respect their reasons for deciding to leave their countries.”

Lorena, a 30-year-old transgender woman who had been a sex worker in Honduras, says she left because of widespread homophobia that translated into constant violence from police and clients.

According to Amnesty International, transgender women in Central America are at particularly high risk of violence and extortion by gangs and abuse by police.

“In my country, [the authorities] don’t listen to you, they don’t take you seriously… because you are a homosexual,” Lorena says.

As transgender women often face further violence and discrimination in transit and destination countries, Lorena opted to join the caravan because she felt safer in a larger group. Although she expects to be detained upon reaching the United States, she believes it is worth the risk to escape the violence in Honduras.

Even with President Trump sending troops to the border, she says, “he can’t kill women and children.”

Although more difficult times lie ahead as the caravan weaves its way through northern Mexico, where temperatures are more extreme, infrastructure more sparse and organized crime more prevalent, most members of the caravan are undeterred.

Suyapa remains determined to reach the United States so she can raise her sons in safety.

“My dream is to get to the other side and be able to bring my children and have a better life, above all so that they can study in peace,” she says.

But it is a dream born of necessity and the unbearable circumstances in her homeland.

“Do you think I wanted to come here with my children? Never. I’d never have wanted to leave my country if life was different.”

*Names have been changed to protect the people interviewed