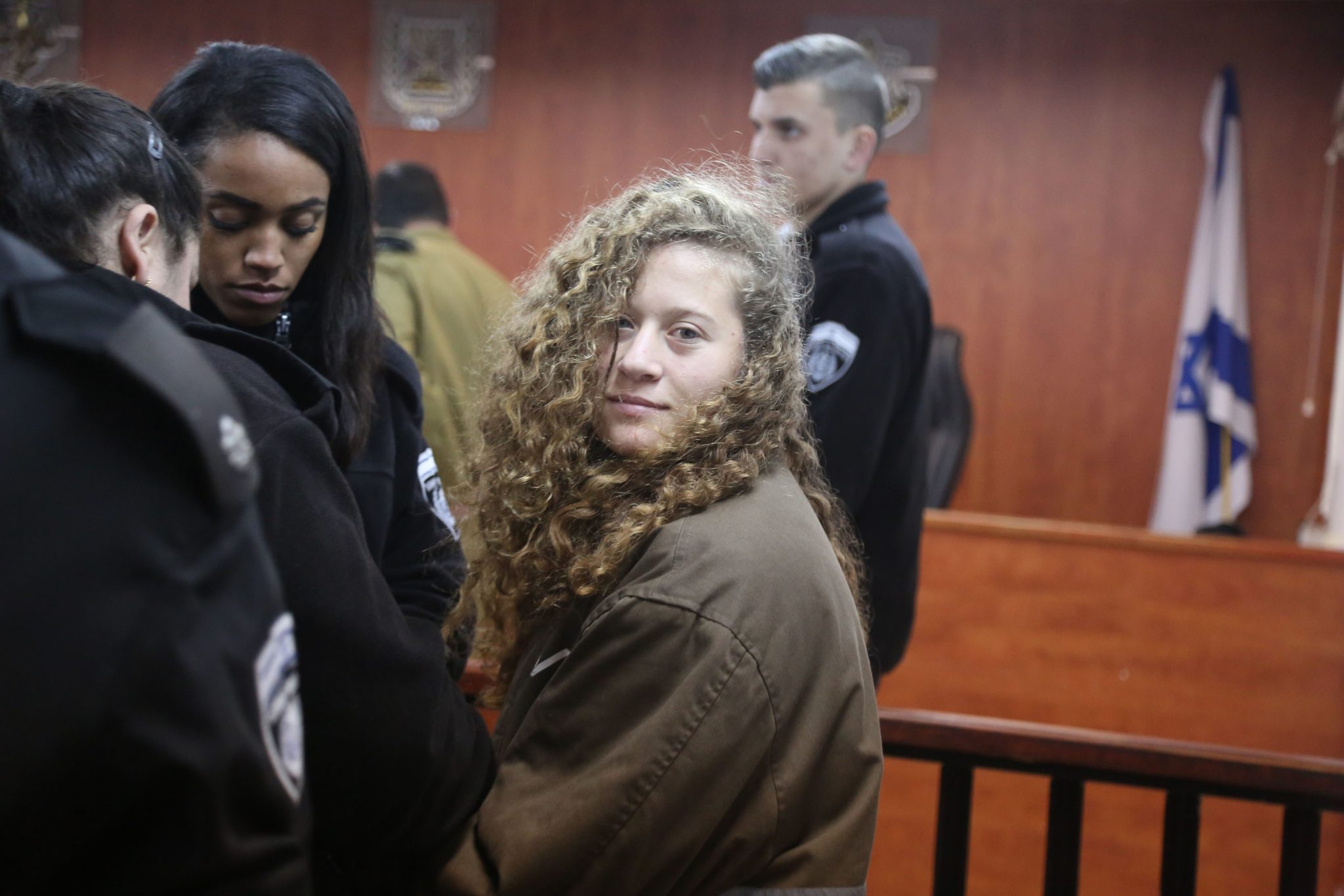 Israeli authorities must release a 16-year-old Palestinian activist who could face up to 10 years in prison over an altercation with Israeli soldiers in the occupied West Bank last month, Amnesty International said as she appeared in court today.

Ahed Tamimi will go before Ofer military court in the occupied West Bank accused of aggravated assault and 11 other charges after a video showing her shoving, slapping and kicking two Israeli soldiers in her home village of Nabi Saleh on 15 December went viral on Facebook.

“Nothing that Ahed Tamimi has done can justify the continuing detention of a 16-year-old girl. The Israeli authorities must release her without delay. In capturing an unarmed teenage girl’s assault on two armed soldiers wearing protective gear, the footage of this incident shows that she posed no actual threat and that her punishment is blatantly disproportionate,” said Magdalena Mughrabi, Deputy Director for the Middle East and North Africa at Amnesty International.

Ahed Tamimi was arrested on 19 December along with her mother, Nariman Tamimi, and cousin Nour Tamimi after Nariman, also a prominent activist, posted the footage online. Ahed confronted the soldiers amid a demonstration in Nabi Saleh against US President Donald Trump’s recent decision to recognize Jerusalem as the capital of Israel.

The incident took place on the same day that Ahed’s cousin, 15-year-old Mohammad Tamimi, was hit in the head at close range by a rubber bullet fired by an Israeli soldier. His family told Amnesty International that he required surgery that involved the removal of part of his left skull.

The video shows that the soldiers, who were standing on the edge of the family’s walled front yard and armed with assault rifles, were able to lightly swat away Ahed’s slaps and kicks.

However, the clip outraged many Israelis, with Education Minister Naftali Bennett telling Army Radio the three women “should finish their lives in prison”.

Four days after the incident, Ahed and Nariman, 42, were arrested by Israeli soldiers during a night raid on their home. Nour, 21, was arrested the following day but has since been released on bail.

On 1 January, Ahed and Nariman were both charged with aggravated assault of soldiers and preventing soldiers from carrying out their duties.

Ahed now faces a total of 12 charges, also including incitement on social media and offences related to five other altercations with Israeli soldiers she is alleged to have taken part in over the past two years.

Under the Convention on the Rights of the Child, to which Israel is a state party, the arrest, detention or imprisonment of a child must be used only as a measure of last resort and for the shortest appropriate period of time.

“It would be an unconscionable travesty of justice if Ahed Tamini’s act of defiance in the face of relentless oppression earns her a long prison sentence after a trial in a military court that does not ensure basic fair trial standards.”

The Israeli army prosecutes hundreds of Palestinian children in juvenile military courts every year, often after arresting them in night raids and systematically subjecting them to ill-treatment, including blindfolding, threats, harsh interrogations without the presence of their lawyers or families, solitary confinement and in some cases physical violence. There are currently some 350 Palestinian children in Israeli prisons and detention centres, according to local human rights organizations.

Ahed’s lawyer said she has faced several long and aggressive interrogation sessions, sometimes during the night, and has received threats against family members by her interrogators.

According to her family, Ahed has also endured several physically exhausting transfers from prison to court alongside other child detainees, without access to a toilet.

Also this week, Ahed’s father, Bassem Tamimi – a former Amnesty International prisoner of conscience – was banned from international travel. The Israeli authorities have also issued a threat to a further 20 members of the Tamimi family that they could be banned from residing in Nabi Saleh.

According to Defense for Children Palestine (DCI), approximately 500-700 Palestinian children from the occupied West Bank are prosecuted every year through Israeli juvenile military courts under Israeli military orders.

These military orders are enforced through the military courts and many criminalize peaceful activities such as peaceful political expression or organizing and attending protests without prior permission from an Israeli military commander.

The judges and the prosecution are part of the Israeli military, and the jurisdiction of the Israeli military court system is never applied to Israeli settlers living in the West Bank, who are governed by Israeli civil law. Incidents of settler violence in the West Bank normally go unpunished, while Palestinians are routinely targeted and arrested.

The small village of Nabi Saleh, located north-west of Ramallah in the occupied West Bank, has since 2009 been the scene of regular Friday protests against Israeli military occupation, the theft of its land and the loss of the community’s water source. The Israeli army routinely uses excessive force against protesters and bystanders, and has in many cases deliberately damaged private property. Since 2009, three residents have been killed by Israeli soldiers, while suffered injuries caused by live ammunition, rubber-coated metal bullets and tear gas.