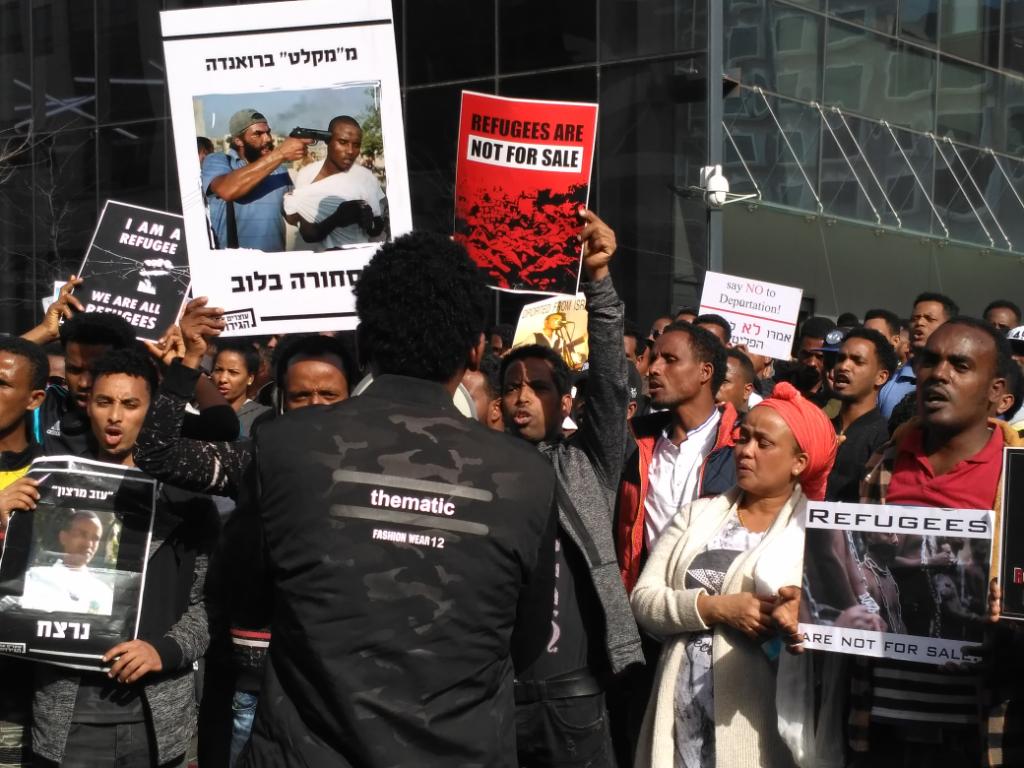 Israel: Deportation of African asylum-seekers is a cruel and misguided abandonment of responsibility

Israel’s policy of deporting African asylum-seekers to two unnamed African countries is an abdication of its responsibility to refugees and an example of the vicious political measures feeding the “global refugee crisis”, Amnesty International said today as the Israeli Supreme Court considers new evidence on the legality of the policy.

Israel has allegedly reached agreements with two countries – widely understood to be Uganda and Rwanda. The terms of the agreements are classified.

Under the government’s new “Procedure for Deportation to Third Countries”, launched in January, those who agree to leave are given US$3,500 and a ticket to either their country of origin or an unnamed “third country”. Those who refuse face indefinite detention. The Israeli government claims the scheme facilitates “voluntary departures” of “infiltrators”.

“How can the Israeli government possibly describe this as a way of deporting asylum-seekers ‘voluntarily’ when the alternatives are returning to persecution or indefinite detention? This is not a choice anyone should have to make,” said Philip Luther, Amnesty International’s Research and Advocacy Director for the Middle East and North Africa.

“Considering the scale of the global refugee crisis, the forced – and illegal – deportation of Eritrean and Sudanese asylum-seekers is a reckless abandonment of responsibility. This is an example of the ill-thought-out policies that have become a hallmark of dysfunctional asylum and immigration processes.”

Under the policy of the Israeli Population, Immigration and Border Authority, Eritrean and Sudanese male “infiltrators” are required to leave Israel by 4 April. The “Procedure for Deportation to Third Countries” is based on the premise that the deportees either never sought asylum and have lived in Israel irregularly, or sought asylum but did not qualify for it. Those who submitted their application after 1 January will be deported as well.

The Israeli government has not provided details of the agreements, including the identity of the “third countries”, which it considers to be confidential and potentially harmful to Israel’s international reputation. Rwanda and Uganda have denied the existence of the agreements.

Israel boasts one of the highest gross domestic products (GDPs) in the world, making it one of the most prosperous and wealthy countries in the Middle East region.

“There is an onus of responsibility on the Israeli government to respond to the global refugee crisis as many other wealthy nations have – by accepting asylum-seekers in desperate need of a home. It beggars belief that the Israeli authorities are now foisting their responsibility on countries who have only a fraction of the wealth and resources and their own much larger refugee populations,” said Philip Luther.

Israel’s deportations to Rwanda and Uganda are illegal

The agreements between Israel and the unnamed African countries, whatever their identity, are illegal under international law as they violate the prohibition of non-refoulement. This is the prohibition against transferring anyone to a place where they would be at real risk of persecution and other serious human rights violations, or where they would not be protected against such a transfer later.

The Israeli Supreme Court has rightly pointed out that the secret nature of the agreements denies asylum-seekers legal protection or access to legal recourse.

Furthermore, many of those deported under the policy have no choice but to continue their journey through Libya and attempt dangerous crossings of the Mediterranean to Europe.

“This policy has put the asylum-seekers in an extremely vulnerable position as they are exposed to the risk of being sent back to their country of origin and cannot hold the Israeli government, or the government of the third country, to account,” said Philip Luther.

“We have documented several cases of asylum-seekers deported from Israel who were promised residency and work permits in Uganda and Rwanda, only to find that none of this was available upon arriving in the new country.”

In fact, none of the Eritrean and Sudanese asylum-seekers deported to Rwanda and Uganda – and later interviewed by NGOs, academics and the United Nations refugee agency (UNHCR) – were granted regular status upon arrival.

Rwanda and Uganda have not only denied the presence of asylum-seekers arriving from Israel in their territory; they have also refused to acknowledge any duty towards them by denying that any agreement with Israel exists.

Over the past decade, only 0.1% of Eritrean asylum-seekers have been recognized as refugees in Israel. By comparison, the rate of recognition of Eritrean nationals who applied for refugee status in the EU in 2016 was 92.5%.

The main reason for the dramatically low recognition rate of Eritrean asylum-seekers is that Israel does not consider deserters from the Eritrean military service to qualify for refugee status. This goes against the eligibility guidelines issued by UNHCR.

In January 2018, the Israeli Supreme Court found the Israeli government’s interpretation of the protection needs of deserters from the Eritrean military service to be incompatible with the 1951 Refugee Convention. On 22 March, Deputy Attorney General Dina Zilber instructed the Population, Immigration and Border Authority to re-examine the cases of Eritreans held in Saharonim Prison whose claims for asylum had been rejected.

“The Israeli authorities need to know that the world is watching with outrage at their brazen disregard for human life, dignity and responsibility to the wider global community.”