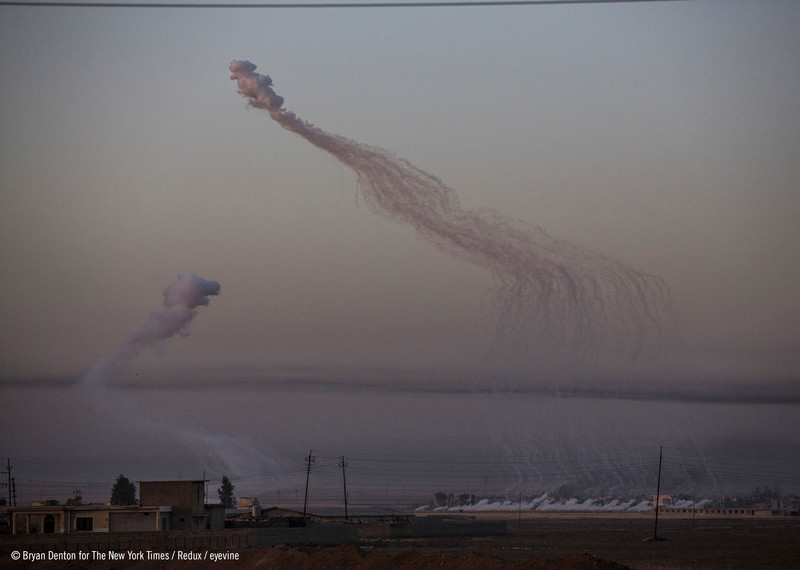 The use of white phosphorus around the city of Mosul could pose a deadly risk to civilians fleeing the fighting in the coming days and weeks, Amnesty International said today. The organisation received credible witness and photographic evidence of white phosphorus projectiles exploding in the air over an area north of the village of Karemlesh, about 20 kilometres east of Mosul. White phosphorus is an incendiary substance which burns at extremely high temperatures upon exposure to air.

“White phosphorus can cause horrific injuries, burning deep into the muscle and bone. It is possible that some of it will only partially burn and could then reignite weeks after being deployed. This means that civilians who flee the fighting around Mosul or residents returning to check on their homes in Karemlesh in the coming days or weeks would be at risk of serious harm even though there may be few visible warning signs,” said Donatella Rovera, Senior Crisis Response Adviser at Amnesty International.

Karemlesh has been depopulated since the predominately Assyrian population fled the armed group calling itself Islamic State (IS) in August 2014, but white phosphorus poses a clear and present danger to civilians fleeing Mosul towards Erbil who may pass through the contaminated area.

“We are urging Iraqi and coalition forces never to use white phosphorus in the vicinity of civilians. Even if civilians are not present at the time of its use, due to the residual risks they should not use airburst white phosphorus munitions unless it is absolutely necessary to achieve military objectives which cannot be accomplished through safer means,” said Donatella Rovera.

Photographs taken by a New York Times photographer on 20 October show white phosphorus munitions bursting near Karemlesh. Clashes between IS and Iraqi government forces were taking place in Hamdaniya (Qaraqosh), a few kilometres south of Karemlesh at the time. The photographer told Amnesty International that he witnessed the same munitions being deployed at different times of the day, including four over a 15-minute period. It is not clear whether the projectiles were fired by Iraqi central government forces, Peshmerga forces of the Kurdistan Regional Government (KRG), or forces belonging to members of the US-led coalition.

The photographs show a dispersal pattern that appears consistent with the US-made 155-mm M825A1 projectile, which ejects 116 felt wedges containing white phosphorus over an area between 125 – 250 metres wide. Amnesty International documented its use in Gaza during Israel’s 2008-2009 Operation Cast Lead.

White phosphorus is most often used to create a dense smoke screen that can obscure the movement of troops from enemy forces, and to mark targets for further attack, although it is not yet clear why it was used in this case. While its use for such purposes is not prohibited, extreme caution is warranted whenever it is deployed. It should never be used in the vicinity of civilians.

If buried by soil or water, white phosphorus wedges can be temporarily extinguished, but they spontaneously reignite if they are uncovered, presenting a serious hazard for unsuspecting civilians who may accidentally uncover them as they walk through the affected area. White phosphorus should never be used as an anti-personnel weapon.

“It is absolutely imperative that the forces using white phosphorus publicise details of areas potentially contaminated by the substance, to minimise the risk of accidental harm to civilians. Such information is also crucial for medical professionals operating in Iraq so that they are aware of the kind of injuries they are treating. Tragically we witnessed people dying in Gaza because doctors were not aware that their patients’ burns were caused by white phosphorus and were thus not able to dispense the right treatment, resulting in the wounds deteriorating,” said Donatella Rovera.

Residents of Mosul and surrounding areas under the control of the armed group calling itself Islamic State (IS), are facing huge risks as IS prevents them from leaving and they risk being caught in the cross fire as the battle to recapture the area continues. No effort should be spared to avoid exposing them to further risks.

Amnesty International has previously highlighted that white phosphorus is particularly prone to indiscriminate effects, and therefore its use in the vicinity of civilian concentrations constitutes an indiscriminate attack and can be a war crime.

An operation by Iraqi and Kurdish forces, supported by the US-led international coalition, to retake Mosul, Iraq’s second largest city, from the (armed group calling itself Islamic State) IS began on 17 October. Upwards of 10,500 people have been displaced since then, while up to 1.5 million people remain trapped in Mosul and its outskirts.