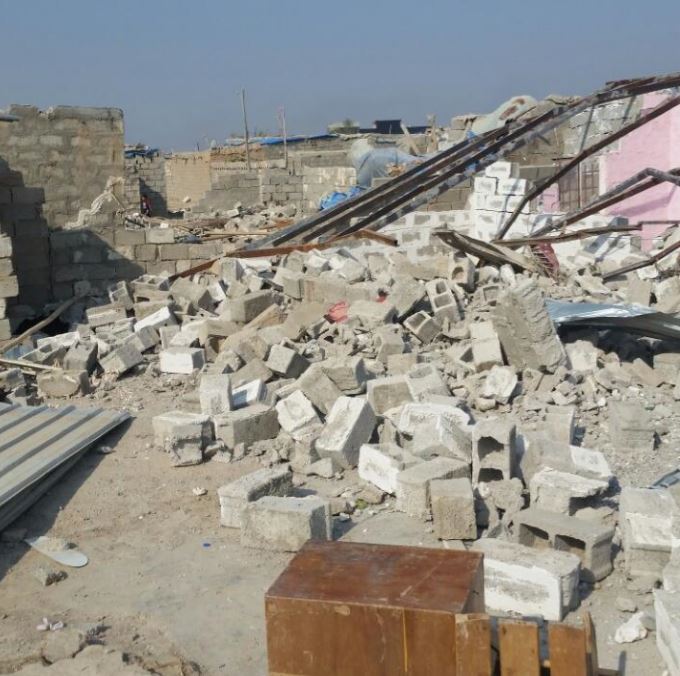 Kurdish authorities have carried out a wave of attacks, demolishing the homes and driving out hundreds of Arabs from Kirkuk, as apparent revenge for an attack carried out by the armed group calling itself the Islamic State (IS) on 21 October, said Amnesty International in a new briefing published today.

The briefing, ‘Where are we supposed to go?’: Destruction and forced displacement in Kirkuk, highlights how hundreds of Sunni Arab residents, including many who fled fighting and insecurity in nearby governorates, have been expelled from Kirkuk. Many have been ordered to return to their places of origin or have been confined to camps after being suspected of assisting IS to co-ordinate the attack.

“The authorities in Kirkuk are undeniably facing a serious security threat, but that cannot justify bulldozing people’s homes and forcibly displacing hundreds of Arab residents. Many of those affected are people who have already been forced to leave their homes because of the violence engulfing the country. Now they are being forcibly displaced or made homeless yet again,” said Lynn Maalouf, Deputy Director for Research at Amnesty International’s Beirut regional office.

In the aftermath of the surprise IS attack on eight different locations across Kirkuk on 21 October, many said they were ordered to leave the area and had their identity cards confiscated. Among those affected are an estimated 250 families who had previously been displaced from other governorates of Iraq and had sought safety and shelter in Kirkuk. At least 190 families were also forcibly displaced by Kurdish Peshmerga and Asayish forces from the Qotan and Qoshkaya villages in the Dibis district of Kirkuk governorate. Most were moved to camps for internally displaced people or sought shelter with relatives in nearby villages. IS forces had attacked a power station in Dibis on 21 October killing 12 guards and employees.

“Forcibly evicting and displacing Sunni Arab residents of Kirkuk is unlawful and cruel. Kurdish authorities must immediately put an end to unlawful destruction of civilian property and forced displacement. Deliberate destruction carried out without military necessity is a war crime. Ordering the displacement of civilians – unless necessary for their own security or for reasons of imperative military necessity – also is a war crime,” said Lynn Maalouf.

The briefing, based on interviews with community leaders, internally displaced people, residents, activists, and local politicians, is supported by photographic evidence of destruction and statements from officials.

“Muhayman”, whose name has been changed to protect his identity, a 40-year-old father of 10 from a village south-west of Kirkuk, has been forcibly displaced twice by Kurdish forces, first in 2015 and most recently on 25 October 2016. He described to Amnesty International how men in military uniform came to the Manshiya area of the Wahed Huzairan neighbourhood of Kirkuk city and ordered residents to leave by morning. Early the next day they were forcibly evicted and bulldozers demolished homes late into the night.

“I was ordered by Peshmerga out of my own village, so I built a home here… Now we are homeless again, and we are all sheltering with my brother. Where are we supposed to go?” The neighbourhood, which had consisted of hundreds of houses, was razed to the ground leaving only around 10 homes standing, he said.

“Ahmed” a resident of Kirkuk city, whose home was demolished on 25 October described chaotic scenes as residents rushed to save their possessions while tractors and bulldozers rolled into the neighbourhood. He said one of his neighbours was so distressed he shot himself after his home was demolished. Other residents interviewed by Amnesty International corroborated this account.

One man who fled from Diyala to Kirkuk in August 2014 with his family said security forces openly blamed him for the IS attack. “We give martyrs to fight Daesh [Arabic acronym for IS] and you bring them here and harbour them in these houses,” they told him. He was forced to go back to Diyala together with his relatives despite the well-documented pattern of unlawful killings and abductions of Sunni Arabs at the hands of militias there.

Publicly, the Governor of Kirkuk has committed not to return internally displaced people to areas still under IS control or where clashes are ongoing such as Mosul and the surrounding areas. International law and standards dictate that the return of displaced people to their homes must be voluntary.

Amnesty International has documented the repeated forced displacement and destruction of Arab homes and villages by Peshmerga forces, which continue to prevent residents of Arab villages and Arab residents of mixed Arab and Kurdish towns from returning to their homes.

“Instead of flouting international law by arbitrarily uprooting civilians from their homes, the Kurdish and Iraqi authorities should be offering protection to those who have already been displaced or are seeking shelter from the fighting. And they should facilitate the voluntary and safe return of those who wish to return to their homes,” said Lynn Maalouf.