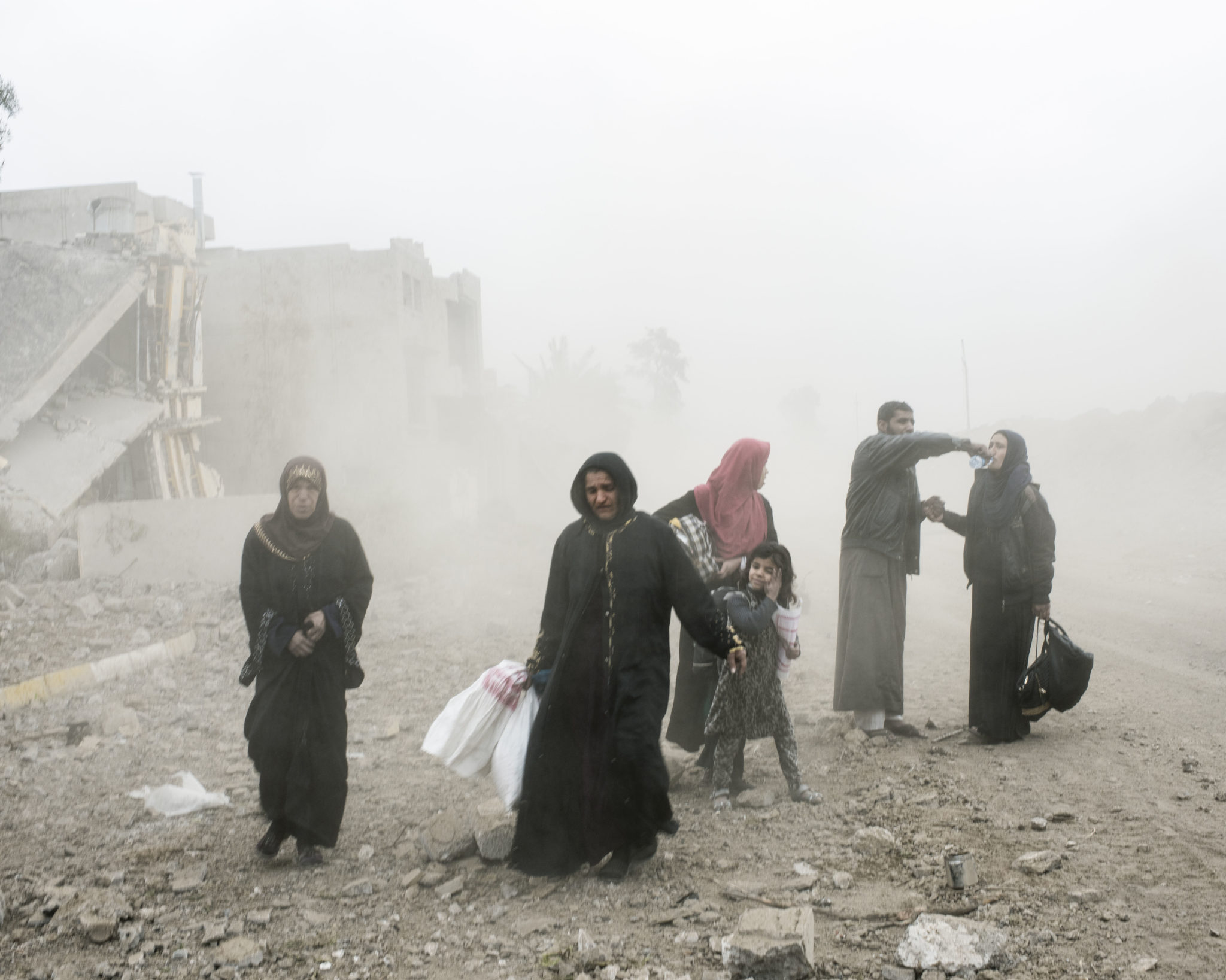 A new report by Amnesty International uncovers the horrifying scale of death, injury and suffering of civilians trapped in the battle for west Mosul. The report documents how the group calling itself the Islamic State (IS) moved civilians from neighboring villages into the zones of the battle in west Mosul, trapped them in their homes and prevented them from escaping, using them as human shields. Meanwhile Iraqi and coalition forces failed to take adequate measures to protect civilians, instead subjecting them to a terrifying barrage of fire from weapons that should never be used in densely populated civilian areas.

At any cost: The civilian catastrophe in West Mosul, Iraq, covers hostilities in west Mosul from January to mid-May 2017. Amnesty researchers interviewed 151 west Mosul residents, experts and analysts, and documented 45 attacks in total, which killed at least 426 civilians and injured more than 100, providing analysis for nine specific attacks by Iraqi forces and the US-led coalition.

“The scale and gravity of the loss of civilian lives during the military operation to retake Mosul must immediately be publicly acknowledged at the highest levels of government in Iraq and states that are part of the US-led coalition. The horrors that the people of Mosul have witnessed and the disregard for human life by all parties to this conflict must not go unpunished. Entire families have been wiped out, many of whom are still buried under the rubble today. The people of Mosul deserve to know, from their government, that there will be justice and reparation so that the harrowing impact of this operation is duly addressed. An independent commission must immediately be established, tasked with ensuring that any instances where there is credible evidence that violations of international law took place, effective investigations are carried out, and the findings made public,” said Colm O’Gorman, Executive Director of Amnesty International Ireland.

“Abu Haidar” a man from the village of Tel Arbeed who was forced to move into west Mosul by IS, told Amnesty International:

“[IS] said you must leave, or you will be killed. We were brought as human shields. They brought us to stand between them and the missiles. All of this happened just before the operation for west Mosul started… When the Iraqi forces went forward, IS fell back, and they took most of the civilians with them.”

To prevent civilians from evacuating to safety, IS trapped people inside their homes by welding their doors shut, rigging booby traps at exits, and summarily killing hundreds, perhaps thousands, of people attempting to escape.  Mosul resident “Mohsen” told Amnesty International: “They came to us in a pick-up truck, with a generator in the back, and then they welded shut the gap between the two doors… They did this to our door, and even worse, they did it to another house in our neighbourhood where hundreds of people were staying.”

The fear of being killed by IS while escaping meant that many civilians had to wait until the clashes reached their peak. Once IS fighters were busy fighting, civilians would run directly through the front lines to reach Iraqi forces.

Violations by Iraqi forces and US-led coalition: Unlawful attacks and use of imprecise, explosive weapons
Because IS was forcing civilians to move into the fighting and preventing them from escaping, IS-controlled areas in west Mosul became more and more crowded with civilians as the battle raged on. Iraqi forces and the US-led coalition failed to adapt their tactics to this reality and continued to use imprecise, explosive weapons with wide area effects in densely populated urban environments.

“IS’s use of people as human shields does not lessen the legal obligation of pro-government forces to protect civilians. Military planners should have taken extra care in the manner in which they used their weapons to ensure that these attacks were not unlawful,” said Colm O’Gorman.

Amnesty International documented a pattern of attacks in which US-led coalition and Iraqi forces appear not to have struck their intended military targets, instead killing and injuring civilians and destroying or damaging civilian objects. In some cases, civilian deaths and injuries appear to have resulted from a choice of weapons that was inappropriate for the circumstances or failure to take necessary precautions to verify the target was a military objective.

Even in attacks that seem to have struck their intended military target, the use of what seem to be unnecessarily powerful weapons or failure to take necessary precautions resulted in needless loss of civilian lives. For example, on 17 March 2017 a US airstrike on the Mosul al-Jadida neighbourhood killed at least 105 civilians in order to neutralise two IS snipers. Regardless of whether – as the US Department of Defense has maintained — secondary explosions occurred, it should have been clear to those responsible that the risk posed to civilians by using a 500lb bomb was clearly excessive in relation to anticipated military advantage.

Mohamed from al-Tenak neighbourhood, west Mosul told Amnesty International: “The strikes targeted the IS snipers. A strike would destroy an entire house of two storeys. They shelled during night and day. They hit so many houses. They’d hit one house and also destroy the two houses on either side. They killed a huge number of people.”

“Iraqi forces and members of the US-led coalition must ensure that the fight against IS – not only in the fight for Mosul, but in other battles in Iraq and in Syria – is fought in a way that is consistent with international law and standards. States engaged in this fight must not only focus on the military aspect of this fight, but also deploy in conjunction the resources needed to alleviate the incredible suffering of civilians trapped by conflict and abused by IS,” said Colm O’Gorman.