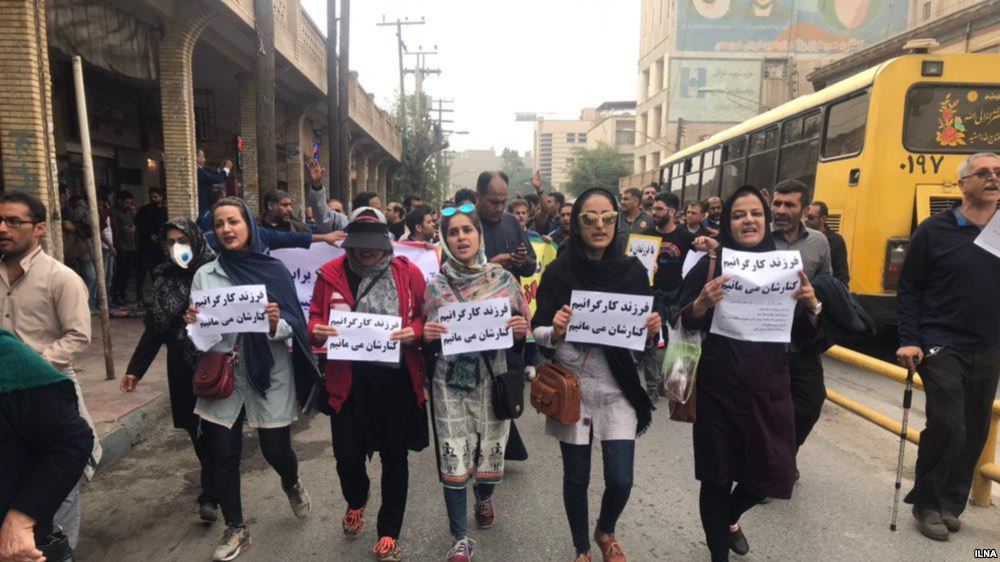 Iran’s ‘year of shame’: More than 7,000 arrested in chilling crackdown on dissent during 2018

The Iranian authorities carried out a shameless campaign of repression during 2018, crushing protests and arresting thousands in a wide-scale crackdown on dissent, said Amnesty International, a year after a wave of protests against poverty, corruption and authoritarianism erupted across the country.

The organization has today revealed staggering new figures showing the extent of the Iranian authorities’ repression during 2018. Over the course of the year, more than 7,000 protesters, students, journalists, environmental activists, workers and human rights defenders, including lawyers, women’s rights activists, minority rights activists and trade unionists, were arrested, many arbitrarily. Hundreds were sentenced to prison terms or flogging and at least 26 protesters were killed. Nine people arrested in connection with protests died in custody under suspicious circumstances.

“2018 will go down in history as a ‘year of shame’ for Iran. Throughout the year Iran’s authorities sought to stifle any sign of dissent by stepping up their crackdown on the rights to freedom of expression, association and peaceful assembly, and carrying out mass arrests of protesters,” said Philip Luther, Amnesty International’s Middle East and North Africa Research and Advocacy Director.

“The staggering scale of arrests, imprisonments and flogging sentences reveal the extreme lengths the authorities have gone to in order to suppress peaceful dissent.”

Throughout the year and particularly during the months of January, July and August, the Iranian authorities violently dispersed peaceful demonstrations, beating unarmed protesters and using live ammunition, tear gas and water cannons against them. Thousands of people were arbitrarily arrested and detained.

Some of those swept up in the wave of arrests during the January protests were students, human rights defenders and journalists. Also targeted were the managers of channels on the popular mobile messaging application Telegram, which was used to disseminate news about the protests and to mobilize demonstrators.

Overall in 2018, whether in the context of protests or as a result of their work 11 lawyers, 50 media workers and 91 students were detained arbitrarily.

At least 20 media workers were sentenced to harsh prison or flogging sentences after unfair trials. One journalist, Mohammad Hossein Sodagar, from the Azerbaijani Turkic ethnic minority, was flogged 74 times in the city of Khoy in West Azerbaijan province after being convicted of “spreading lies”. Another media worker, Mostafa Abdi, who is an administrator of the Majzooban-e-Noor website, which reports on human rights abuses against the Gonabadi Dervish religious minority, was sentenced to 26 years and three months in prison, 148 lashes, and other punishments.

In addition, at least 112 women human rights defenders were arrested or remained in detention in Iran during 2018.

Throughout 2018, brave women’s rights defenders across the country joined an unprecedented protest movement against the abusive and discriminatory forced hijab (veiling) laws in Iran. Women took to the streets and stood on top of raised structures in public places, silently waving their headscarves on the ends of sticks. In response, they suffered a bitter backlash from the authorities, facing violent assault, arrest and torture and other ill-treatment. Some were sentenced to prison terms after grossly unfair trials.

Shaparak Shajarizadeh was sentenced to 20 years in prison, 18 of which were suspended, for her peaceful protest against forced hijab. She fled Iran after she was released on bail and has since described in media interviews how she was subjected to torture and other ill-treatment in solitary confinement and denied access to her lawyer.

Nasrin Sotoudeh, a prominent human rights lawyer and women’s rights defender, who represented Shaparak Shajarizadeh, was herself arrested on 13 June 2018 for defending protesters against forced hijab. She faces several national security-related charges which could see her sentenced to more than a decade in prison, in addition to the five-year sentence she is already serving for her work against the death penalty.

“Throughout 2018, the Iranian authorities waged a particularly sinister crackdown against women’s rights defenders. Instead of cruelly punishing women for demanding their rights, the authorities should put an end to the rampant and entrenched discrimination and violence they face,” said Philip Luther.

The year 2018 also saw Iran engulfed in a deepening economic crisis which triggered numerous strikes and spurred workers to take to the streets in their thousands to call for better working conditions and protections by the government. Delays and non-payment of wages amidst high levels of inflation, skyrocketing living costs and poor working conditions also provoked protests.

Instead of addressing their complaints, however, the Iranian authorities arrested at least 467 workers, including teachers, truck drivers and factory workers, summoned others for questioning and subjected many to torture and other ill-treatment. Dozens were sentenced to prison terms. Iranian courts also handed down flogging sentences amounting to a total of nearly 3,000 lashes against 38 workers.

On 10 May, the Iranian authorities violently dispersed a peaceful protest by teachers in Tehran, who were calling for higher wages and better funding of the country’s public education system. By the end of the year, the authorities had arrested at least 23 teachers following nationwide strikes in October and November. Eight were sentenced to between nine months and 10 and a half years in prison, 74 lashes each, and other penalties.

Throughout the year, at least 278 truck drivers were arrested and some threatened with the death penalty after they took part in nationwide strikes demanding better working conditions and higher wages. Following strikes in February and November, dozens of striking workers from the Haft Tapeh Sugar Cane Company in Shush, south-west Iran, were arrested.

“From underpaid teachers to factory workers struggling to feed their families, those who have dared to demand their rights in Iran today have paid a heavy price. Instead of ensuring workers’ demands are heard, the authorities have responded with heavy handedness, mass arrests and repression,” said Philip Luther.

During 2018, Iran also intensified its discriminatory crackdowns against religious and ethnic minorities by arbitrarily arresting and imprisoning hundreds, and curtailing their access to education, employment and other services.

Members of Iran’s largest Sufi order, the Gonabadi Dervish religious minority, faced a particularly vicious crackdown after a peaceful protest they held in February 2018 was violently quashed. Hundreds were arrested and more than 200 were sentenced to a total of 1,080 years in prison, 5,995 lashes as well as internal “exile”, travel bans, and bans on joining political and social groups. One person, Mohammad Salas, was sentenced to death after a grossly unfair trial and swiftly executed.

At least 171 Christians were arrested in 2018 solely for peacefully practising their faith, according to the organization Article 18. Some received sentences of up to 15 years in prison.

The authorities also continued their systematic persecution of the Baha’i religious minority, arbitrarily detaining at least 95, according to the organization Baha’i International Community, and committing other abuses against them.

Hundreds of Ahwazi Arabs were rounded up after protests in April over a state TV broadcast which excluded Ahwazi Arabs from a map showing the location of Iran’s ethnic minorities. In October, following a deadly armed attack on a military parade in Ahvaz the previous month, more than 700 Ahwazi Arabs were detained incommunicado according to activists outside Iran.