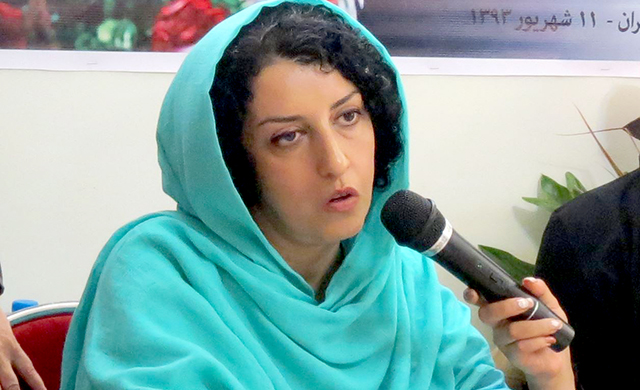 Responding to the arbitrary arrest of prominent human rights defender Narges Mohammadi on 16 November 2021 in Karaj, Alborz province, while attending a memorial for Ebrahim Ketabdar, who was killed by Iranian security forces during nationwide protests in November 2019, Heba Morayef, Regional Director for the Middle East and North Africa said:

“Narges Mohammadi is a prisoner of conscience targeted solely for her peaceful human rights activities and is now at imminent risk of receiving 80 lashes. We call on the Iranian authorities to immediately and unconditionally release her, quash her unjust sentence and ensure she is protected from all forms of torture and other ill-treatment, including floggings.

“To arrest a human rights defender for calling for truth and justice on the two-year anniversary of the November 2019 protests, where hundreds of men, women and children were killed by Iranian security forces, is a callous act – and another reminder of the crisis of systemic impunity in Iran for crimes under international law.

“For far too long, the Iranian authorities have subjected Narges Mohammadi to arbitrary detentions, unjust prosecutions, torture and other ill-treatment for her human rights work. Amnesty International urges the international community, including the United Nations and the European Union, to speak out about her case and put the unbridled repression of Iranian human rights defenders into scalpel-sharp focus.”

Narges Mohammadi is the vice president of the Centre for Human Rights Defenders in Iran and worked with the Campaign for Step-by-Step Abolition of the Death Penalty (known as Legam, its Persian acronym). Following the November 2019 nationwide protests and unlawful killing of hundreds of protesters, Narges Mohammadi vocally supported bereaved family members seeking truth and justice for their loved ones’ killings.

In May 2021, Branch 1188 of Criminal Court Two in Tehran sentenced Narges Mohammadi to two-and-a-half years in prison, 80 lashes and two separate fines for charges that include “spreading propaganda against the system.” Four months later, in September, Narges Mohammadi received a summons to begin serving this sentence, but she did not respond as she considered the conviction unjust.

She was arbitrarily arrested on 16 November 2021 by agents from Iran’s ministry of intelligence who, according to her husband, brutally beat Narges Mohammadi before taking her to an unknown location. The following day, she called her family and informed them that she was in Tehran’s Evin prison and told she was to serve a two-and-a-half-year prison sentence.

Narges Mohammadi had also been arbitrarily arrested in May 2015 and sentenced in 2016 to 16 years in jail on charges solely related to her freedom of expression and assembly.

Following global action, including by Amnesty International, Narges Mohammadi was released from prison in October 2020, yet since then the Iranian authorities have repeatedly subjected her to harassment, torture and other ill-treatment.

Flogging as carried out in Iran invariably constitutes torture, which is a crime under international law and prohibited absolutely under Article 7 of the International Covenant on Civil and Political Rights (ICCPR), to which Iran is a state party.