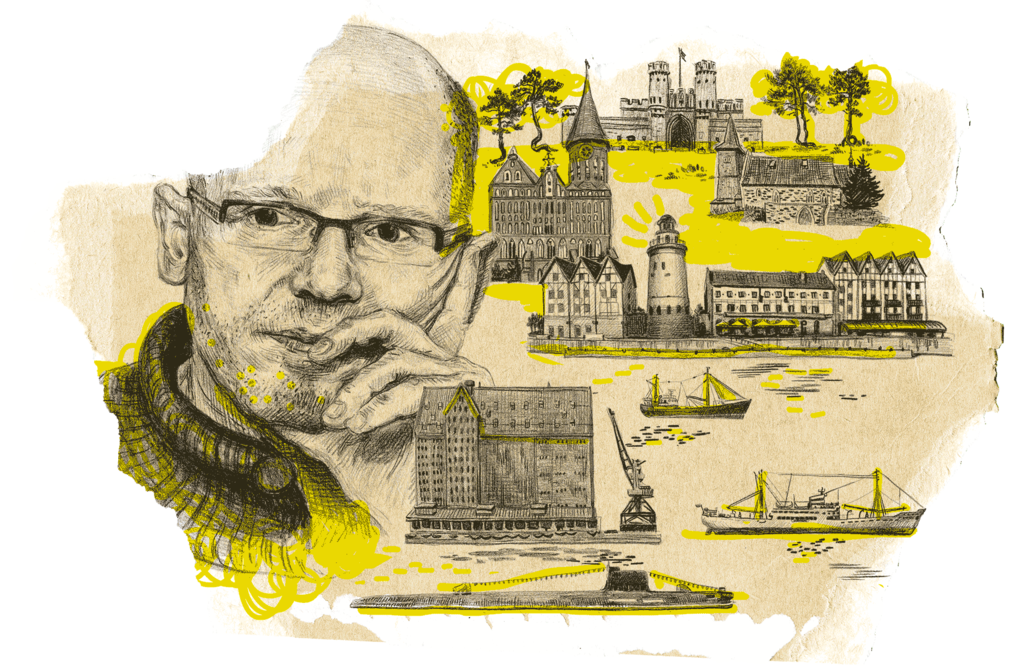 Yuriy Grozmani, acting editor–in–chief of Novye Kolyosa newspaper. He received threats on many occasions. In 1998 and again in 2016, there were attempts on his life and several bogus criminal proceedings were initiated against him.

I have known Igor Rudnikov since 1994. At the time, he served as Lieutenant Commander in the Baltic Fleet and also wrote for a military newspaper called Strazh Baltiki (The Guardian of the Baltic Sea). The newspaper had a supplement called Kolyosa (The Wheels). I also served at the time with the Air Defence Force and wanted to work in journalism. I offered Igor an article for publication and this is how we met. In May 1995, Igor left the Navy and founded the Novye Kolyosa (The New Wheels) newspaper.

We started out publishing articles related to vehicles and driving, and wrote about road building and corrupt officials who were involved in it. Later, Igor also decided to cover more general local news and politics. He did a great deal of work to expose cases of corruption. Following our investigations, many corrupt officials were dismissed from their posts and could do no more damage to society. In its own way, Novye Kolyosa cleansed the society. I sometimes think that our newspaper helped to shape the mindset of Kaliningrad’s residents.

It is not surprising that many people hold a grudge against Igor. He received threats on many occasions. In 1998 and again in 2016, there were attempts on his life and several bogus criminal proceedings were initiated against him. In November 2017, he was arrested following allegations of extorting USD 50,000 from Viktor Ledenyov, the Head of the Investigative Committee in Kaliningrad Region. Currently, Igor Rudnikov is held in Lefortovo pre-trial detention centre in Moscow. He has denied the allegations and believes the criminal case against him to be a provocation to intimidate and silence him.

We decided to continue to publish the newspaper without Igor. Security agencies believed that the journalists would leave and the paper would no longer be published, but they got it wrong. The newspaper has become tougher and more topical and its circulation has grown. It has come under attack from all sides: our co-founder was subjected to intimidation and was forced to leave Russia. In February 2018, there was an attempt to confiscate the entire print run from retailers and in early May supermarkets selling the paper also came under pressure. Even when the last print run of only 2,000 copies came out, members of the FSB, the federal security service, went around the city seizing them. The last issue came out on 4 April 2018. It was published under tough circumstances as we had no funding, our editor-in-chief was in prison and we worked on a voluntary basis. Every journalist became subject to criminal investigations for various reasons. Igor’s arrest and reprisals against the newspaper are different pieces of the same picture.

Igor is a restless and caring person. He is very energetic and has incredible will power. These qualities helped him put together such a remarkable team. As a matter of fact, everyone at the newspaper did what they loved most, what they were good at and interested in. Novye Kolyosa is Igor Rudnikov’s cherished child. He personally selected the jokes for the back page humour section. There are not many editors-in-chief in the world who carefully select each photograph for the publication themselves. Igor has a remarkable photo archive and each page of the newspaper was a masterpiece in itself. has Amongst his collection is an excellent collection of old photographs of pre-war Königsberg and for 23 years he wrote about people who once lived in the city and walked its streets. He brings back the history of Königsberg, now Kaliningrad, to people who live here.

It is interesting to note that Igor was not born in Kaliningrad but in Ukraine, the son of a military pilot. This city is not his birthplace but it has become his home. He has great nostalgia for the old city that once existed here and even for the ruin that it became after the bombings of World War II. After the war, the city was virtually built from scratch.

Kaliningrad’s visitors who wish to see the old Königsberg must take a stroll to Kneiphof Island, also known as Kant Island. This is the resting place of the great philosopher Immanuel Kant, who is buried in the “sepulchre of professors” at the City Cathedral — one of the few buildings remaining from the old city. Incidentally, Kant Island lies next to the island where World Cup matches will be held.

Also, you can come and admire the building at 17 Chernyakhovsky Street where our newpaper’s editorial office was based. It was built in the early 20th century and was used to accommodate the officers of the Cuirassier Regiment — the oldest in East Prussia. Igor spent considerable time fighting for the building to be granted the status of architectural monument and invested a lot of money into the restoration of the plasterwork. Even a gas lamp was installed outside the entrance. Despite the troubled times the sign with the name of the paper Novye Kolyosa is still on the building.