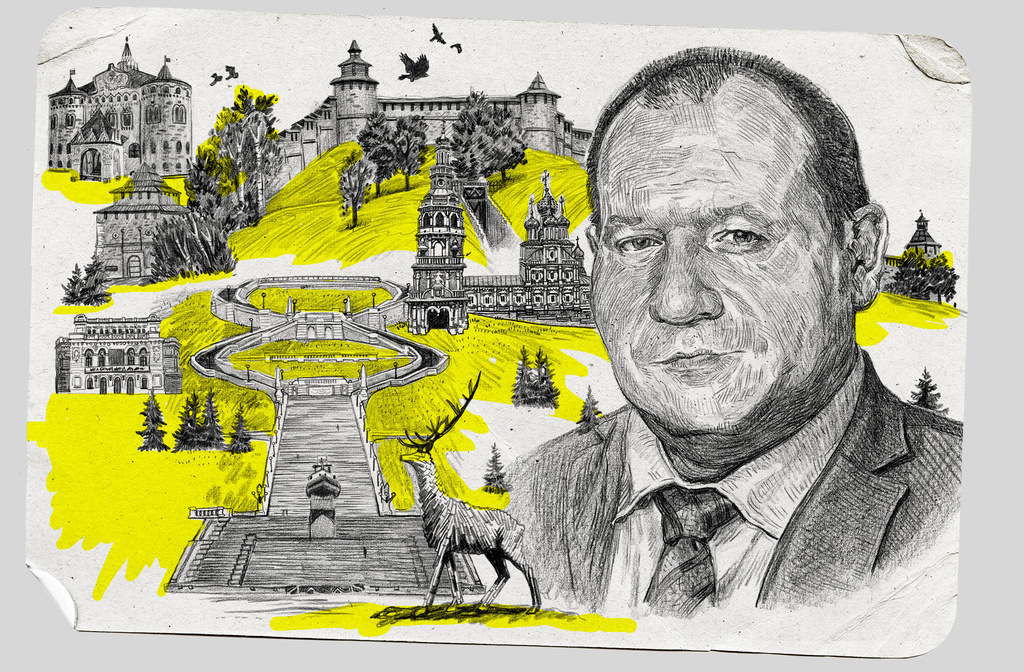 Igor Kalyapin, director of the Committee against Torture (Nizhny Novgorod)

Igor began his human rights activism in the early 1990s. The authorities fabricated an embezzlement case against him. After his arrest, he was taken to the police station where police officers beat him every day.

I have been living in Nizhny Novgorod all my life. My favourite place here is Schelokovsky Khutor — a forest park on the city outskirts. The most important events and thoughts in my life are related to this park, its rivers and its lakes. My father taught me cross-country skiing there. As a kid, I used to watch moose wondering in that forest. I still go there for walks.

Once a year, I go to the northern Nizhny Novgorod Region. I spend a couple of weeks at my small cottage, walking in the woods and hunting black grouse. While I walk, I try to avoid thinking about my work and block the memories of the torture that has been going on in Nizhny Novgorod, and in Orenburg, and in Moscow, and in many other Russian cities.

I began my human rights activism in the early 1990s, soon after I met Boris Nemtsov, a Russian opposition leader and the governor of Nizhny Novgorod region who was killed in 2015. Human rights activism was not my highest priority back then. Probably, it was not even my second or third priority — just something in the background. I was an entrepreneur, and I strongly believed that the free market and competition would become drivers for the development of democracy, and civil society in Russia. However, the reality turned out to be different. Many businesses that emerged after the collapse of the Soviet Union suffered from racketeering, as well as harassment by officials and the police. One day, the authorities fabricated an embezzlement case against me.

After my arrest, I was taken to the police station where police officers beat me every day. Then they took me to the pre-trial detention centre, but because of the serious injuries I sustained after being tortured, the prison administration at first refused to check me in: they thought I would not live until morning, and they did not want to be blamed for that. Over the three months I spent at the pre-trial detention centre, I lived in the most appalling conditions: overcrowded cells, lack of light and air, and hordes of bed bugs and lice —conditions that are torturous in themselves. But eventually I got very, very lucky. The real perpetrators of the crime I was accused of were caught, and I was released. I had escaped 10 further years in prison.

After being released from prison, I reconsidered many things in my life. I realized that no matter what success I achieved in my business, what luxury cars I drove or expensive suits I wore, I could be unfairly prosecuted at any moment — even though I was innocent and the criminal charges could be unrelated to my activities. But being prosecuted is not the most terrible thing. While in detention, I understood that, with enough pressure, anyone can be forced to “confess” to any crime, including murder. That is why I decided to commit myself to defending human rights with a focus on stopping torture.

In 2000, several human rights defenders and I founded the Committee against Torture, or CAT, in Nizhny Novgorod. Over the last 18 years, our organization has achieved considerable results: we have had more than 900 unlawful decisions overturned, documented 173 cases of torture, and secured 136 convictions for the perpetrators. But most importantly, we made the authorities admit there was a real problem that needed to be addressed.

It means a great deal to me that people are getting less and less afraid of filing complaints with the courts, and seeking justice and reparations through legal channels. I cannot say that we were the only ones who changed the public attitude, but I hope that we contributed to it.

Strange as it may seem, the best compliment our organization has ever received came from a senior military official. One day, a police officer approached this military official asking for his protection, as the former was about to be arrested for being complicit in torture. He asked him to sort out “the issue with the Committee Against Torture”. The military official listened to the frightened policeman and said, “I’m afraid I won’t be able to help. You can do nothing about this CAT. There’s no way you can approach them. And they don’t take bribes either”. The conversation was retold to me by the military official’s colleague who had witnessed it. This is indeed the case. When I hire lawyers, I always tell them that no one will ever make them act against their conscience and come to conclusions they disagree with.

As a human rights organization, we carry out a social mission. Our role can sometimes be different to that of a traditional lawyer. A lawyer’s main goal is to clear a client of all charges, or if this isn’t possible reduce them to the minimum. Our goal is to seek justice and reparation for victims of torture and other human rights violations, and hold to account those responsible. In some cases, when police officers realize they will be prosecuted, they offer the victim a kind of a “deal” where he withdraws his statement in exchange for a term reduction. Some victims refuse such “cooperation”, others do not. When we are faced with these situations we always try to speak to the victims we defend and explain that it allows the perpetrators to avoid justice and entrenches impunity.

I wait for the day when important social and political decisions made at the government level, for example in relation to the appointment of senior officials, were discussed with civil society representatives. Usually, only MPs are consulted while civil society representatives are considered as opposition, and their opinions are ignored. Yet, our independent work is essential so that society moves in the right direction, with people having their voices heard and justice accessible for all.