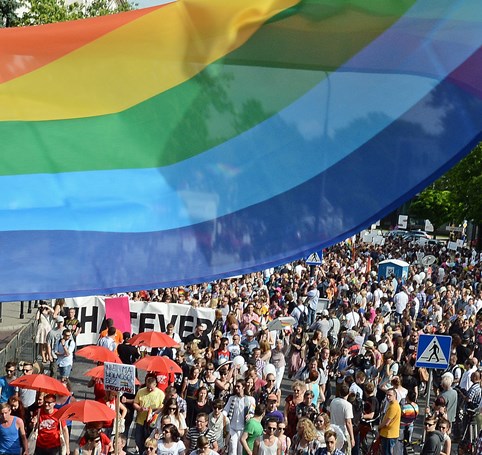 Discrimination, homophobia and Russia’s crusade against non-traditional sexual relationships have helped fuel a worrying rise in hostility towards LGBTI human rights groups in parts of the former Soviet Union said Amnesty International, in a new report today. ‘Less equal: LGBTI human rights defenders in Armenia, Belarus, Kazakhstan, and Kyrgyzstan’ explores the increasingly discriminatory environment that LGBTI rights groups in four former Soviet states have faced in recent years, including within the human rights community itself. In all four countries attitudes have hardened against LGBTI people, in part as a consequence of the repressive rhetoric and practices emanating from Moscow.

“LGBTI activists have long faced discrimination, including among other human rights groups. Now the extent of Russian influence and the reach of its media has played a significant role in further worsening the situation for LGBTI groups in the region. Their all-out assault on LGBTI rights has emboldened other governments to pursue similarly repressive policies and exacerbated negative public attitudes in these countries, including among the ‘mainstream’ human rights groups. The idea, promoted by Russia, that LGBTI rights are ‘western values’ that somehow constitute a threat to national security is becoming entrenched elsewhere. It’s a climate of ignorance and hate that’s being fostered by national governments and is even infecting the human rights community in the region,” said Colm O’Gorman, Executive Director of Amnesty International Ireland.

The governments of Armenia, Belarus, Kazakhstan and Kyrgyzstan, Russia’s closest partners in the region, have all embarked on a crackdown on LGBTI rights in recent years. All four countries have attempted to introduce homophobic “propaganda” laws, similar to the law in Russia. So far, only Belarus has done so, adopting a variation of the Russian law in 2016.

A prominent LGBTI activist in Belarus told Amnesty International he could no longer continue with his work as “the personal risks were too great.” He had lost several jobs because of his activism and faced repeated police questioning. Notably, the majority of Amnesty’s interviewees in all four countries wished to remain anonymous due to the security concerns or other possible ramifications.

Elsewhere, Armenia and Kyrgyzstan amended their Constitutions to explicitly preclude same-sex marriages in 2015 and 2016 respectively. LGBTI groups in each of the former Soviet Republics have faced a raft of repressive government tactics to silence their voices. With few exceptions, gay pride marches are consistently forbidden or become targets of attacks by homophobic groups, with the police often failing to prevent and investigate effectively hate crimes.

Freedom of association is limited for all LGBTI activists, and while in Armenia and Kyrgyzstan a small number of NGOs that work on LGBTI rights are registered, only activists and informal groups are active in Belarus and Kazakhstan.

As a result of this discrimination, LGBTI human rights defenders and activists have even come to feel “less equal” within their local human rights communities, which are dominated by “mainstream” human rights groups, who do not primarily work on LGBTI rights.

“LGBTI activists not only bear the social stigma of being marginalised and ostracised by society, they are also treated as second-class rights defenders within their human rights communities,” said Colm O’Gorman.

Kyrgyzstan activists told Amnesty International that “no one wants to be associated with us”. Following a homophobic attack on an LGBTI event in May 2015, just one prominent Kyrgyzstani human rights organisation condemned the assault. For LGBTI groups in each country, the lack of support from the broader human rights community is the biggest source of demoralisation and frustration.

Mikayel Danielyan, former Head of the Helsinki Association, who sadly died of a heart attack in August 2016 was one of the earliest advocates for LGBTI rights in Armenia. Prior to his death he recalled that some parliamentarians and other human rights defenders refused to sit at the same table with him during public events.

“State authorities in Armenia, Belarus, Kazakhstan and Kyrgyzstan must ensure that LGBTI groups can carry out their human rights work in safety and without any discrimination. Amnesty International calls on human rights groups across the region to work alongside LGBTI rights organisations, united by the principle of the universality of human rights,” said Colm O’Gorman.