Gruesome evidence of ethnic cleansing in northern Iraq as Islamic State moves to wipe out minorities.

Fresh evidence uncovered by Amnesty International indicates that members of the armed group calling itself the Islamic State (IS) have launched a systematic campaign of ethnic cleansing in northern Iraq, carrying out war crimes, including mass summary killings and abductions, against ethnic and religious minorities.

A new briefing, Ethnic cleansing on historic scale: the Islamic State’s systematic targeting of minorities in northern Iraq, published today presents a series of hair-raising accounts from survivors of massacres who describe how dozens of men and boys in the Sinjar region of northern Iraq were rounded up by Islamic State fighters, bundled into pick-up trucks and taken to village outskirts to be massacred in groups or shot individually.

Hundreds, possibly thousands, of women and children, along with scores of men, from the Yezidi minority have also been abducted since the Islamic State took control of the area.

“The massacres and abductions being carried out by the Islamic State provide harrowing new evidence that a wave of ethnic cleansing against minorities is sweeping across northern Iraq,” said Donatella Rovera, Amnesty International’s Senior Crisis Response Adviser currently in northern Iraq.

“The Islamic State is carrying out despicable crimes and has transformed rural areas of Sinjar into blood-soaked killing fields in its brutal campaign to obliterate all trace of non- Arabs and non-Sunni Muslims.”

Two of the deadliest incidents took place when IS fighters raided the villages of Qiniyeh on 3 August and Kocho on 15 August. The number of those killed in these villages alone runs into the hundreds. Groups of men and boys including children as young as 12 from both villages were seized by IS militants, taken away and shot.

“There was no order, they [the IS fighters] just filled up vehicles indiscriminately,” one survivor of the massacre in Kocho told Amnesty International.

Said, who also narrowly escaped death with his brother, Khaled, was shot five times; three times in his left knee and once in the hip and shoulder. They lost seven brothers in the massacre. Another survivor, Salem, who managed to hide and survive near the massacre site for 12 days described to Amnesty International the horror of hearing others who had been injured cry out in pain. 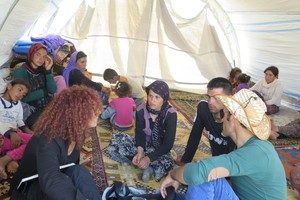 “Some could not move and could not save themselves; they lay there in agony waiting to die. They died a horrible death. I managed to drag myself away and was saved by a Muslim neighbour; he risked his life to save me; he is more than a brother to me. For 12 days he brought me food and water every night. I could not walk and had no hope of getting away and it was becoming increasingly dangerous for him to continue to keep me there,” he said.

He was later able to escape by donkey and rode to the mountains and then on into the areas controlled by the Kurdistan Regional Government (KRG).

The mass killings and abductions have succeeded in terrorizing the entire population in northern Iraq leading thousands to flee in fear for their lives.

The fate of most of the hundreds of Yezidis abducted and held captive by the Islamic State remains unknown. Many of those held by IS have been threatened with rape or sexual assault or pressured to convert to Islam. In some cases entire families have been abducted.

One man who gave Amnesty International a list of 45 names of missing relatives – all of whom are women and children said: “We get news from some of them but others are missing and we don’t know if they are alive or dead or what has happened to them.”

“The people of northern Iraq deserve to live free from persecution without fearing for their lives at every turn. Those ordering, carrying out, or assisting in these war crimes must be apprehended and brought to justice,” said Colm O’Gorman, Executive Director of Amnesty International Ireland.

“Instead of aggravating the fighting by either turning a blind eye to sectarian militias or arming Shi’a militias against the Islamic State as the authorities have done so far, Iraq’s government should focus on protecting all civilians regardless of their ethnicity or religion.”

Since taking control of Mosul on 10 June, IS militants have also systematically destroyed and damaged places of worship of non-Sunni Muslim communities including Shi’a mosques and shrines.

Among the ethnic and religious minorities being targeted in northern Iraq are: Assyrian Christians, Turkmen Shi’a, Shabak Shi’a, members of the Yezidi faith, Kakai and Sabean Mandaeans. Many Arabs and Sunni Muslims known or believed to oppose IS have also been targeted in apparent reprisal attacks.