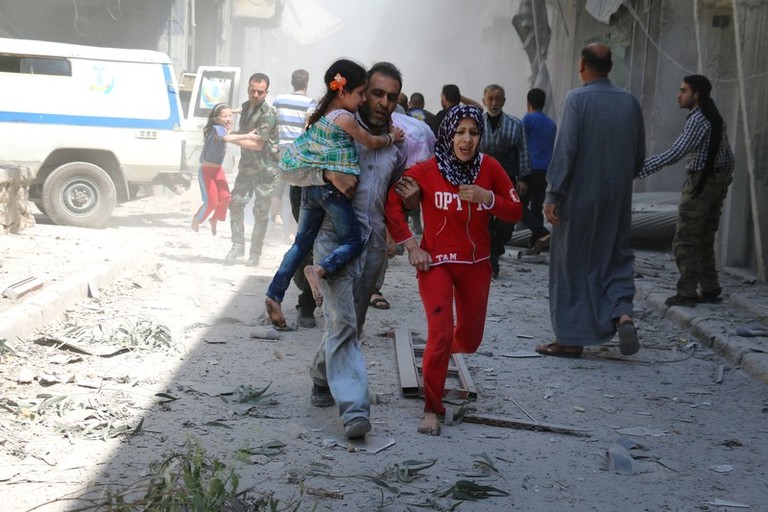 The greatest challenge facing the UN’s next leader: the Security Council veto

Opening his last General Assembly debate on 20 September, UN Secretary General Ban Ki-moon bemoaned the blocking of essential action in the Security Council that has marred his time in office: “Is it fair for any one country to wield such disproportionate power, and hold the world hostage on so many important issues?” he said.

This will be a major challenge waiting for Ban’s newly-appointed successor, Antonio Guterres, will be judged, among other things, on his ability to stand up to human rights violations committed by, or tacitly accepted by, the major powers. He faces an immediate need to confront a UN Security Council that has for too long failed to deal with major conflicts, even when states or armed groups commit horrific crimes against civilians.

The Security Council’s impotence has been most exposed in Syria. War crimes are becoming routine, with even hospitals and UN aid convoys now treated as targets. In Aleppo, relentless bombing is causing bloodshed and human suffering on a mass scale.

Why is the world standing by while Aleppo burns?

From the very start of this conflict over five years ago, Russia and China have vetoed or blocked any Security Council action that could bring relief to Syria’s civilians or bring perpetrators of abuses in Syria to account. China and Russia only actually wielded the veto on Syria four times (out of eight total vetoes this decade), but its threat alone now has the power to deter states from drafting thorny resolutions. The Security Council is now hostage to a “silent veto”. This year there have been no vetoes because of this self-censorship.

The Security Council has been reduced to a dysfunctional instrument of political posturing between Russia, the USA and their respective allies. Last week’s emergency meeting on Syria descended into scenes reminiscent of the Cold War with ambassadors of France, the UK and USA walking out of a session when the Syrian ambassador started speaking. Even with UN Special Envoy for Syria Staffan de Mistura warning that Aleppo may be completely destroyed by the end of the year, negotiations around France’s new draft resolution are overshadowed by the “silent veto”.

As it became clear that Russia’s veto power meant that action on Syria was still unlikely, UN High Commissioner for Human Rights Zeid Ra’ad Al Hussein, said that horrific scenes from Aleppo required proposals to limit the use of the veto. The people of Aleppo, indeed all of us, deserve better.

Russia and China are not the only abusers of the veto system. After Russia, the USA has used its veto power the most, most recently in 2011 to block a resolution condemning continued settlement activity by Israel in the Occupied Palestinian Territories. The USA’s “silent veto” made futile any hopes of passing a resolution during the 2014 conflict in Gaza in which more than 2,000 Palestinians, most of them civilians, died. UK and US support for Saudi Arabia-led military coalition in Yemen also makes Security Council action on that conflict unlikely.

And last month, Amnesty International released evidence that Sudanese government forces used chemical weapons to kill and maim hundreds of civilians, including children, in Darfur scores of times in 2016. We are calling for a special session of the Security Council to address this urgently.

But with the “silent veto” all powerful, that is unlikely to happen.

The paralysis is enabling ever more brutal and unlawful conflict. In the last two years we have seen more chemical attacks by states in war zones like Sudan and Syria than at any stage in the quarter-century since the Gulf War.

The deadlock at the UN is now so bad that reforming the veto alone is no longer enough. We need an end to the self-censorship where urgent issues never even get to a vote, let alone a Security Council resolution.

That said, the deadlock will continue until the five permanent Security Council members renounce their veto rights in situations of genocide and other mass atrocities. This would give the UN more scope to take action to protect civilians when lives are at grave risk and send a powerful signal to perpetrators that the world will not sit idly by while mass atrocities take place. Without the veto it would be impossible to block UN action over the violence in Syria. “Never again” would mean just that.

Two initiatives to restrain use of the veto are gathering momentum. One, led by France and Mexico, is supported by 99 states so far. The other, led by Liechtenstein on behalf of a group of 27 mainly small countries, has been adopted by 112 states, including two permanent Security Council members, France and the UK.

While the success of these initiatives depends on China, Russia and the USA voluntarily restraining their use of the veto, the best chance of that happening is if other states put sustained international pressure on them to stop putting national interests ahead of protecting human rights, and human lives.

The arrival of a new UN leader ready to challenge powerful member states from day one could add important momentum to the campaign for reform.

The UN Secretary-General has the potential to wield great moral authority on the world stage. He could use it to bring major pressure to bear on recalcitrant states who commit, or block action to stop, abuses.

Guterres must use the Secretary-General’s prerogative to put vital issues before the Security Council. As a former UN High Commissioner for Refugees, Guterres knows the importance of reacting to a humanitarian crisis fast, even if it means grasping a political nettle. Too often world leaders have disregarded clear signs of looming disaster leading preventable loss of life.

He can also keep human rights and humanitarian principles front and centre in the debate, rather than sacrificial lambs on the altar of realpolitik.

If Guterres is ready to shine a powerful spotlight on the most divisive problems facing the international community, there may yet be hope for the UN, and the people of Aleppo.