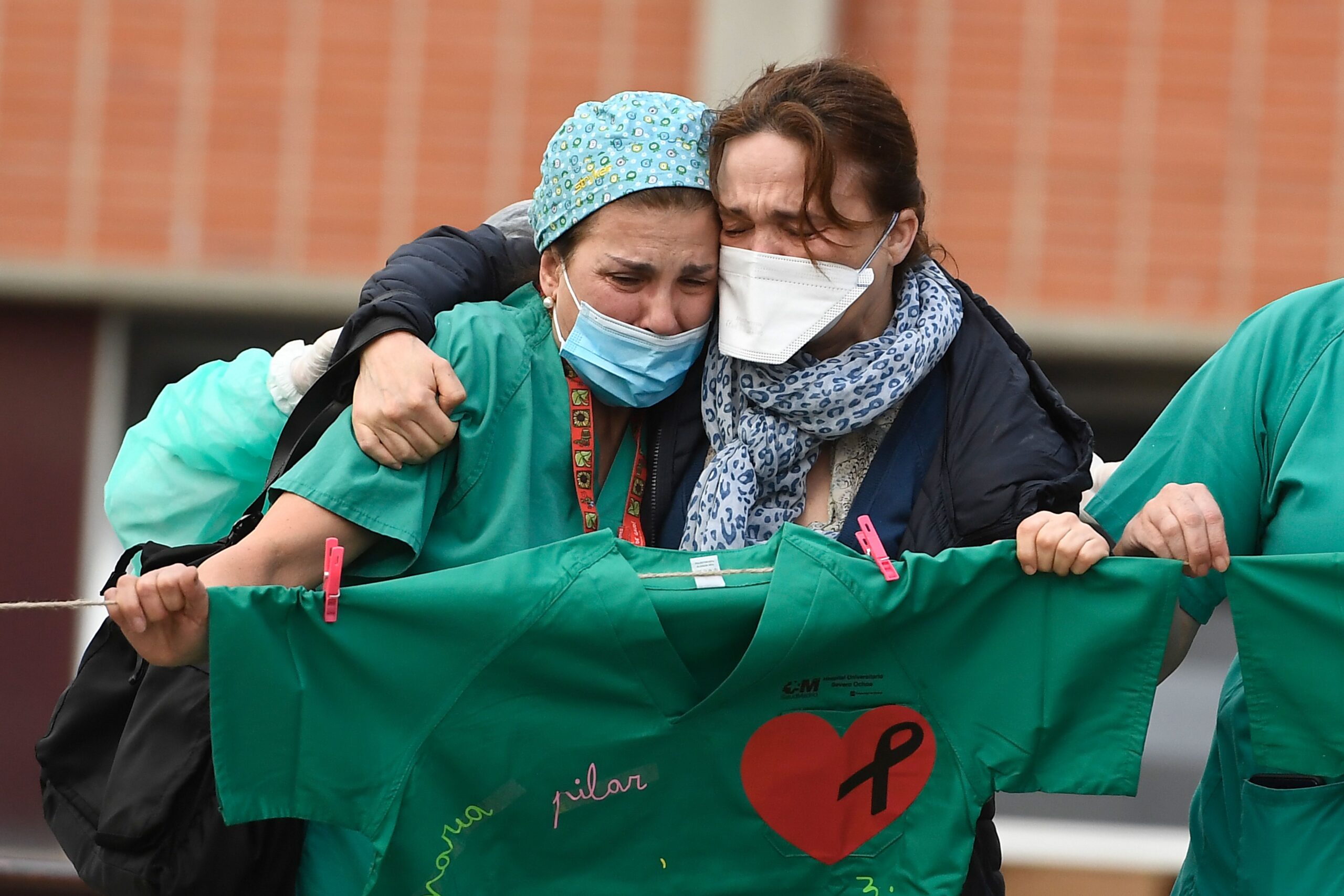 Governments must be held accountable for the deaths of health and essential workers who they have failed to protect from COVID-19, Amnesty International said today, as it released a new report documenting the experiences of health workers around the world. The organisation’s analysis of available data has revealed that more than 3000 health workers are known to have died from COVID-19 worldwide – a figure which is likely to be a significant underestimate.

Alarmingly, Amnesty International documented cases where health workers who raise safety concerns in the context of the COVID-19 response have faced retaliation, ranging from arrest and detention to threats and dismissal.

“With the COVID-19 pandemic still accelerating around the world, we are urging governments to start taking health and essential workers’ lives seriously. Countries yet to see the worst of the pandemic must not repeat the mistakes of governments whose failure to protect workers’ rights has had devastating consequences,” said Colm O’Gorman, Executive Director of Amnesty International Ireland.

“It is especially disturbing to see that some governments are punishing workers who voice their concerns about working conditions that may threaten their lives. Health workers on the frontline are the first to know if government policy is not working, and authorities who silence them cannot seriously claim to be prioritising public health.”

Thousands have lost their lives

There is currently no systematic global tracking of how many health and essential workers have died after contracting COVID-19.

However, Amnesty International has collated and analysed a wide range of available data that shows that over 3000 health workers are known to have died after contracting COVID-19 in 79 countries around the world.

The overall figure is likely to be a significant underestimate due to under-reporting, while accurate comparisons across countries are difficult due to differences in counting. For example, France has collected data from just some of its hospitals and health centres, while figures of deceased health workers provided by health associations in Egypt and Russia have been contested by their governments.

Health workers reported serious shortages of personal protective equipment (PPE) in nearly all of the 63 countries and territories surveyed by Amnesty International.

This includes countries which may yet see the worst of the pandemic, such as India and Brazil and several countries across Africa. A doctor working in Mexico City told Amnesty International that doctors were spending about 12% of their monthly salaries buying their own PPE.

In addition to a global shortage of supply, trade restrictions may have aggravated this problem. In June 2020, 56 countries and two trade blocs (the European Union and the Eurasian Economic Union) had put in place measures to either ban or restrict the export of some, or all, forms of PPE or its components.

“While states must ensure there is sufficient PPE for workers within their territories, trade restrictions risk exacerbating shortages in countries that are dependent on imports,” said Colm O’Gorman.

“The COVID-19 pandemic is a global problem that requires global cooperation.”

In at least 31 of the countries surveyed by Amnesty International, researchers recorded reports of strikes, threatened strikes, or protests, by health and essential workers as a result of unsafe working conditions. In many countries, such actions were met with reprisals from authorities.

In Egypt, for example, Amnesty documented the cases of nine health care workers who were arbitrarily detained between March and June on vague and overly broad charges of “spreading false news” and “terrorism”. All those detained had expressed safety concerns or criticized the government’s handling of the pandemic.

Another Egyptian doctor told Amnesty International that doctors who speak out are subjected to threats, interrogations by the National Security Agency (NSA), administrative questioning, and penalties. He said:

“Many [doctors] are preferring to pay for their own personal equipment to avoid this exhausting back and forth. [The authorities] are forcing doctors to choose between death and jail.”

In some cases, strike action and protests have been met with heavy-handed responses.

In Malaysia for example, police dispersed a peaceful picket against a hospital cleaning services company. The picketers’ complaints centred around what they said was the unfair treatment of union members by the company as well as a lack of sufficient protection for hospital cleaners. Police arrested, detained and charged five health care workers who were protesting for “unauthorized gathering” in violation of their rights to freedom of association and assembly.

“Health and essential workers have a right to raise their voices against unfair treatment,” said Colm O’Gorman.

There have also been reports in several countries of health and essential workers being fired or facing disciplinary action for speaking out about their concerns.

In the USA for example, certified nursing assistant Tainika Somerville was fired after posting a video on Facebook where she read out a petition calling for more PPE. Tainika says staff at the nursing home in Illinois where she works were not informed that they were working with COVID-19 patients and found out through the media.  The nursing home had reported 34 infections and 15 COVID-19 related deaths as of May 29.

In Russia, Amnesty International highlighted the cases of two doctors, Yulia Volkova and Tatyana Reva, who are facing retaliation after complaining about a lack of PPE. Yulia Volkova has been charged under Russia’s fake news laws and faces a fine of up to RUB 100,000 (USD 1,443), while Tatyana Reva is facing disciplinary proceedings that may result in her dismissal.

Unfair pay and lack of benefits

In addition to unsafe working conditions, Amnesty International has documented how some health and essential workers are being unfairly paid or in some cases not paid at all.

In South Sudan for example, doctors on the government’s payroll have not received their salaries since February and do not receive welfare packages or medical cover. In Guatemala, at least 46 facilities staff were not paid for the two-and-a-half months they spent working at a COVID-19 hospital.

In some countries, there are no additional benefits for health and essential workers in the context of the Covid-19 pandemic, and in other countries benefits exclude certain categories of workers.

Amnesty International is calling on states to consider COVID-19 an occupational illness.

As part of this they must ensure that health and essential workers have access to compensation and other support in case they contract the infection. They must also be included in priority groups for COVID-19 testing.

Amnesty International documented several cases where health and essential workers experienced stigma and violence because of their jobs. For example, a nurse in Mexico was reportedly drenched with chlorine while walking on the street, and in the Philippines, attackers poured bleach in the face of a hospital utility worker.

These incidents point to a climate of misinformation and stigma and underscore the importance of governments providing accurate and accessible information on the spread of COVID-19.

In Pakistan, Amnesty International has recorded several instances of violence against health workers since April. Hospitals have been vandalized, doctors have been attacked, and one was even shot by a member of the Counter Terrorism Force.

There have been several statements from ministers in Pakistan claiming that hospitals have the necessary resources, despite reports that hospitals have been forced to turn away even critical patients, due to the shortage of beds, ventilators and other life-saving equipment. This puts health workers in danger as people don’t believe them when they say they do not have room for more patients.

“We call on all states affected by COVID-19 to carry out independent public reviews into their preparedness for and responses to the pandemic, with a view to better protecting human rights and lives in the event of a future mass disease outbreak,” said Colm O’Gorman.

This should include a review into whether the rights of health and essential workers – including the right to just and favourable conditions of work, and the right to freedom of expression – were adequately protected.

States must ensure adequate compensation for all health and essential workers who have contracted COVID-19 as a result of work-related activities. They must also investigate cases where workers have faced reprisals for raising health and safety concerns, and provide effective remedy to those who have been unjustly treated including by reinstating workers who have lost their jobs for speaking out.

For the purpose of this briefing, “health workers” refers to everyone involved in the delivery of health and social care in any capacity, including but not limited to doctors, nurses, social care workers, cleaners, ambulance drivers and facilities staff. While the briefing largely focuses on health workers, given available information, the same issues apply to a broader range of ‘essential workers’ who have been exposed to COVID-19 in a range of frontline jobs during the pandemic.