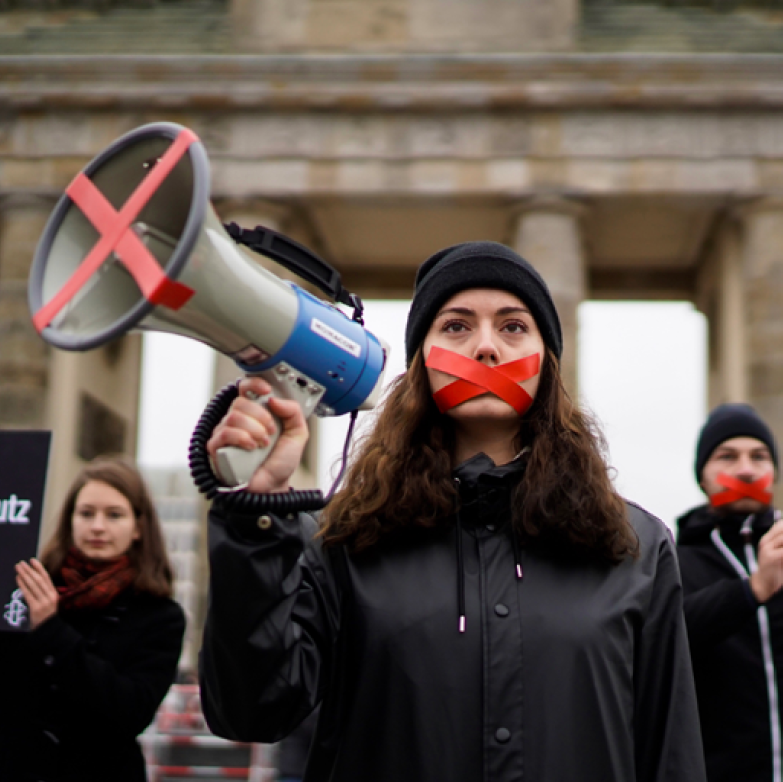 Governments across the world are increasingly attacking non-governmental organisations (NGOs) by creating laws that subject them and their staff to surveillance, nightmarish bureaucratic hurdles and the ever-present threat of imprisonment, Amnesty International said in a new report released today.

Laws Designed to Silence: The Global Crackdown on Civil Society Organisations reveals the startling number of countries that are using bullying techniques and repressive regulations to prevent NGOs from doing their vital work. The report lists 50 countries worldwide where anti-NGO laws have been implemented or are in the pipeline.

“We documented how an increasing number of governments are placing unreasonable restrictions and barriers on NGOs, preventing them from carrying out crucial work,” said Kumi Naidoo, Secretary General of Amnesty International.

“In many countries, organisations who dare to speak out for human rights are being bullied into silence. Groups of people who come together to defend and demand human rights are facing growing barriers to working freely and safely. Silencing them and preventing their work has consequences for everyone.”

In the past two years alone, almost 40 pieces of legislation that interfere with the right to association and are designed to hamper the work of civil society organisations have been put in place or are in the works around the world. These laws commonly include implementing ludicrous registration processes for organisations, monitoring their work, restricting their sources of resources and, in many cases, shutting them down if they don’t adhere to the unreasonable requirements imposed on them.

Regrettably, Ireland is one of the countries identified in today’s report. The Electoral Act imposes a blanket ban on overseas donations to civil society groups deemed for “political purposes”, and places severe limits on domestic donations. “Political purposes” is so broadly defined in this Act that it can include the general advocacy work of a wide range of civil society organisations, in violation of their rights to freedom of association and expression.

The Standards in Public Office Commission has applied it to a number of civil society groups, often triggered by complaints. In 2017, Amnesty International Ireland was ordered by SIPO to return a grant it received from the Open Society Foundations to support its campaign to ensure abortion laws in Ireland comply with human rights, prior to the referendum campaign in 2018. In July 2018, SIPO agreed to the Irish High Court’s quashing that decision, recognising that it was procedurally flawed. However, the Act’s provisions remain a grave concern for civil society freedoms of expression and association.

“Even though the Electoral Act was not created to intentionally repress civil society, it has clearly been used against NGOs working on human rights issues. This undermines Ireland’s standing when holding other repressive governments to account,” said Colm O’Gorman, Executive Director of Amnesty International Ireland.

“The Electoral Act is completely at odds with Ireland’s foreign policy. Ireland has led on UN initiatives to defend the space for civil society globally. It has been a vocal critic of repression of civil society in countries like Russia, Hungary and Egypt.

We continue to urge the Government to amend this law to ensure it no longer obstructs the work of civil society groups, and violates civil society freedoms.”

In October 2018, Pakistan’s Ministry of the Interior rejected registration applications from 18 international NGOs, and dismissed their subsequent appeals, without giving a reason.

NGOs in Belarus are subjected to strict state supervision. Working for those NGOs whose registration request is rejected (often arbitrarily) is a criminal offence.

In Saudi Arabia, the government can deny licenses to new organisations and disband them if they are deemed to be “harming national unity”. This has affected human rights groups, including women’s human rights groups, who have not been able to register and operate freely in the country.

In Egypt, organisations that receive funding from abroad need to comply with stringent and arbitrary regulations. This has led many human rights defenders being banned from travel, having their assets frozen and prosecuted. Some could face up to 25 years in prison if convicted of receiving foreign funding.

“Amnesty International’s offices around the world have also come under attack. From India to Hungary, authorities have abused our staff, raided their offices and frozen their assets in a further escalation of their attack on local organisations,” said Kumi Naidoo.

Locked up for failing to comply

Many countries, such as Azerbaijan, China and Russia, have introduced further registration and reporting requirements for NGOs. Failure to comply means imprisonment, a punishment Azerbaijani human rights defender Rasul Jafarov, interviewed for the report, knows all too well.

“I was arrested in connection with activism and demonstrations carried out with my Human Rights Club,” said Rasul, who was released from prison in 2016, after being detained for over a year. “This created an awful atmosphere. Those not arrested or investigated had to close their organisations or stop their projects. Many left Azerbaijan to work abroad.”

This restrictive regulation means NGOs are under constant scrutiny by the authorities. In China, new legislation tightly controls the work of NGOs from registration and reporting to banking, hiring requirements and fundraising.

In Russia, the government has labelled NGOs who receive foreign funding “foreign agents” – a term synonymous with “spy”, “traitor” and “enemy of the state”. The government applies this legislation so broadly that even an organisation supporting people with diabetes was heavily fined, put on the “foreign agents” register and forced to close in October 2018. Medical, environmental and women’s groups have also come under fire.

The repressive policies of the Russian government have caused a ripple effect reaching several other countries.

In Hungary, a number of NGOs are being forced to label themselves as “foreign funded” as the government seeks to discredit their work and turn the general public against them. Organisations failing to comply with these rules face high fines and ultimately the suspension of their activities. Organisations working in support of migrants and refugees have been purposefully targeted and their staff harassed after a new set of laws were passed in June 2018.

“We don’t know what is going to happen to us and other organisations, and what laws will be passed next,” said Aron Demeter, from Amnesty International Hungary.

“Several members of our staff have been subjected to online trolling, abuse and threats of violence. Some venues refused to host our events and there were schools that refused to hold human rights education activities for fear of repercussions.”

In some countries, the attack on NGOs is particularly targeted against organisations that defend the rights of marginalized groups. Those promoting women’s rights, including sexual and reproductive health and rights, LGBTI rights, the rights of migrants and refugees and environmental groups are among the worst affected.

“No one should be criminalized for standing up for human rights. World leaders should be aiming to guarantee equality and ensure people in their countries have better working conditions, proper health care, access to education and adequate housing – not targeting those who demand them,” said Kumi Naidoo.

“Human rights defenders are committed to creating a better world for everyone. We’re not going to give up the fight, because we know how important this work is. World leaders reiterated their commitment to provide a safe environment for human rights defenders at the UN Headquarters in December 2018 during the 20th anniversary of the Declaration on HRDs. They must now ensure it becomes a reality.”

Restrictive laws are also seen in many other countries, even those regarded as more open to civil society such as the UK, Ireland, Australia and the USA. According to CIVICUS, a global alliance of civil society organisations and activists, Amnesty International’s report has come at a pivotal time.

“This report is timely given the proliferation of restrictions on the legitimate work of civil society organisations,” said Mandeep Tiwana, Chief Programmes Officer from CIVICUS. “By shining a spotlight on the challenges, those who support civil society and human rights values can help stem the tide.”

Laws Designed to Silence: The Global Crackdown on Civil Society Organisations is the third report in a series of publications from Amnesty International’s Brave campaign documenting the global crackdown on those who defend and promote human rights. Amnesty International’s Brave campaign aims to strengthen the recognition and protection of human rights defenders around the world.