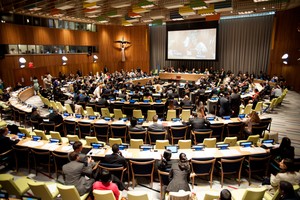 More than four years after the United Nations (UN) voted to adopt a landmark treaty to regulate the international arms trade, major arms exporters including the UK and France are effectively ignoring their treaty obligations by continuing to supply arms even where there is a real risk they could contribute to serious human rights violations, Amnesty International said today. Diplomats will meet in Geneva today for the start of the third Conference of States Parties to the Arms Trade Treaty (ATT). The ATT sets out prohibitions to stop the international transfer of arms when it is known they would be used for war crimes, or where there is an overriding risk that they could be used to commit or facilitate serious human rights violations.

“About half a million people are killed every year by firearms, and millions more are trapped in brutal conflicts fuelled by reckless arms sales. The Arms Trade Treaty promised to save countless lives by reigning in this massive, secretive industry, but at the moment weak implementation and a lack of transparency are threatening to undermine it. We are urging States Parties to double down on their commitments under the treaty, and to hold each other to account for reckless and potentially unlawful arms transfers. There is no time to waste – people around the world are being killed, maimed and terrorised by weapons which should never have been transferred in the first place,” said Colm O’Gorman, Executive Director of Amnesty International Ireland.

Under the ATT, exports of conventional weapons cannot take place if there is an overriding risk they could contribute to serious violations of international human rights or humanitarian law. Amnesty International has highlighted several examples where States Parties appear to have broken their obligations under the treaty. For example, many States Parties including France, the UK and Italy have supplied Egypt with a range of conventional weapons that could be used for internal repression including light arms and ammunition, despite the Egyptian government’s violent crackdown on dissent which has resulted in thousands of protesters being killed, tortured and injured.

According to the Stockholm International Peace Research Institute (SIPRI), from 2012-16, the period in which Egypt experienced an unprecedented crackdown, 80% of Egypt’s imports of major conventional weapons came from the US (a signatory to the ATT) or France. Several governments have also continued to lavish weapons on Saudi Arabia, despite overwhelming and credible evidence of serious violations of international humanitarian law in Yemen. Since the beginning of the conflict in 2015, during which time the Saudi Arabia-led coalition has bombed schools, hospitals and other civilian infrastructure, the UK has approved exports of licences worth over £3.7 billion to Saudi Arabia.

In May 2017, the US agreed $110 billion worth of potential arms sales to Saudi Arabia. The deals include $4.6 billion worth of guided air-to-ground munitions – a total of 104,000 bombs of the type that have been used routinely in the Yemen war. Recent deliveries in 2015-16 include 13,726 anti-tank missiles; 3,870 guided bombs; 60 combat helicopters and 1,279 armoured vehicles and 4 fighter ground attack aircraft.

According to SIPRI data, other significant suppliers of heavy weapons to Saudi Arabia since the start of the conflict in Yemen include France ($218 million); Spain ($196 million) and Switzerland ($186 million); Italy ($154 million); Canada ($115 million); and Turkey ($91 million).

Under the ATT, all States Parties are required to submit annual reports on their arms imports and exports – something that is vital to shed light on the international arms trade, which has long been shrouded in secrecy. As the ATT has no independent verification mechanism to ensure compliance with the rules regarding transfers, public annual reports on imports and exports are crucial for allowing parliaments, media and civil society to scrutinise the conduct of governments.

However, so far only 48 out of 75 States Parties have submitted an annual report on their 2016 arms imports and exports, and 13 governments, including Iceland and Nigeria, still have not even submitted a report for their 2015 arms exports and imports.

Many reports are also full of inconsistencies and gaps:

“One of the key aims of the ATT is to make the arms trade more transparent; yet states are still leaving out crucial information about who they are selling weapons to and how many, and what type of, arms they are importing. This is not just an administrative concern. The fact that some states are choosing to leave huge gaps, or simply not submit their reports at all, raises disturbing questions about what they are trying to hide. With transfers of major conventional weapons at their highest volume since the end of the Cold War, and weapons continuing to flow into conflict zones and countries rife with internal repression, States Parties need to  remember the purpose of this treaty: to reduce human suffering.  They must use this week’s meeting as an opportunity to ensure that all exporters and importers are held accountable to that aim,” said Colm O’Gorman.

After more than 20 years of campaigning by Amnesty International and partner NGOs in the Control Arms Coalition, the UN General Assembly voted decisively to adopt the Arms Trade Treaty (ATT) text in April 2013. The treaty entered into force on 24 December 2014.

The ATT is a global treaty that sets out, for the first time, prohibitions to stop the international transfer between states of weapons, munitions and related items when it is known they would be used to commit or facilitate genocide, crimes against humanity, or war crimes. States Parties must conduct an assessment of the ‘overriding’ risk that potential arms exports could contribute to serious violations of international human rights and humanitarian law.

130 states have now signed the treaty, with 92 of those having ratified it, including five out of the top ten arms exporters: France, Germany, Italy, Spain and the UK. However, major arms traders Russia and China have not yet joined the ATT. The US has signed but not ratified. By signing the ATT governments agree not to take any action that would undermine the treaty’s object and purpose.

See the full list of States Parties and signatories