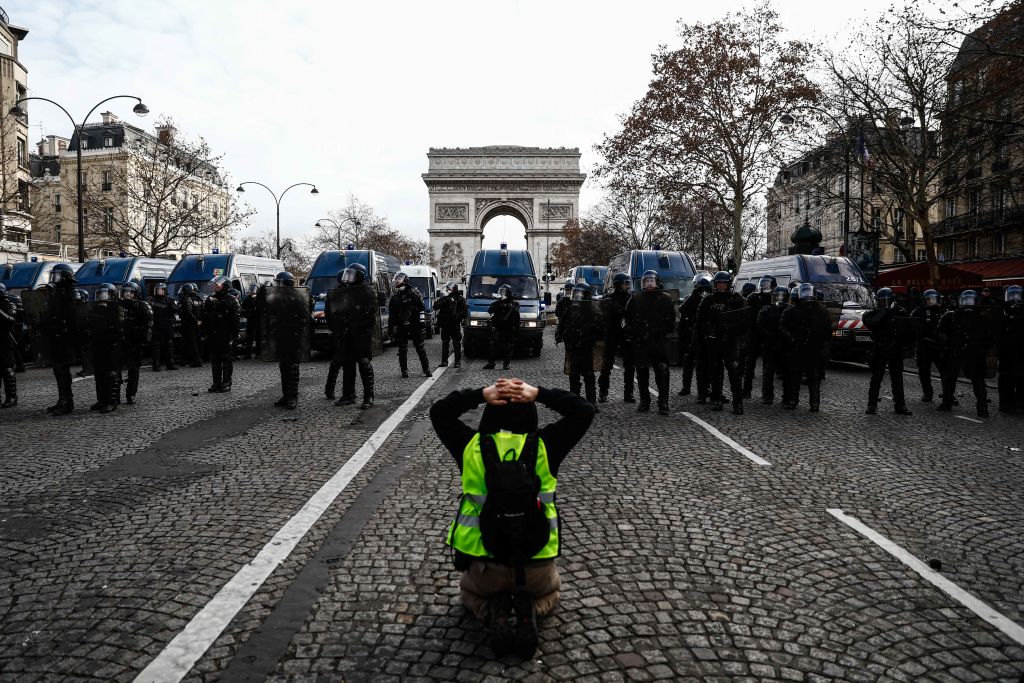 France: Police must end use of excessive force against protesters and high school children

French authorities must exercise restraint when policing demonstrations expected on Saturday and avoid any repetition of the injuries caused by their extremely heavy-handed response to protests by the “gilets jaunes” and high school movements, said Amnesty International.

Police used rubber bullets, sting-ball grenades and tear gas against largely peaceful protesters who did not threaten public order and the organisation has documented numerous instances of excessive use of force by police.

“Whilst policing demonstrations is a difficult task and some protesters have committed unlawful and violent acts, it is essential that both French law and international human rights law is respected. Police have a duty to maintain public order, and in doing so they may use force only when strictly necessary. If the use of force is unavoidable, it must be done with restraint.”

Official figures show that 1,407 protesters have been injured – 46 of them seriously – since protests began on 17 November. In total, 717 police officers, gendarmes and firefighters also suffered violence. Whilst the authorities, have repeatedly and legitimately condemned acts of violence by protesters, they have failed to express concern over the excessive use of force by the police which must be the subject of an independent, impartial and effective investigation.

Testimonies from victims and eyewitnesses and footage reviewed by Amnesty International show that police improperly used rubber bullets, shooting into crowds. They also launched using sting-ball grenades, which should never be used in public order situations.

During protests on 8 December in Paris, 225 protesters were injured according to official figures. One eyewitness, a street medic, Audrey, told Amnesty International that 10 of the 15 injured people treated by her team had been injured by rubber bullets. One of these cases involved an injury to the head.

As well as protesters, numerous journalists were injured; some claimed they were deliberately targeted. Footage examined by Amnesty International shows a journalist wearing a press helmet being hit with a sting-ball grenade in the back as he was walking away from the police line.

Photojournalist Thierry Olivier, told Amnesty International that he believed that “photographers were definitely targeted”. Another journalist, who asked not to be named, also described how he and his colleagues were “repeatedly shot at by police with rubber bullets.”

Another journalist, Thomas Morel-Fort, suffered multiple fractures to his hand after being shot by a rubber bullet despite wearing a helmet which had “press” written clearly on both sides.

In a deliberate tactic, the police appear to have set up barriers to search everyone heading to the demonstrations in order to confiscate protective equipment from protesters, journalists and even medics.

As well as having her own protective equipment confiscated. Audrey, the medic, told Amnesty International: “They confiscated my white protective helmet with a red cross on the side as well as the spare masks and goggles I carry for injured people.”

She described how she lost count of the number of people she treated for teargas. “The tear gas started at around ten o’clock in the morning and carried on almost continuously for four or five hours. There were people struggling to get away. One man who had inhaled too much teargas fell to his knees in spasms, shaking all over.”

The police also used anticipatory measures to search people who did not necessarily present an imminent risk of violence. Not only did people have their protective equipment confiscated, but in some cases it was used as a pretext for arrest.

On 8 December, nearly 400 people on their way to the protests were arrested in Paris after being searched at police barriers. These “preventive arrests” resulted from an order from the prosecutor allowing the police to conduct searches in certain areas. Many people who were carrying objects such as helmets, paint or masks were arrested for the offence of “participating in a group that intends to commit damage or violence”.

The following day, many were released from custody due to lack of sufficient evidence against them. Figures released by the Ministry of Interior show that, in total, 1,082 people were arrested on 8 December in Paris, including 100 children.

Excessive use of force against school children

As well as the “gilets jaunes” protests, a high school movement started on Monday 3 December initially to oppose a reform of the baccalaureat and the university admission procedures. Over the following week more than 200 high schools across France were blocked off by students.

Mathieu Barraquier, a teacher in Garges-lès-Gonesse, a Paris suburb, described escalating tensions on 5 December outside the Simone de Beauvoir high school, after a tree was set alight and police started putting on riot gear. Some children started throwing stones and in once instance, a small burning projectile in the direction of the police who were about 30 meters away. “Then, without any reason, I heard a rubber bullet and I saw a student collapse. I ran to him and as he turned his head I saw that his cheek was burst open like a split pomegranate. He had not been throwing stones. He had just been talking with his friends.” The boy was hospitalised for two days.

On 6 December, there were clashes between police and students of Saint-Exupery high school in Mantes-la-Jolie, another suburb of Paris. In all, 163 children, some as young as 13, were arrested, and footage of dozens of high school students forced to kneel with their hands either behind their heads or handcuffed behind their backs went viral.

According to Mourad Battikh, a lawyer representing several of the children, some were kept in this position for up to four hours. If confirmed, the act of keeping students in this position for such a long period amounts to cruel, inhuman or degrading treatment, which under international law is prohibited in all circumstances.

Another lawyer representing some of the children told Amnesty International that some of them were not given food or seen by a doctor before they were questioned. Their interviews with the police were not audio-visually recorded, as is required under French law. Other lawyers were prevented from attending the police interviews.

Leila Volle, who acted for two 15-year-old boys, told Amnesty International: “When I got to the police station the police officers told me that they had already begun questioning one of the minors. I told them: “This is not acceptable. He is a minor,” and asked for the interview to stop. They agreed but carried on questioning him without me present.”

Both boys were held for at least six hours. Leila Volle told Amnesty International that in the Versailles police station where her clients were taken, at least eight children were questioned without lawyers present.

“As thousands of people prepare to take to the streets tomorrow, the authorities must guarantee the safety and security of everyone and ensure that people can exercise their right to demonstrate peacefully. They should take lawful and proportionate measures to protect life and public order and must avoid excessive use of force,” said Rym Khadhraoui.

“The wearing of equipment to protect against tear gas, rubber bullets or sting-ball grenades does not amount to intention to commit violence, and those prosecuted simply on these grounds must be released.”