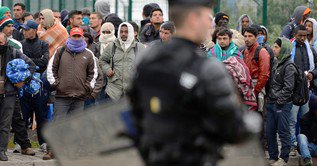 French authorities have harassed, intimidated and even violently assaulted people offering humanitarian aid and other support to migrants, asylum seekers and refugees in northern France in a deliberate attempt to curtail acts of solidarity, a new report by Amnesty International has found.

Targeting solidarity: Criminalization and harassment of people defending migrant and refugee rights in northern France reveals how people helping refugees and migrants in Calais and Grand-Synthe are targeted by the police and the court system.

“Migrants and refugees did not simply disappear with the demolition of the ‘Jungle’ camp in 2016 and more than a thousand men, women and children are still living precarious lives in the area. The role of human rights defenders who offer them support is crucial.”

Two-and-a-half years after the destruction of the so-called ‘Jungle’ camp, more than 1,200 refugees and migrants, including unaccompanied children, are living in tents and informal camps around Calais and Grande-Synthe. They have no regular access to food, water, sanitation, shelter or legal assistance and are subject to evictions, harassment, and violence at the hands of the police.

The number of camps and tents destroyed in Calais and Grande-Synthe increased last year, with 391 evictions carried out in the first five months of 2019 alone. Once evicted, migrants and refugees are at increased risk of violence and abuse. One local woman who provides migrants with help, told Amnesty International that she witnessed police spray migrants with teargas in the face while they were sleeping in her garden.

The increased number of evictions is a consequence of France’s “no attachment points” policy, which attempts to deter people from staying in the area by ensuring that camps are not set up. While authorities have put in place an outreach service to enable refugees and migrants access reception centres and asylum offices in France, these centres are a long way from Calais and Grande-Synthe and sometimes there is not enough capacity to accommodate them. In order to alleviate their suffering, human rights defenders have attempted to fill the gap and provide the essential support and services that the French state is failing to offer.

Instead of recognizing the importance of their work, authorities have obstructed, intimidated, harassed and in some cases started baseless prosecutions and even used violence.

A report last year by four organisations found that there had been 646 instances of police harassment and abuse against volunteers between November 2017 and June 2018. There have been 72 recorded instances this year, but the real figure is likely to be much higher.

Eleonore Vigny who took part in the Human Rights Observers project in Calais said that intimidation of volunteers had spiked last summer, with police employing new harassment techniques. “In April and May 2018 there were several body searches, especially of female volunteers, sometimes done by male officers. There was also an escalation in insults, and people have been pushed, sometimes to the ground…Recently we received more threats of legal suits, and threats of arrests.”

When reporting mistreatment of refugees, migrants, and human rights defenders, complainants say that they are not taken seriously. Charlotte Head, a volunteer who made several complaints about police behaviour to the police’s internal investigatory body, was warned that her complaints were “defamatory in character” and could constitute a “crime”.

One local human rights organization, Cabane Juridique, filed more than 60 complaints to different authorities and bodies between January 2016 and April 2019. In May 2019, the French Ministry of Justice told Amnesty International that regional courts had received just 11 complaints since 2016, and only one was being investigated by prosecutors.

Stress, anxiety and the fear of prosecution

Human rights defenders told Amnesty International that they feel the pressure on them is increasing and having a negative impact on all aspects of their lives. Some have experienced insomnia, stress and anxiety whilst others describe the impact of prosecutions as debilitating.

Loan Torondel who had been working in Calais told Amnesty International: “I feel that I am caught between the acute needs of people I am trying to help and the intimidation of French authorities who are trying to hamper humanitarian activities and label our activities as crimes. This is not a sustainable working environment for us, and it is the people we help who pay the consequences.”

One human rights defender told Amnesty International: “For the volunteers it’s very difficult. They are scared. We brief them on security and the context and they get scared. We struggle to recruit new volunteers.”

But despite the harassment, many of those interviewed by Amnesty International are determined to carry on with their vital work. One local volunteer told Amnesty International that she is thankful for the presence of the migrants and refugees: “They have made us more human, they have enriched our lives.”

“Rather than attempting to make the lives of migrants and refugees as difficult as possible, French authorities should take concrete measures to alleviate their suffering and provide shelter and support to all those living on the streets,” said Lisa Maracani.

“It is also time to defend the defenders. Rather than treating human rights defenders as the enemy, the authorities should see them as a vital ally, and celebrate acts of solidarity and compassion rather than criminalizing them.”

Human rights violations faced by human rights defenders must be viewed within the context of the treatment of the people whose rights they defend. It is essential that the rights of refugees and migrants are respected. This means improving the asylum and reception system in France, providing safe and legal routes to the UK and reforming the European asylum system to remove the requirement laid down in the Dublin rules that asylum-seekers seek protection in their first country of entry.