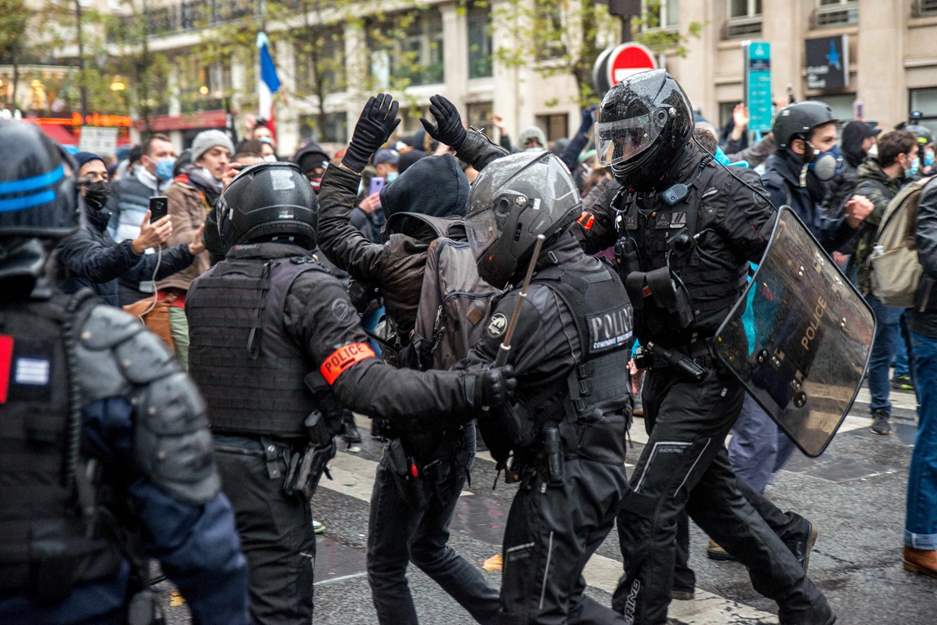 French authorities are using illegal tactics to crush protests and silence critics of the dangerous ‘Global Security Bill’ which will be voted on in the French Senate next month, Amnesty International said in a briefing today. The bill would restrict the ability of people to circulate images of police violence, and at the same time, extends the surveillance powers of police through the use of CCTV and drones.

“People protesting against the dangerous Global Security Bill have been arrested and detained on spurious grounds. The heavy-handed way in which French police have dealt with these protests only emphasizes why scrutiny over policing is so necessary. This bill could prevent journalists from reporting on police violence, an extremely dangerous precedent to set,” said Marco Perolini, Amnesty International’s Europe Researcher.

“Detaining people who are peacefully protesting against a law which would further trample over their rights is a move straight out of the ‘human rights violators’ playbook. These dangerous practices pose a grave threat to the rights of people in France.”

Tens of thousands of people including journalists, activists and others have taken to the streets in France since November 2020 to oppose the Global Security Bill as well as the Bill on Republic Values.

Protests organized on 12 December 2020 in several cities were attended by tens of thousands of protesters. On that day 142 people were arrested in Paris, 124 of whom were put in pre-charge detention. In nearly 80% of these cases, protesters were eventually not prosecuted.

Many of these protesters were arrested for non-violent crimes that are vaguely defined in French law; these include the crime of contempt against public officials, and participating in a group with a view to preparing violent acts.

Precisely because of the vague definition of these offences, there are insufficient grounds to justify many of the arrests and pre-charge detentions. Amnesty International has raised similar concerns regarding arbitrary arrests related to the ‘Gilets Jaunes’ (Yellow Vests) protests against pension reforms which started in 2018, as well as protests following the COVID-19 lockdown in 2020.

Despite authorities encouraging people to take measures to prevent the spread of COVID-19, wearing face masks during a public assembly was cited amongst the grounds for arrest.

“Amnesty International is calling on President Emmanuel Macron to ensure that all laws that violate the right to peaceful assembly are scrapped. People peacefully participating in protests ahead of the debate at the Senate on 3 March must be allowed to do so without the threat of arrest hanging over them.”