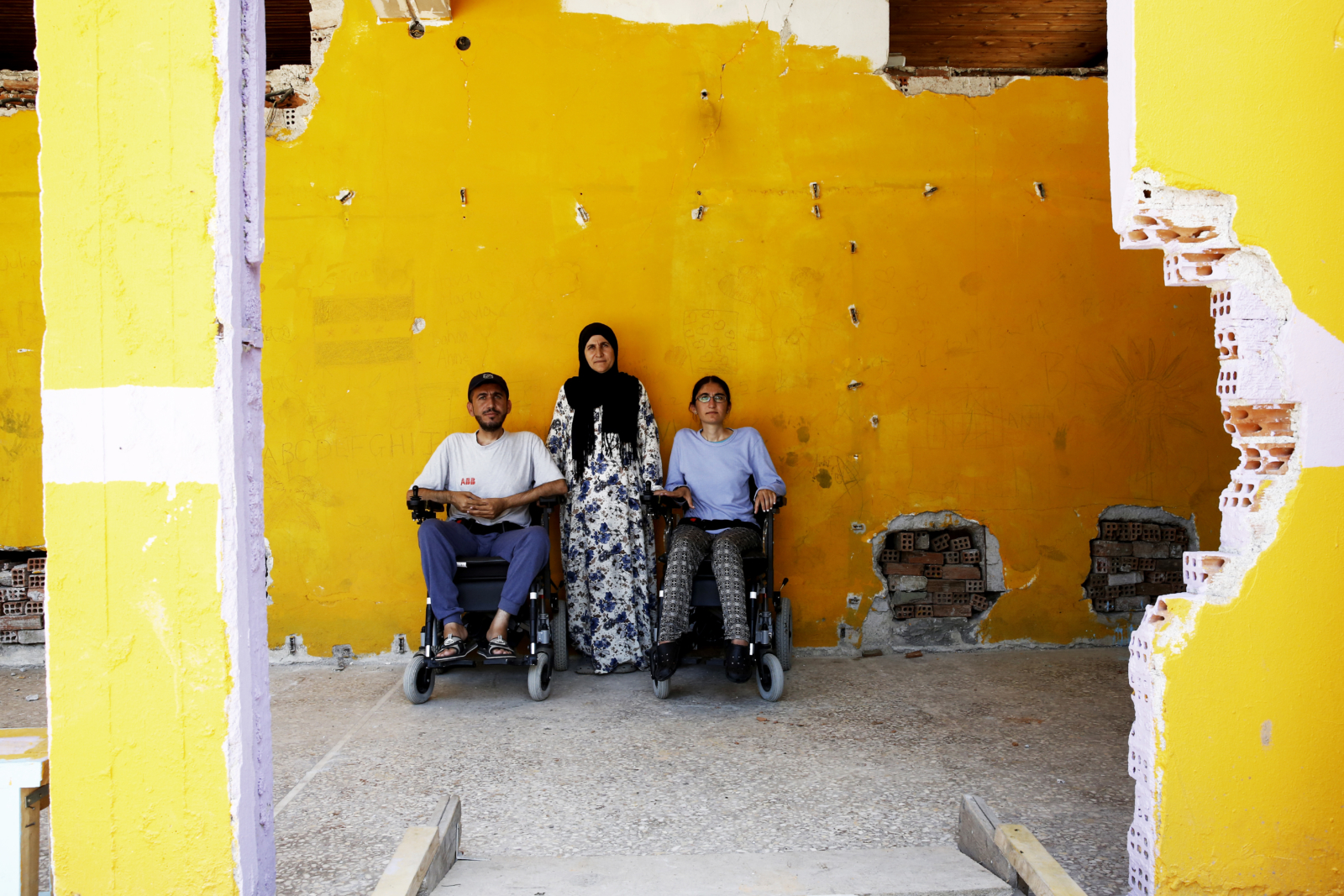 Fleeing Syria as a refugee is tough. Now imagine doing it in a wheelchair

Monica Costa Riba reveals the perilous journey of two Syrian refugees with severe disabilities whose greatest hope is to be reunited with their father.

Strapped onto either side of a horse, 30 year-old Alan Mohammad and his 28 year-old sister Gyan crossed craggy mountains from Iraq and into Turkey last February. Their younger sister walked ahead, leading the horse. Their mother, brother and younger sister trailed behind, pushing heavy wheelchairs up the steep unpaved path.

Alan and Gyan, both teachers, have both suffered from muscular dystrophy since birth. Mobility has always been hard for them but, as the bombs and mortars of the armed group that calls itself Islamic State (IS) rocked their home in Al-Hasakah, in northeastern Syria, the family knew it was time to move on. But where could they go?

They told us how on three occasions they tried to cross the border into Turkey but each time were fired on by Turkish police. So they tried a different escape route, crossing the border into Iraq. The family stayed in Iraq for a year-and-a-half until the approach of IS made it necessary for them to flee again. From there their father carried on with their youngest sister, and eventually reached Germany.

I first met Alan in July in Ritsona refugee camp, about 80km from Athens. “It was a very difficult journey,” he told me. “For ‘normal people’ it is very difficult. But for disabled people it is like a miracle because all the borders between the two countries [Iraq and Turkey] are mountains.”

Once in Turkey the family managed to contact a people smuggler, who they paid $750 each for passage to Greece. The family described how smugglers assured them that there would be around 30 people travelling in a boat that would be nine meters long. But when they arrived on the beach they found that the inflatable boat was only six meters long and there were around 60 people clamouring to get on board. The smugglers told Alan and Gyan that there would be no space for their wheelchairs.

They had no choice but to leave the wheelchairs on the shore, and with the help of their family they crammed themselves into the boat.

Shortly after they set off the engine spluttered and cut out, leaving them adrift in Turkish waters. “It was terrifying. We were in the water for around four hours,” recalls Alan. “Every time I looked around I saw babies and children crying… My mother became faint and at one point my sister told me she could not go on any more.”

Eventually some of the people on the boat managed to restart the motor and they continued their journey. They were finally rescued by the Greek coast guard and taken to the island of Chios where Alan and Gyan were given wheelchairs.

They arrived on the island on 12 March, just days before the EU-Turkey deal came into effect. The borders of other European countries were now closed to them.

Any hopes that they might be permitted to join their father in Germany were dashed and an appointment with the European Asylum Support Office to discuss family reunification failed to materialize. Instead the family were made to board a ferry to the mainland and from there they were taken by bus to Ritsona refugee camp.

Ritsona is an isolated open camp on an abandoned military base situated in the middle of a forest. Physical conditions there are challenging, with sweltering temperatures during the day. The food provided is so poor that much of it gets thrown away, attracting wild boars. The sandy ground and protruding tree roots make it particularly hard for Alan and Gyan to get around, and with winter approaching conditions are set to get much worse.

Yet despite these difficulties, Alan remains positive. He teaches English in a makeshift tented classroom provided by NGOs, the children’s cheerful enthusiasm contrasting starkly with the miserable conditions of the camp. The closure of the so-called Balkan route into northern Europe and the failure of European leaders to resettle and relocate refugees has left almost 60,000 refugees and migrants stranded in Greece, living in a state of constant fear and uncertainty. It has also meant that Alan and his family will remain separated from their father and younger sister for an unknown period of time.

But Alan remains hopeful that things will change. “Here we have doctors and teachers. We left our country because of the war,” he says. “I want to say to the European people that want to welcome refugees, thank you. And to the others, don’t be afraid.”

This article was first published by CNN