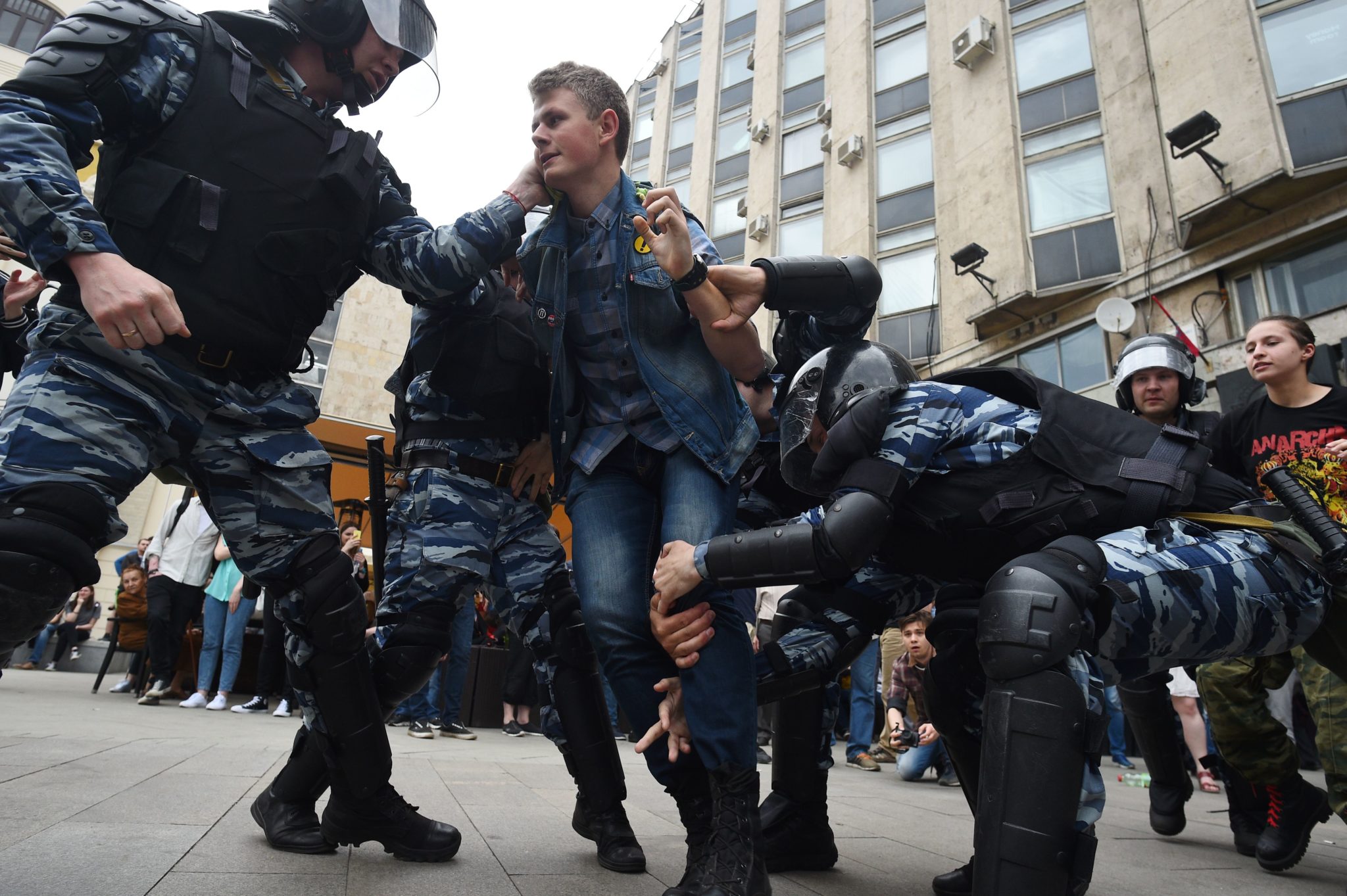 By Denis Krivosheev, Deputy Director for Europe and Central Asia

When the whistle blows in St. Petersburg’s Zenit Arena on Saturday, signaling the start of the 2017 FIFA Confederations Cup, not everyone will be in the mood to cheer.

Scores of people in Russia will be spending the weekend in jail after being swept up in the Russian authorities’ crackdown on anti-corruption protests on Monday. Even by Russia’s grim standards, the backlash was shocking, with hundreds of people arrested simply for exercising their right to peacefully protest under the Russian constitution. Amnesty International has received reports that many of those arrested were held at police stations overnight and subjected to cruel and degrading treatment in detention — piled on top of each other in cells, with some of those in police custody forced to spend the night outside.

For FIFA, holding the tournament in this context will be an early test of its much-publicized new approach to human rights. Its new human rights policy, published just last week, commits the organization to respecting “all internationally recognized human rights.”

It has, meanwhile, established a Human Rights Advisory Board, which includes credible independent voices, and signed up to sit on the Steering Committee of the Mega-Sporting Events Platform for Human Rights.

This switch of tack on human rights is long overdue. It follows intense international criticism of FIFA’s failure, after choosing Russia and Qatar as the host countries of the 2018 and 2022 World Cups, to address serious human rights concerns linked to the hosting of the events.

Labor exploitation in the construction of stadiums and other World Cup infrastructure in Qatar has been well-documented by Amnesty International and others, while in Russia, a Human Rights Watch report released this week detailed appalling exploitation on Russian stadium construction sites, despite FIFA’s commitments to conduct monitoring of labor conditions. FIFA responded to the report by saying that “while incompliances with relevant labor standards” were found, the “overall message of exploitation on the construction sites portrayed by HRW does not correspond” with FIFA’s own assessment.

But how the stadiums get built is not the only thing that should raise serious human rights concerns for FIFA’s leadership this week.

The Confederations Cup could not have come at a more critical time for Russia, where the appetite for public protest is greater than it has been in years, despite the authorities’ best efforts to discourage and intimidate potential protesters. The draconian laws and abusive practices that Russian authorities rely on to silence protests should raise alarm in FIFA headquarters. Activists in Russia are likely to seize the opportunity brought about by the international spotlight on the country, both at this year’s tournament and even more so at next year’s World Cup, to organize protests against the Kremlin’s creeping authoritarianism.

If FIFA is as serious about human rights as it says it now is, then it needs to have a clear plan for how it will respond to protests, and to the disproportionate crackdown by the authorities that will very likely follow. It could hardly have been offered a better test case to demonstrate its new human rights principles. The time has come to prove that it is willing to go beyond paying lip service — even if that means having some difficult conversations with its Russian hosts.

A blueprint for what not to do in such circumstances was set out by the International Olympic Committee (IOC) in 2014. Its failure during the Sochi Winter Olympics to confront Russian authorities over the almost daily arrests and beatings of protesters left a dark stain on the Sochi legacy.

The IOC turned a blind eye to authorities’ stranglehold on freedom of assembly and expression during the Games, which included the reported arrest of a transgender activist for displaying a rainbow banner; the public flogging by Cossacks and subsequent detention of two recently freed members of the punk group Pussy Riot; repeated incidents of beating, interrogation and harassment of protesters; and extensive surveillance targeting journalists throughout the duration of the Games.

Environmentalist and prisoner of conscience Yevgeny Vitishko spent almost two years in prison for apparently damaging a fence in the run-up to the Games, when in reality his intention to report the environmental cost of the Games’ construction was behind his sentencing. To its discredit, the IOC failed to act on requests from Amnesty International and others to condemn this raft of abuses.

The result was that Russian authorities were able to commit violations under a global spotlight, with no apparent consequences. If they have been emboldened by this experience, then it is FIFA’s job to don the referee’s jersey and show that this time, things will be different. As a starting point, it should use its influence with the government to prevent reprisals against free media and human rights NGOs — something it has committed to doing in its new human rights policy.

The ongoing crackdown seen in Russia this week should be generating action in FIFA’s headquarters. FIFA needs to be clear that football’s flagship tournaments cannot take place in a human rights vacuum and that the Russian authorities must guarantee the right to freedom of expression and peaceful assembly.

Global sporting organizations like FIFA and the IOC wield immense power — but with that power comes great responsibility. It is in their hands to pressure governments to stop human rights abuses connected to sporting mega events. A tournament like the Confederations Cup is about so much more than what takes place on the pitch, and FIFA must make clear that fair play does not stop when the players walk off.