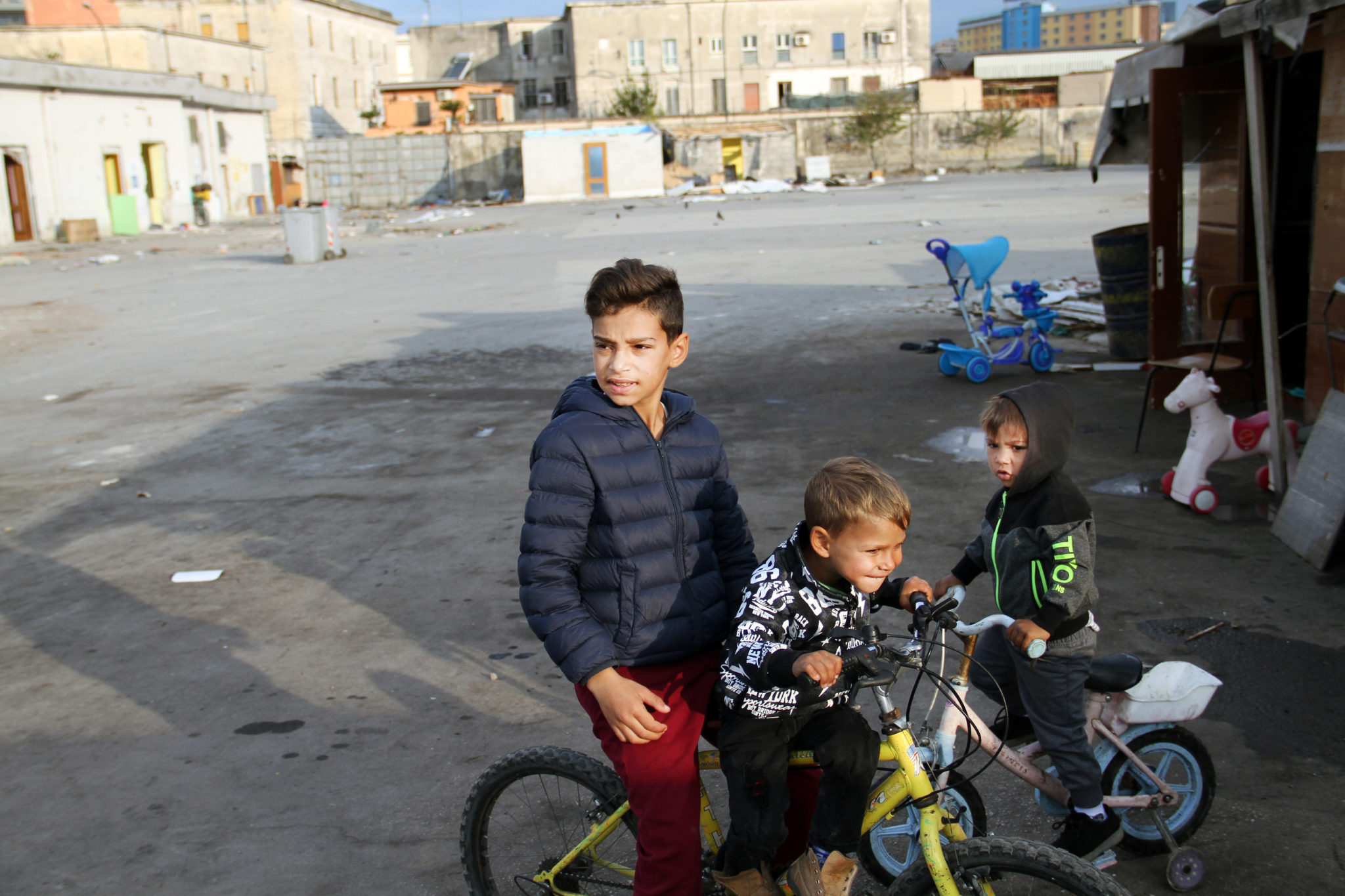 Fast-talking, energetic and keen to learn, Clelia* has much in common with hundreds of thousands of other 15-year-old girls in Italy. However, one staggering difference sets her apart: Clelia is currently too scared to go to school because she fears her home might be bulldozed by the time she returns.

A resident of Germagnano, an informal settlement inhabited by Romani people in Turin, Italy, Clelia has witnessed the Italian authorities forcibly bulldoze the houses of many of her neighbours in recent months. She has seen homes destroyed with heavy machinery while their inhabitants are out; in one case a nine-year old boy was almost crushed inside his crumbling home. He was only saved when his mother screamed at the bulldozer operator to stop. Clelia’s mother has a speech impediment and also doesn’t speak Italian well, so Clelia fears she would find it difficult to confront the authorities and protect their home if any eviction was attempted.

Discrimination against Roma is not new – they are the most disadvantaged minority in Europe. In the past three years, the European Commission has begun legal proceedings against the Czech Republic, Slovakia and Hungary for their systematic segregation and discrimination of Romani children in the education system.

Yet in Italy, where Roma suffer equally shocking discrimination and segregation at the hands of the authorities, this time in relation to housing rights, the European Commission has yet to take any similar decisive action despite having received comprehensive evidence from Amnesty International and other organisations.

During a recent visit to settlements inhabited by Romani people in Milan and Turin, I went from caravan to container, from segregated camp to emergency shelter speaking with dozens of residents. The stories were always the same. People settle in a place, spending time and scarce money building and making homes, only to be forcibly evicted and in some cases see their homes and belongings destroyed. The cycle seems to repeat itself again, and again. Even people who had built their homes over 15 years ago, in camps purposefully created by authorities just for Roma, told us that the threat of forced eviction is ever present.

These forced evictions – carried out without adequate prior consultation, notice, compensation or any offer of adequate alternative accommodation – are illegal under international law. And so is discrimination and segregation, which is also prohibited by European Union law. And yet Italy has gone unchallenged. Two hundred and fifty forced evictions were carried out against Roma by Italian authorities in 2016 alone. The problem is systemic and ongoing. Segregated camps continue to be built by authorities as the only housing option for Roma.

The local authorities in Turin claim that only abandoned homes were demolished. However, people told me that the reality is very different. One 17-year old boy told me that officials knocked on his door one morning ordering him to quickly gather his belongings before bulldozing his home to the ground. At least seven families have been left homeless in recent months.
With none of the safeguards required by international law in place, evictees are left with few options. They can stay in cramped facilities with friends and relatives, move into improvised alternatives including tents, or simply leave and return to Romania.

Many of the Roma camps and settlements that evictees are pushed into in Italy are wholly inadequate, with minimal or in many case no access to water, sanitation or electricity. One such camp in Milan, Via Bonfadini, becomes completely cut off by floodwater when it rains heavily leaving residents trapped and without access to health services and schools. Germagnano, where Clelia lives, is next to a rubbish tip. However, for the people living there, having some sort of roof over their heads is preferable to being rendered homeless.

We met Carlotta in an emergency housing centre made up of a number of containers in Milan, each of them housing approximately five families. Family spaces were separated by head height ‘walls’ leaving them little privacy. She told us about being forcibly evicted from previous homes, being placed in Roma-only camps, and waiting for years, in vain, on the waiting list for social housing.

The European Commission has had overwhelming evidence showing that Italy has been discriminating against, forcibly evicting and segregating the Roma for years, yet the EU continues to remain silent on the issue. In September 2012, the Commission opened ‘pilot’ proceedings against Italy for its treatment of Roma under the Race Equality Directive, yet nothing happened. Evidence of ongoing human rights abuses continue to pile up, yet there is still no infringement in sight, nearly five years on. In April this year the Financial Times revealed that the European Commission had repeatedly blocked action against the country ‘to avoid a damaging public row’.

Meanwhile Clelia is too scared to go to school, and hundreds of children like her have been made homeless and forced into ever worsening and insecure housing. As long as the European Commission refuses to challenge these human rights violations they will not end. The European Commission appears complicit.

Like an ugly scar, discrimination against the Roma runs deep and wide in Europe, and it’s to the shame of all of us that the very institutions designed to uphold principles of equality and fairness look the other way while EU member states erode them.

*Names have been changed to protect identities

Tell Italian authorities to ensure that nobody is left homeless as a result of forced Roma eviction: