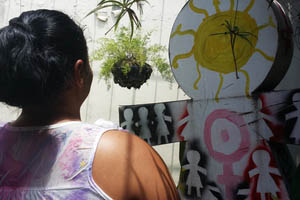 This morning I woke up to the news that “Guadalupe”, a young woman unjustly imprisoned in El Salvador after having a miscarriage, had been pardoned. It was an ecstatic moment, and soon Amnesty International colleagues all over the world were firing off celebratory messages welcoming the news. Justice, for one person at least, had prevailed.

“Guadalupe” was just 18-years-old when she was imprisoned in 2007. She received a 30 year sentence after authorities wrongly suspected she had terminated her pregnancy.

El Salvador has one of the most draconian abortion laws in the world, criminalising abortion on all grounds, even when a woman’s life or health is in danger and in cases of rape. Women suspected of having illegal abortions are also often cruelly and deliberately charged with homicide, as in Guadalupe’s case.

Members of the Legislative Assembly had voted on 16 January on whether to pardon her but “Guadalupe” lost her plea by just one vote. But last night the assembly voted again and this time the pardon was granted. Now, after seven years, Guadalupe will be returning to her young son.

“Guadalupe” is one of a group of 17 similar cases (“the 17”) that will come before the Assembly petitioning for a pardon in the coming months. All are women who come from poor and disadvantaged backgrounds and are serving sentences of up to 40 years for pregnancy-related charges after flawed prosecutions and trials.

Their requests for a pardon have been going through a complex process which includes a judicial review by the Supreme Court of Justice and subsequently requires a majority plenary vote in the Legislative Assembly. But along with the joy I felt at hearing the news, was the nagging memory of all the other women that had suffered the same fate. They were stories I knew only too well.

I was in El Salvador last October as part of an Amnesty mission to the country focused on our My Body My Rights campaign. It was a trip marked by stark contrasts. On one hand I was appalled by the impact of the total ban on abortion there on the human rights of women and girls, on the other, incredibly inspired by the amazing women’s rights activists I met during the trip. Those activists are of course been euphoric with the news.

Many of them were in the assembly building watching over the vote. I watched their anxious tweets and Facebook posts from afar. Activists like Morena Herrera and Sara Garcia, and lawyers like Denis Munoz have been working tirelessly for years to reach this moment. The release of Guadalupe could be a watershed moment in their fight.

But there is much more to do. Fifteen of “the 17” women that activists in El Salvador and across the globe have been campaigning for, still languish in prison.

As part of my visit to El Salvador I met another of “the 17”, Maria Teresa, in Ilopango prison. Conditions there were deplorable. Prisons in El Salvador are 900% overcrowded. Maria Teresa had been in prison for three years already when we met.

Just like Guadalupe she had suffered a miscarriage but doctors called the police, reporting suspicions that she had an illegal abortion. Like other young women living in poverty, she was judged as guilty of a crime as soon as she presented to doctors. She was charged with having had an abortion, but those charges were later changed to aggravated homicide and she was sentenced to 40 years.

I don’t know yet if she’s heard the news. I can only hope it will bring her, and the many other women imprisoned on these horrendous charges, some small relief. I hope it offers them some hope,

I know it will double the determination of Amnesty International members across the globe to work to secure justice for her, for the rest of “the 17” and for all women and girls who are criminalised and who suffer grave human rights violations as a result of the total ban on abortion in El Salvador.

Image: El Salvador’s total ban on abortion is forcing women and girls to secretly risk their lives and condemning others to decades behind bars. © Amnesty International