Amnesty International is reiterating its calls for the release of the Al Jazeera journalists Baher Mohamed and Mohamed Fahmy as their retrial began in Cairo today.

“The message today’s trial sends is that there is no justice for Egyptians.”

The men have been in prison for more than a year. Their earlier convictions were overturned after a deeply flawed trial.

“It is crucial that Baher Mohamed and Mohamed Fahmy’s continuing ordeal is not forgotten, particularly now that their Australian colleague Peter Greste is a free man. Like him, they are guilty of nothing more than carrying out their jobs as journalists. There is no reason that they should remain behind bars. The authorities should put an immediate end to their torment by dropping the charges and releasing them immediately and unconditionally,” said Hassiba Hadj Sahraoui. 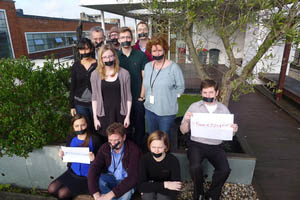 Peter Greste was released on 1 February after seeking deportation under Egyptian legislation permitting the transfer of foreign nationals to their home countries to face trial or serve their sentences in cases of the “highest interest of the state”. The men’s arrest had caused an international outcry.

The convictions of all three men were overturned by the Court of Cassation on 1 January 2015 on procedural grounds and a re-trial was ordered. They had been serving sentences for broadcasting “false news” and alleged ties to the banned Muslim Brotherhood movement.

Mohamed Fahmy holds dual Egyptian and Canadian citizenship and his family had told journalists last week that he may be forced to renounce his Canadian nationality in exchange for his freedom.