EGYPT: Mass trial of hundreds of Morsi supporters is a ‘pantomime’ – Irish teenager and Prisoner of Conscience Ibrahim Halawa must be released

As news breaks that three judges have recused themselves from a mass court case in Egypt, Amnesty International remains concerned that show trials followed by mass death sentences are becoming a grim trade mark of Egyptian justice.

Three judges who made up a Court Panel which was due to hear the case against 494 people today, have recused themselves on account of objections raised by the defendants’ lawyers. The Cairo Appeal Court will schedule another criminal court panel at a later date. The majority of the defendants could face the death sentence in what amounts to little more than a pantomime the organization warns.
The trial was in relation to protests that took place on 16 and 17 August 2013, in Ramsis, Cairo where at least 97 people died, most of them as a result of a reckless use of force by the security forces. Those charged include 12 minors, who were held in detention with adults, in direct contravention of Egyptian law. 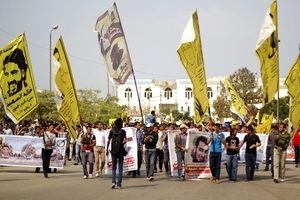 Image : Students protest in 2013 at Al-Azhar University against the military coup over Morsi © Alaa Elkamhawi / Demotix

Colm O’Gorman, Executive Director of Amnesty International Ireland said: “Had it gone ahead, this trial was set to be little more than a pantomime. In recent months Egyptian courts appear to have been handing out mass death sentences based on flimsy evidence and following deeply flawed proceedings. These show trials followed by mass death sentences are becoming Egypt’s grim trademark.”
More than 400 of the 494 defendants are charged with murder and attempted murder, offences that are normally punishable by death under Egyptian law. The remainder are charged with offences including destroying public property, protesting without authorisation, attacking security forces and hindering the work of national institutions.

Among those on trial are 11 children and Ibrahim Halawa, an Egyptian Irish national, who was a 17-year-old child at the time of his arrest. He has since turned 18. Amnesty International has conducted a thorough examination of his case.
He and his three sisters were among those arrested after taking refuge in a mosque. He was shot in his hand when the security forces stormed the building, but was not given access to medical care for his injury, and the only treatment he received was from a cellmate who happened to be a doctor. He was held in detention with adults contrary to Egypt’s Child Law which provides that children must be held in juvenile detention centres and be separated from adults.
Amnesty International has concluded that Ibrahim Halawa is a Prisoner of Conscience, detained solely for peacefully exercising his right to freedom of expression. The organisation is calling for him to be released immediately and unconditionally, with all charges against him dropped.
“Ibrahim’s case is just one of many cases of injustice being meted out in Egypt’s courts. It shows the government’s determination to flout its obligations under international law,” said Colm O’Gorman.
According to press reports, even the Grand Mufti, the most senior religious figure, has refused to endorse death sentences against other Muslim Brotherhood supporters saying there was not enough evidence to support the charges. The Mufti reportedly added that the charges by the prosecutor depended entirely on investigations and testimonies of national security officers.
According to the case file for today’s case, seen by Amnesty International, there were to have been 100 witnesses, most of whom are police officers or government officials.

“All defendants enjoy the right to a fair trial without recourse to death penalty. Should the trial go ahead, the defendants must be present in court in order to be able to hear and challenge the prosecution case and present a defence, in person or through a lawyer. They must be able to call witnesses on their behalf and to examine witnesses against them,” said Colm O’Gorman.
Background
The protests that took place on 16 and 17 August 2013, in Ramsis Cairo, were held in support of ousted President Mohamed Morsi and had originally been peaceful. However, following clashes with the security forces, protestors had sought safety in the Al Fath mosque, which they locked themselves in overnight. The security forces shot tear gas into the mosque which led to the death by suffocation of at least one woman.
There was an exchange of fire with the security forces, from the outer areas of the mosque which the security forces allege the protestors were involved in. Yet Amnesty International researchers who were present at the time, have said that there is no way the protestors could have shot at the security forces as they were all locked inside the inner part of the mosque.