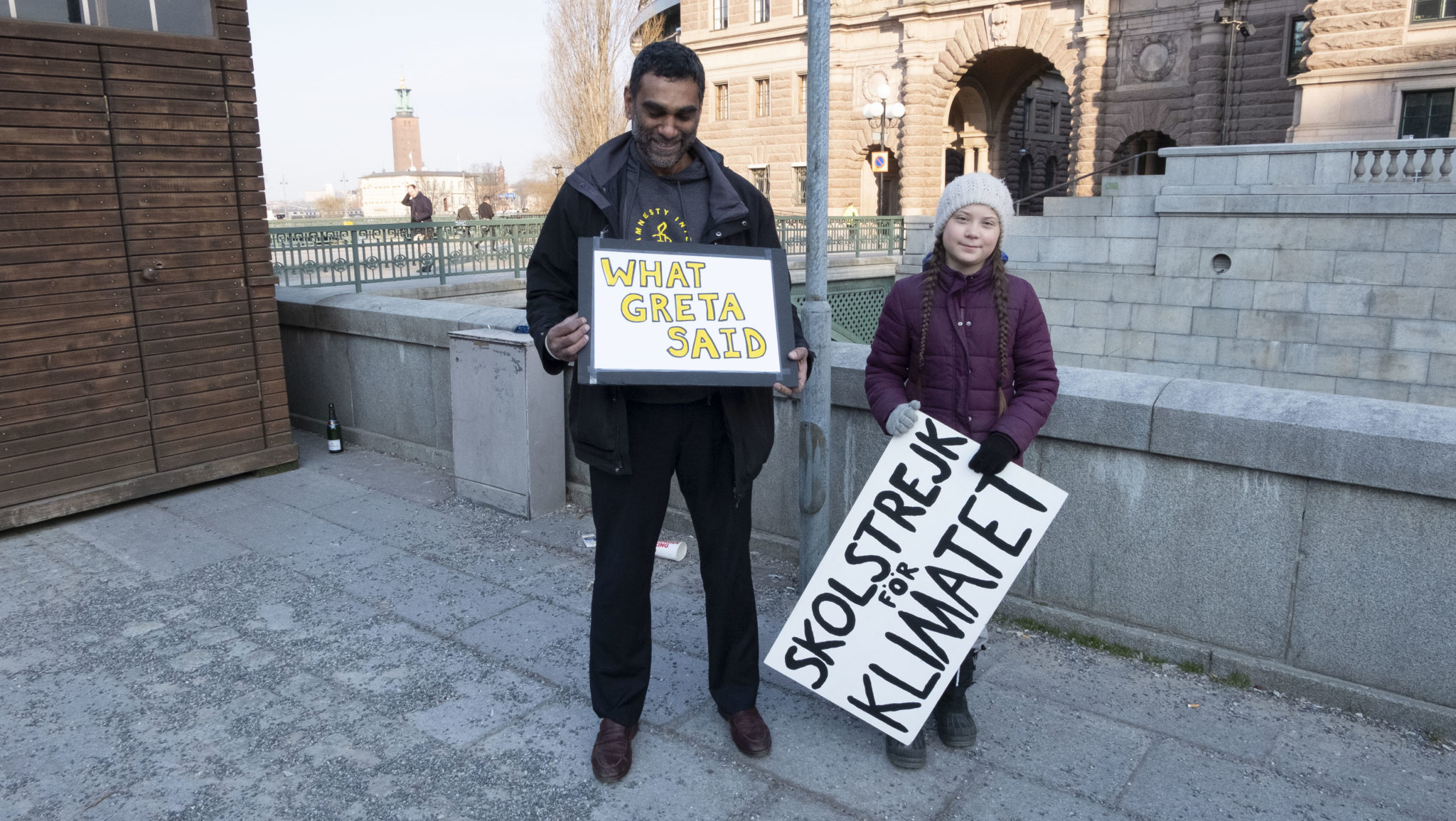 Climate change activist Greta Thunberg and the Fridays for Future movement of school-children have been honoured with Amnesty International’s Ambassador of Conscience Award for 2019, the human rights organisation announced today.

“The Ambassador of Conscience Award is Amnesty International’s highest honour, celebrating people who have shown unique leadership and courage in standing up for human rights. I can think of no better recipients this year than Greta Thunberg and the Fridays for Future climate strike movement,” said Kumi Naidoo, Secretary General of Amnesty International.

“We are humbled and inspired by the determination with which youth activists across the world are challenging us all to confront the realities of the climate crisis. Every young person taking part in Fridays for Future embodies what it means to act on your conscience. They remind us that we are more powerful than we know and that we all have a role to play in protecting human rights against climate catastrophe.”

“Young people are often told they are the leaders of tomorrow. I am so glad that Greta Thunberg and the Fridays for Future activists ignored that message. If they wait until tomorrow, there will be no future for any of us. They have proved that they are already leaders, and now it’s time for adults to follow their lead,” said Colm O’Gorman, Executive Director of Amnesty International Ireland.

The Ambassador of Conscience Award was founded in 2002 to celebrate individuals and groups who have furthered the cause of human rights by acting on their conscience, confronting injustice and using their talents to inspire others.  Previous awardees include Nelson Mandela, Malala Yousafzai, Harry Belafonte, Ai Weiwei, the Youth Groups of West and Central Africa, Angélique Kidjo, the Indigenous rights movement in Canada, Alicia Keys and Colin Kaepernick.

A youth movement determined to change the world

The Fridays for Future movement was started by Greta Thunberg, a teenager from Sweden who in August 2018 decided to miss school every Friday and instead protest outside the Swedish parliament until it took more serious action to tackle climate change.

Her efforts to raise awareness of the climate crisis quickly went global. More than 1 million young people from all over the world took part in the most recent global day of Fridays for Future school strikes on 24 May. Demonstrations were held in more than 100 countries, including Australia, Brazil, India, Nigeria, Pakistan, United Kingdom, Germany, Japan, the Philippines and Uganda.

“It is a huge honour to receive Amnesty International’s Ambassador of Conscience Award on behalf of Fridays for Future. This is not my award, this is everyone’s award. It is amazing to see the recognition we are getting and know that we are fighting for something that is having an impact,” said Greta Thunberg.

“To act on your conscience means that you fight for what you think is right. I think all those who are part of this movement are doing that, because we have a duty to try and improve the world. The blatant injustice we all need to fight against is that people in the global south are the ones who are and will be most affected by climate change while they are the least responsible for causing it.”

While the climate crisis is usually understood through the impacts it is having on our natural environment, the devastating consequences of these impacts on people, both now and in the future, make it an urgent human rights issue as well. Climate change compounds and magnifies existing inequalities. And its effects will continue to grow and worsen over time, creating ruin for current and future generations.

Amnesty International has said that the failure of governments to act on climate change may well be the biggest inter-generational human rights violation in history.

“Human rights and the climate crisis go hand in hand. We can’t solve one without solving the other. Climate change means people won’t be able to grow food, their homes will come under threat and their health will be compromised. Governments have a duty to protect us, so why are they doing nothing to stop climate change from devastating our lives?” said Greta Thunberg.

Amnesty International calls on states to scale up climate action substantially and to do so in a manner consistent with human rights. One of the crucial ways this can happen is if the people most affected by climate change, such as children and young people, are able to engage in efforts to address and mitigate climate change. They should be provided with the necessary information and education to participate meaningfully in discussions and should be included in decision-making that directly affects them.

“Sometimes I feel really sad because some of the people I try to talk to won’t listen. Some people insult us, others think we are politicians, and others ignore us entirely, they tell us maybe we won’t finish what we’ve started.  But I can assure everyone that we are really determined to finish what we have started, because our futures are on the line,” said Kananura Irene, a Fridays for Future activist from Kampala, Uganda.

The youth activists behind Fridays for Future are now calling on adults to join them. On Friday 20 September, ahead of the United Nation Climate Action Summit in New York, activists will commence a week of climate action with a worldwide strike for the climate. Amnesty International supports the call for all adults who are able to join the strike and show solidarity.

The Ambassador of Conscience Award celebrates individuals and groups who have furthered the cause of human rights through acts of conscience, confronting injustice and using their talents to inspire others.

Through the award, Amnesty International aims to raise awareness of inspirational stories and human rights issues and encourage public action.

The award was inspired by the poem From the Republic of Conscience, written for Amnesty International by the late Irish poet Seamus Heaney.