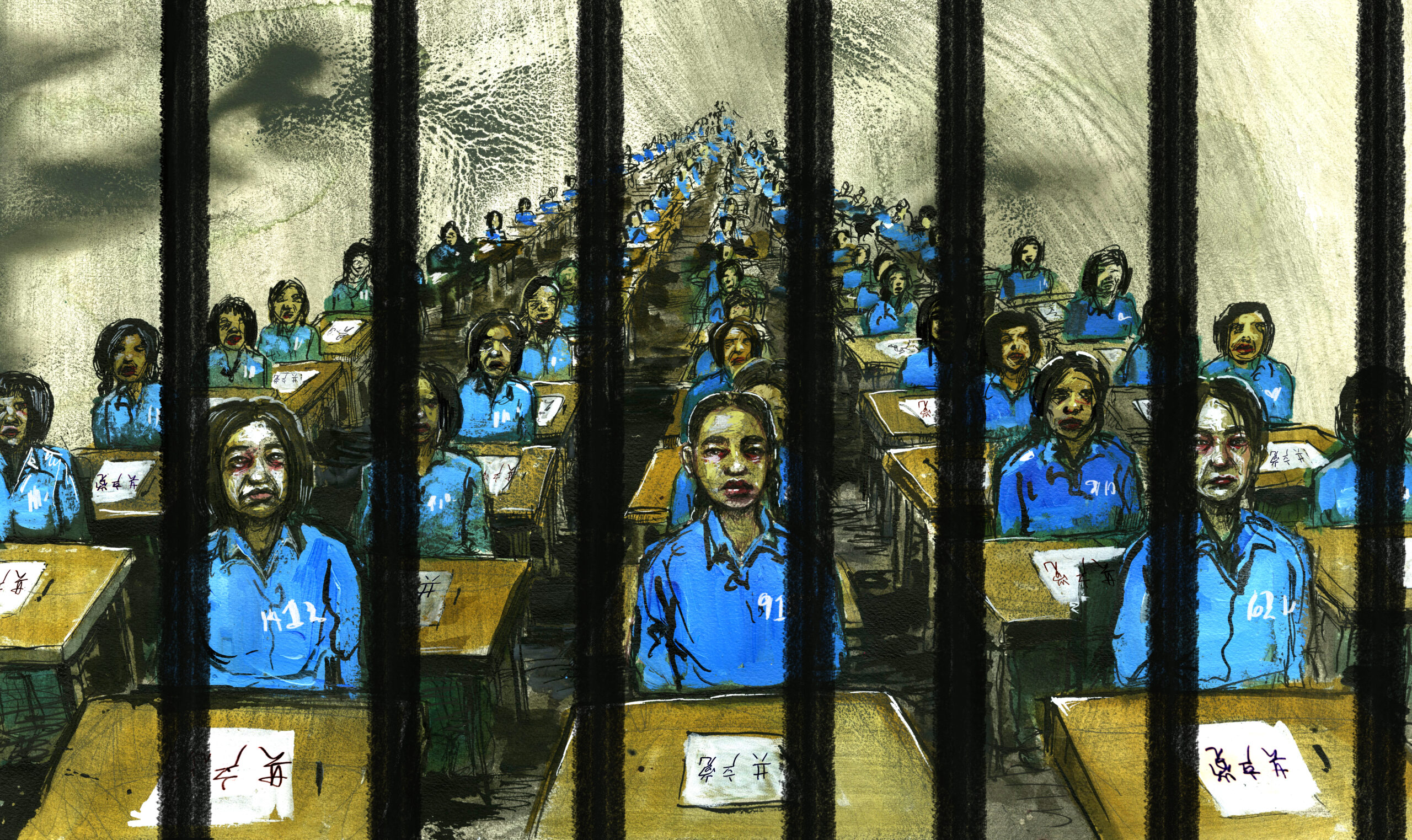 China: Draconian repression of Muslims in Xinjiang amounts to crimes against humanity

In the 160-page report, ‘Like We Were Enemies in a War’: China’s Mass Internment, Torture, and Persecution of Muslims in Xinjiang’, Amnesty International’s Crisis Response team released dozens of new testimonies from former detainees detailing the extreme measures taken by Chinese authorities since 2017 to essentially root out the religious traditions, cultural practices and local languages of the region’s Muslim ethnic groups. Carried out under the guise of fighting “terrorism”, these crimes have targeted ethnic Uyghurs, Kazakhs, Hui, Kyrgyz, Uzbeks and Tajiks.

Chinese authorities have built one of the world’s most sophisticated surveillance systems and a vast network of hundreds of grim “transformation-through-education” centres – actually, internment camps – throughout Xinjiang. Torture and other ill-treatment is systematic in the camps and every aspect of daily life is regimented in an effort to forcibly instil a secular, homogeneous Chinese nation and Communist party ideals.

“Uyghurs, Kazakhs and other Muslim minorities face crimes against humanity and other serious human rights violations that threaten to erase their religious and cultural identities.”

“It should shock the conscience of humanity that massive numbers of people have been subjected to brainwashing, torture and other degrading treatment in internment camps, while millions more live in fear amid a vast surveillance apparatus.”

All of the more than 50 former detainees Amnesty International interviewed were detained for what appears to be entirely lawful conduct, such as possessing a religious-themed picture or communicating with someone abroad. A government cadre who participated in mass arrests in late 2017 told the organisation how police took people from their homes without warning and detained them without any due process.

Most survivors who spoke to Amnesty International were first interrogated at police stations, where they had their biometric and medical data recorded before being transferred to a camp. They were often interrogated in “tiger chairs” – steel chairs with affixed leg irons and handcuffs that restrain the body in painful positions. Beatings, sleep deprivation and overcrowding are rampant in the police stations, and detainees reported being hooded and shackled during their interrogation and transfer.

From the moment they entered the prison-like internment camps, detainees’ lives were extraordinarily regimented. They had no privacy or autonomy, and they faced harsh punishments – sometimes collectively with their cellmates – for trivial disobedience. Internees were forbidden to speak freely to each other, and they were severely punished when they responded to prison guards or other officials in their native tongues instead of Mandarin. Every activity in the detainees’ daily routine was pre-ordained and their behaviour was constantly monitored and evaluated.

One woman who was detained for having WhatsApp on her phone said: “[Every day] you get up at 5am and have to make your bed, and it had to be perfect. Then there was a flag-raising ceremony and an ‘oath-taking’. Then you went to the canteen for breakfast. Then to the classroom. Then lunch. Then to the classroom. Then dinner. Then another class. Then bed. Every night two people had to be ‘on duty’ [monitoring the other cellmates] for two hours… There was not a minute left for yourself. You are exhausted.”

In the early weeks or months of internment, detainees are typically forced to either sit still or kneel in the same position in their cell, in complete silence, for most of their waking hours. Following this, they generally undergo forced “education”, where they are indoctrinated to disavow Islam, forgo using their language and other cultural practices, and study Mandarin Chinese language and Chinese Communist Party propaganda.

Other than being escorted under armed guard to and from canteens, classes or interrogation, detainees practically never leave their cells and rarely see sunlight or have outdoor access or exercise.

This included the cumulative psychological effect of their daily dehumanization, as well as physical torture in the form of beatings, electric shocks, solitary confinement, deprivation of food, water and sleep, exposure to extreme cold, and the abusive use of restraints, including torture tools like tiger chairs. Some reported being restrained in a tiger chair for 24 hours or more.

An older woman who was punished for defending her cellmate said she was taken to a small, dark, cold and windowless room where she had her hands and feet cuffed and was forced to sit on an iron chair for three days straight.

Two former detainees said they had been forced to wear heavy shackles – in one case for an entire year. Others described being shocked with electric batons or sprayed with pepper spray.

Some detainees reported being tortured multiple times, while others were forced to watch their cellmates being tortured. Amnesty International learned of one case where a detainee is believed to have died as a result of being restrained in a tiger chair, in front of his cellmates, for 72 hours, during which time he urinated and defecated on himself.

Both inside and outside the camps, Xinjiang’s Muslims are among the most heavily surveilled populations in the world.

For at least several months after being released from a camp, all former internees are under near-constant electronic and in-person surveillance, including invasive “homestays” by government cadres who monitor them and report “suspicious” behaviour. This could be peaceful religious practices, the use of unauthorized communications software (such as VPNs or WhatsApp), or purchasing an “unusual” amount of fuel or electricity.

Freedom of movement for released internees is also heavily restricted, with a massive number of security forces patrolling the streets and operating thousands of checkpoints, euphemistically known as “convenience police stations”.

Muslims are not free to practice their religion in Xinjiang. Dozens of Muslim men and women told Amnesty International the regional Chinese authorities showed extraordinary hostility towards their Islamic faith. Basic religious and cultural practices have been deemed “extremist” and used as grounds for detention.

As a result, most people have stopped praying or showing any outward signs of observing Islam. This extends to dress, grooming and even speech. “We couldn’t say ‘as-salamu-alaykum’ [a typical greeting in many Islamic cultures meaning “peace be upon you”] …anymore,” one man told Amnesty International. Qur’ans, prayer mats and other religious artifacts have effectively been banned.

Former Chinese government cadres told Amnesty International how they barged into people’s homes to confiscate religious items. “We told them to remove photos [of mosques] and put up [Chinese] flags,” one said.

Those interviewed by Amnesty International described how mosques, shrines, gravesites, and other religious and cultural sites have been systematically demolished or repurposed throughout Xinjiang.

The Chinese government has gone to extraordinary lengths to cover up its violations of international human rights law in Xinjiang. Authorities threaten, detain and mistreat anyone who speaks out.

The fate of hundreds of thousands of detainees is not known. Many may remain in detention in the camps. Others have been given long prison sentences – Chinese state data shows significant increases in prison sentences and satellite imagery shows significant new prison construction in Xinjiang since 2017. Others have been transferred to situations of forced or coerced labour.

“China must immediately dismantle the internment camps, release the people arbitrarily detained in them and in prisons, and end the systematic attacks against Muslims in Xinjiang,” said Agnès Callamard.

“The international community must speak out and act in unison to end this abomination, once and for all. The UN must establish and urgently dispatch an independent investigative mechanism with a view to bringing those suspected of responsibility for crimes under international law to account.”