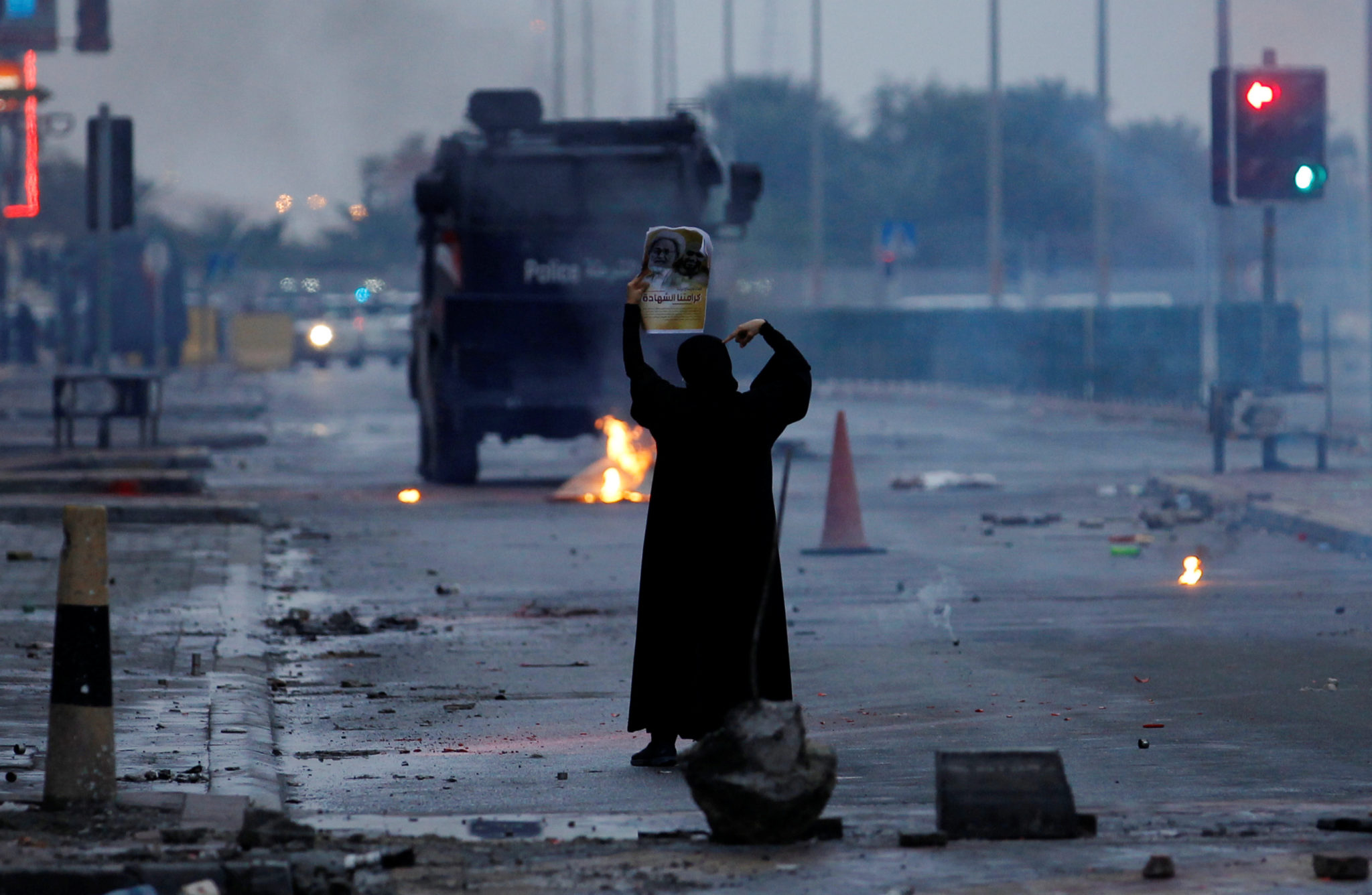 Bahrain: A year of brutal government repression to crush dissent

A new report published by Amnesty International today sheds light on the repressive tactics used by the Bahraini government over the past year to crush civil society and violently crack down on protests, leading to the deaths of six people, including one child. ‘No one can protect you’: Bahrain’s year of crushing dissent documents how, between June 2016 and June 2017, at least 169 government critics or their relatives were arrested, tortured, threatened or banned from travel by the authorities.

“Using an array of tools of repression, including harassment, arbitrary detention and torture, the government of Bahrain has managed to crush a formerly thriving civil society and reduced it to a few lone voices who still dare to speak out. The majority of peaceful critics, whether they are human rights defenders or political activists, now feel the risks of expressing their views have become too high in Bahrain,” said Colm O’Gorman, Executive Director of Amnesty International Ireland.

Since mid-2016, the Bahraini authorities have embarked on a systematic campaign to eliminate freedom of speech in the country. The main targets of this far-reaching repression have been human rights defenders, lawyers, journalists, political activists, Shi’a clerics and peaceful protesters. Activists living outside the country have also faced harassment and intimidation. The authorities have increasingly used provisions in Bahrain’s Penal Code which criminalise freedom of expression to prosecute scores of people for merely expressing their opinion.

Prominent human rights defender Nabeel Rajab, who is president of the Bahrain Center for Human Rights, is one of the most targeted human rights defenders in Bahrain. He remains behind bars as a prisoner of conscience after being sentenced to two years in jail for media interviews he gave, and he faces a further 15 years in jail, simply for tweeting. Just before his re-arrest in June 2016, he told Amnesty International:

“I was jailed five times in the past year… Most of the time I’m banned from travelling, targeted, jailed, tortured, and my house targeted, attacked by rubber bullets and teargas… My children [have been] targeted by the government, [as have] my wife, my family, my mother, whom I lost while I was in jail and I was not allowed to see her before she died.”

Between June 2016 and June 2017, Amnesty International received reports of nine cases of government critics being tortured in detention, eight of them in May 2017 alone Human rights defender Ebtisam al-Saegh was one of them. Ebtisam told Amnesty International that on 26 May she was blindfolded, sexually assaulted, beaten and kept standing for most of the seven hours she was being interrogated by the National Security Agency (NSA). “They took away my humanity”, she said.

“We have heard horrific allegations of torture in Bahrain. They must be promptly and effectively investigated and those responsible brought to justice,” said Colm O’Gorman.

During that one-year period, the Bahraini government also launched an all-out campaign to dismantle Bahrain’s political opposition, dissolving al-Wefaq, the main opposition group, and Waad, a secular opposition political party, on unfounded charges. Political leaders and members of opposition groups continued to be imprisoned or otherwise targeted; and in May 2017 the authorities stepped up their attempts to silence political activists by detaining them for interrogation, during which some reported they were threatened, tortured or otherwise ill-treated.

The most notable clampdown on freedom of assembly has occurred in the village of Duraz, home of leading Shi’a spiritual leader Sheikh Isa Qassem. After the government arbitrarily revoked his nationality in June 2016, large protests erupted across the country and an 11-month daily sit-in was held outside his home.

In response, the Bahraini authorities used legislation to ban peaceful gatherings. More than 70 protesters, Shi’a clerics and activists were charged with participating in an “illegal gathering” between June and November 2016.

Since the beginning of 2017, Bahrain’s security forces, including the NSA, have increasingly used violence to respond to the largely peaceful protests. Amnesty International has documented security officers beating protesters, firing tear gas, shotguns and semi-automatic rifles directly at protesters and driving armoured vehicles and personnel carriers into protests.

Eighteen-year-old Mustapha Hamdan died after he was shot in the back of his head as he ran away from masked officers in January 2017. Five more people including a 17-year-old child were killed in clashes in Duraz in May, hundreds more were injured and 286 arrested. Thirty-one security officers were also injured.

Despite the worsening situation, and blatant human rights violations being perpetrated in Bahrain, most governments have remained silent or toned down their public criticism. Among them are the UK and USA, two countries with a particularly high level of influence in Bahrain. The UK has continued to praise Bahrain’s “progress on its reform agenda”, while its occasional comments on the human rights situation have been muted.

The USA had publicly criticised Bahrain during the Obama administration, announcing in September 2016 that sales to Bahrain of fighter jets would depend on “progress on human rights”. Since the election of President Donald Trump, however, there has been a noticeable shift. In March 2017 President Trump lifted the conditions on the sale of jets and, two months later, told Bahrain’s King Hamad “there won’t be strain with this administration”. Bahrain appears to have interpreted this statement as a green light to pursue its repression, violently crushing the Duraz protests just two days later.

“The failure of the UK, USA and other countries that have leverage over Bahrain to speak out in the face of the disastrous decline in human rights in the country over the past year has effectively emboldened the government to intensify its endeavour to silence the few remaining voices of dissent.  The outlook for human rights in Bahrain looks bleak if the authorities continue this crackdown unchecked. They should start by immediately reining in their security forces, releasing prisoners of conscience and allowing banned civil society organisations to operate again. They should also make sure that those who have been subjected to torture and other serious violations are delivered justice,” said Colm O’Gorman.