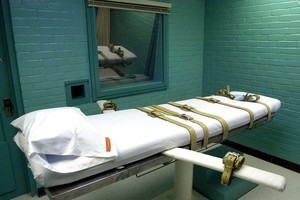 Arkansas Kills Prisoner in First of Horrific Spate of Executions

Arkansas executed Ledell Lee today, the first of four prisoners scheduled to be executed before the state’s supply of lethal injections expires at the end of the month. This was the first execution in the state since 2005. Lee’s final appeals had requested DNA testing that could potentially prove his innocence, but those appeals were denied.

A report released earlier this month by Amnesty International showed that for the first time since 2006, and only the second time since 1991, the U.S. is not among the world’s five biggest executioners. The number of executions (20) in 2016 reached the lowest level recorded in any year since 1991. The number of executions has fallen every year since 2009, (except 2012, when it stayed the same).

“Today is a shameful day for Arkansas, which is callously rushing the judicial process by treating human beings as though they have a sell-by date,” said James Clark, Senior Campaigner at Amnesty International USA.

“While other states have increasingly come to the conclusion that the capital punishment system is beyond repair, Arkansas is running in the opposite direction from progress. This assembly line of executions must stop and this cruel and inhuman punishment should be ended once and for all.”

The Arkansas State Supreme Court has allowed a spate of executions in Arkansas to move forward after they were temporarily halted this week. Arkansas had originally scheduled eight executions in the span of 10 days because its lethal injection supply is set to expire at the end of the month. Four of those executions had been put on hold prior to today’s ruling. Execution warrants for Bruce Ward and Don Davis have now expired, and stays of execution are in place for Stacey Johnson and Jason McGehee.