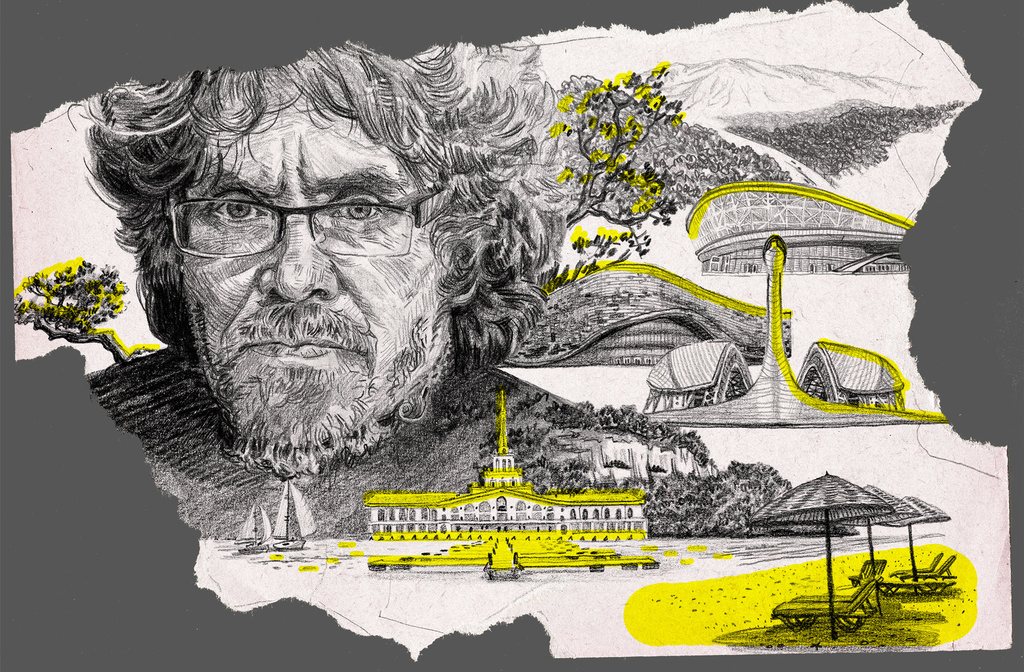 All his life he has been protecting the environment, but the Russian government could not protect him. Andrey Rudomakha is a human rights defender from Sochi who was brutally attacked last year.

I grew up in a small village in the Seversky District of Krasnodar Territory in Southern Russia. My village stands between the forest and the plains. As a child, I loved going to the forest and would spend hours walking amongst the trees near my village. From those days, I still have a close connection with nature, and this connection was one of the main reasons why protecting the environment became my life’s work. I also participated in a public movement against the construction of a nuclear power station in Krasnodar Territory that brought me closer to nature and the environment. This was in 1987, just one year after the Chernobyl nuclear disaster and in the middle of Perestroika. At the time, we succeeded in stopping the construction of the nuclear plant. Since then, I have been involved in working for the protection of the environment and defending people’s rights to a healthy environment.

Krasnodar Territory is a unique area. Most of it lies in the mountainous forest zone, but there is a part in the Azov marshland, and in the southeast some steppe areas still exist. However, the environment is being destroyed rapidly because this is an attractive region for range urban projects. There is hardly any area in Russia where so many projects that risk damaging the environment have been undertaken in the last 20 years, including the construction of infrastructure for the Winter Olympics of 2014.

The FIFA World Cup will be held at sites built for the 2014 Winter Olympics. The Fisht Stadium is built on the Imereti Lowlands that were once home to a unique natural habitat of the Colchian Wetlands. This was the only area in Russia with an ecosystem like this. It served as a stopover for vast numbers of migratory birds. A large part of this habitat was destroyed back in the Soviet times and some of the remaining areas were destroyed during the preparations for the 2014 Olympics. The environmental park set up there today to replace the natural habitat is a complete sham. The fans who are coming to see the matches here must remember that the World Cup is held at the Olympic sites built at a very high cost to the environment, and people living in the region. These fans have to know that all of this has its own dark history.

Russia is in serious breach of its post-Olympic pledges concerning the regeneration of the Mzymta river and the creation of newly protected environmental areas. In my view, it is not just the responsibility of Russia but also with international organisations such as International Olympic Committee and United Nations Environment Programme who are responsible for overseeing this project, and they have not done so properly. I would like the World Cup to leave a legacy, not only of sporting achievements but also of an improved environment in the area. We are currently investigating a large construction project owned by some high-ranking official in Krinitsa village, near Gelendzhik, yet another Black-Sea residence involving seizure of forest areas and large-scale tree felling. And this is not only a private residence, it’s also a chateau vineyard. The vines have already been planted and the winery is now being built.

In December 2017, my colleagues and I were attacked after we had gone to inspect the environmental damage from this construction project. We returned to the flat of one of our activists and the attackers were waiting for us there. They knew that we would go there. It is most likely that we were followed from the construction site in Krinitsa. Not only did the assailants attack us but they also took all our photographic materials to prevent this information from being published.

At first, the local police opened an investigation, and then it was sent to Main Investigative Directorate of Krasnodar Territory. Strange as it may seem, after this, the investigation just stopped despite abundant evidence, including fingerprints on the car, CCTV camera footage of the attack and of the movements of the assailants in the area. Also we were able to identify the car in which the assailants had arrived.  Not once was I called in for questioning. Usually crimes with so much available evidence are solved very promptly.

This was not the first attack against our organization; we have been threatened in the past. In January 2018, my colleague Dmitry Shevchenko and I were “strongly advised” to leave Russia in an anonymous letter. Several of my colleagues were forced to leave the country because of the threats they received. Our work stands in many people’s way. Everything we do is risky and dangerous as we infringe on the interests of “big people”. Unfortunately, in Russia there is no reason to hope for an effective investigation. I know that my work carries some risk and I have learnt to understand that when you are fighting against something, that something can fight back.

My work to protect the environment is not just a job, it’s my life work. This is what energizes me and gives me personal fulfilment. It so happens that my life’s work is where I live. I am very fond of the Caucasus and don’t care much for travelling abroad or around the country. I find it more interesting to be here, to visit villages where I have never been before. This is where I want to live and work, to transform and change things here.

We are eco-centrists and when an opportunity arises to involve international mechanisms or to cooperate with the government we always take it. On one occasion, our ally in a campaign was the Federal Security Service’s Directorate in the Republic of Adygea. The head of agency at the time shared our interest in protecting the environment. We met him, told him about the risks of particular projects to the environment and he supported us. His support played a major part in stopping certain projects.

I do not believe in quick changes but I do believe in gradual systemic change. I believe that the environmental movement is a way to change our country for the better. A better world is built gradually and by non-violent means, it is nurtured from the seeds that are sown in the society.