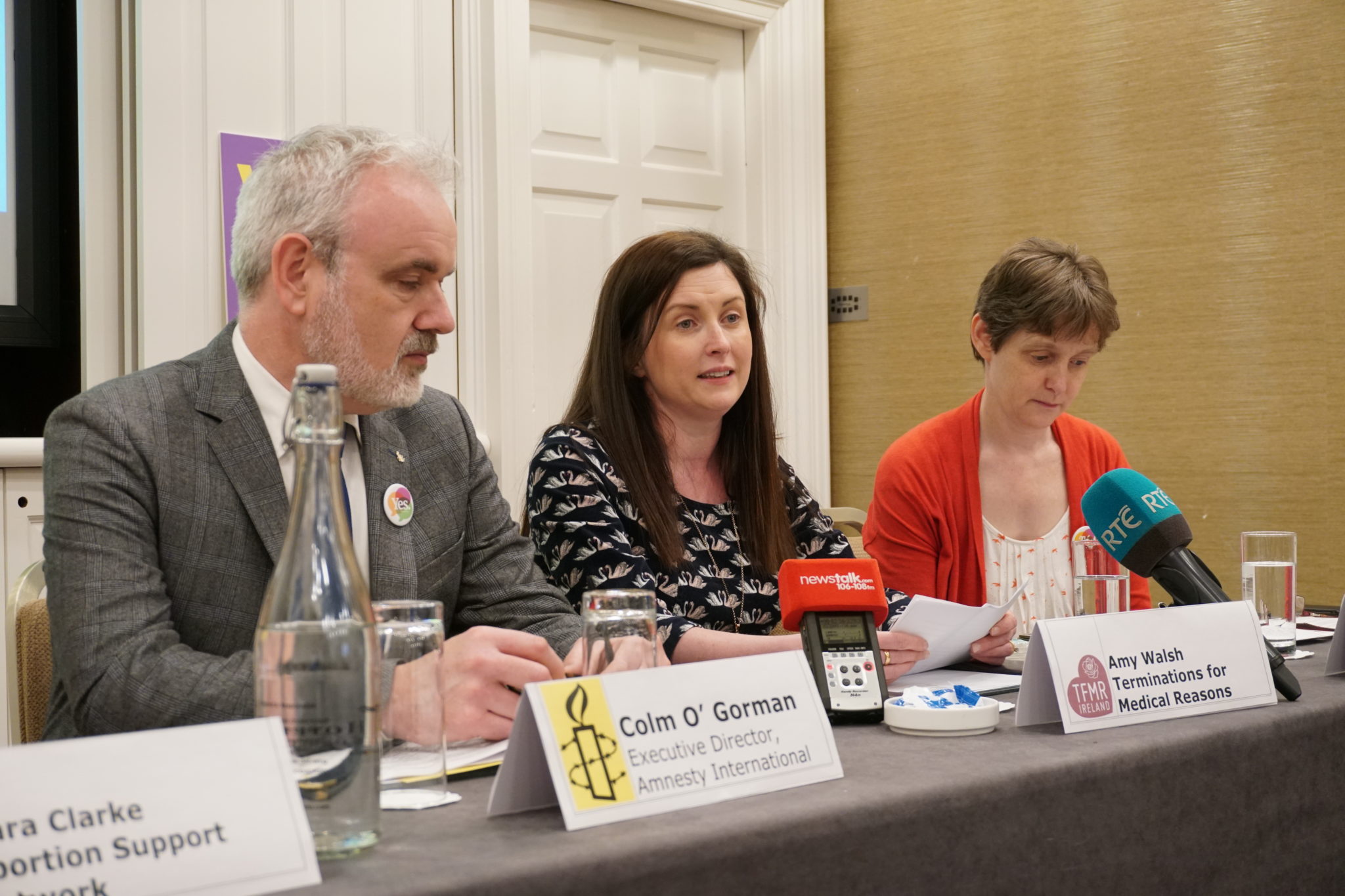 Being forced to travel abroad to access health services compounds and exacerbates the harm and distress suffered by women and girls under the Eighth Amendment. At a press conference in Buswells Hotel in Dublin today, Amnesty International threw a spotlight on the multiple layers of suffering inflicted on women and girls facing crisis pregnancies as a result of being exiled to other countries.

From the emotional and psychological distress of having to get essential health care in another country, to physical harm resulting from fear of seeking aftercare, economic hardship, and the stigma of being criminalised, the Eight Amendment hurts, harms and punishes women in a broad variety of ways.

Friday’s press conference, which came as part of Amnesty’s ‘It’s Time To Talk’ campaign for a Yes vote in the forthcoming referendum on repeal of the Eight Amendment, also featured the launch of the first in a series of issue papers on the human rights impacts imposed on women and girls by  obliging them to leave the country for abortion services.

Speaking at the event, Amy Walsh of Terminations for Medical Reasons, told her own story of being forced to travel to Liverpool after receiving the devastating news that the baby she was carrying had developed a fatal foetal abnormality called triploidy. “We desperately wanted our daughter, but the doctors explained to us that there was no possibility she would survive,” she said. “There’s no way to express the agony this caused us. We were also told that, if we wished to stay in the Irish hospital system and under its care, I would have to stay pregnant until our daughter died naturally. If her heart was still beating when I went into labour then the trauma of labour would cause her death. And even if it didn’t she would not be able to breath outside the womb as her lungs were so underdeveloped.

“My physical and mental health started to deteriorate – my blood pressure was rising and I was showing signs of early pre-eclampsia. The doctors told me that there was a chance this could become life-threatening.

“Rose Sophia was stillborn in Liverpool. I had wanted to bring her body home, so we could have a funeral service with family and friends and I had wanted my family to meet her. But she was so tiny and fragile we were told that she would probably not survive the journey home intact in the car and ferry. It was put to us that it would be more respectful to her to have her cremated in Liverpool.

“The Eight Amendment robbed us of the right to grieve for our daughter with our family. None of our family got to meet her and this made the whole experience and her loss so much worse. “

Also speaking at the press conference was Mara Clarke, Director of the UK-based charity Abortion Support Network (ASN). Ms Clarke explained the wide gamut of difficulty experienced by the women and girls who seek the support of the ASN because they are denied their healthcare rights in Ireland.

“With terrible regularity, women who are already extremely distressed are confronted with barriers and obstacles that cause suffering on a scale approaching trauma because of what would be a simple logistical issue if the clinics were local, such as an appointment being rescheduled.

“This has been going on for decades, and in nine years ASN has been around, I’ve personally spoken to hundreds of women and girls who feel completely trapped by the hurdles that can seem endless. These are ordinary people who have found themselves facing a crisis pregnancy, and have been further abandoned and cast out by their own country. People just don’t understand the challenges women face when being forced to travel, from not having childcare to having their treatment delayed because of circumstances outside their control.”

Dr Caitriona Henchion, Medical Director of the Irish Family Planning Association, spelled out the damaging impacts of being forced to travel abroad in such circumstances. “The denial of care in Ireland puts an extra burden on women at a vulnerable time. They are abandoned by the Irish healthcare system and this causes additional distress, anxiety, and risks to their health. As if all that weren’t enough, many women face serious economic hardship as a result of the whole ordeal.

“When abortion is criminalised, as it is in this country, the burden of accessing care falls entirely on the woman herself. The constitutional and legislative restrictions on abortion severely undermine the doctor-patient relationship.

“This continues after the procedure. Access to aftercare for women who have had terminations is essential. But having been forced outside the Irish healthcare system, there’s no obvious care pathway once they return home. The stigma attached to abortion because of its criminalisation also deters women from seeking care.”

Colm O’Gorman, Executive Director of Amnesty International Ireland, called on voters not to miss the once-in-a-generation opportunity to end this suffering on May 25. “Irish people want to see compassionate care provided to women and girls who need it,” he said. “Many of these women have already been subjected to severe physical and psychological harm – such is the case of victims of rape and incest – but thanks to the Eighth Amendment they are shamed, criminalised, and further traumatised.

“The question we need to ask ourselves is, if a women or girl is pregnant, and feels she cannot continue with that pregnancy, who decides what happens next? It’s time to care for women at home, and to respect their right to make decisions that are right for them and their families.”

Friday’s press conference was part of Amnesty’s ‘It’s Time To Talk’ campaign, which is supporting hundreds of thousands of people all around the country to get talking about the key issues in the referendum debate. To find out more about the campaign visit: www.itstime.ie