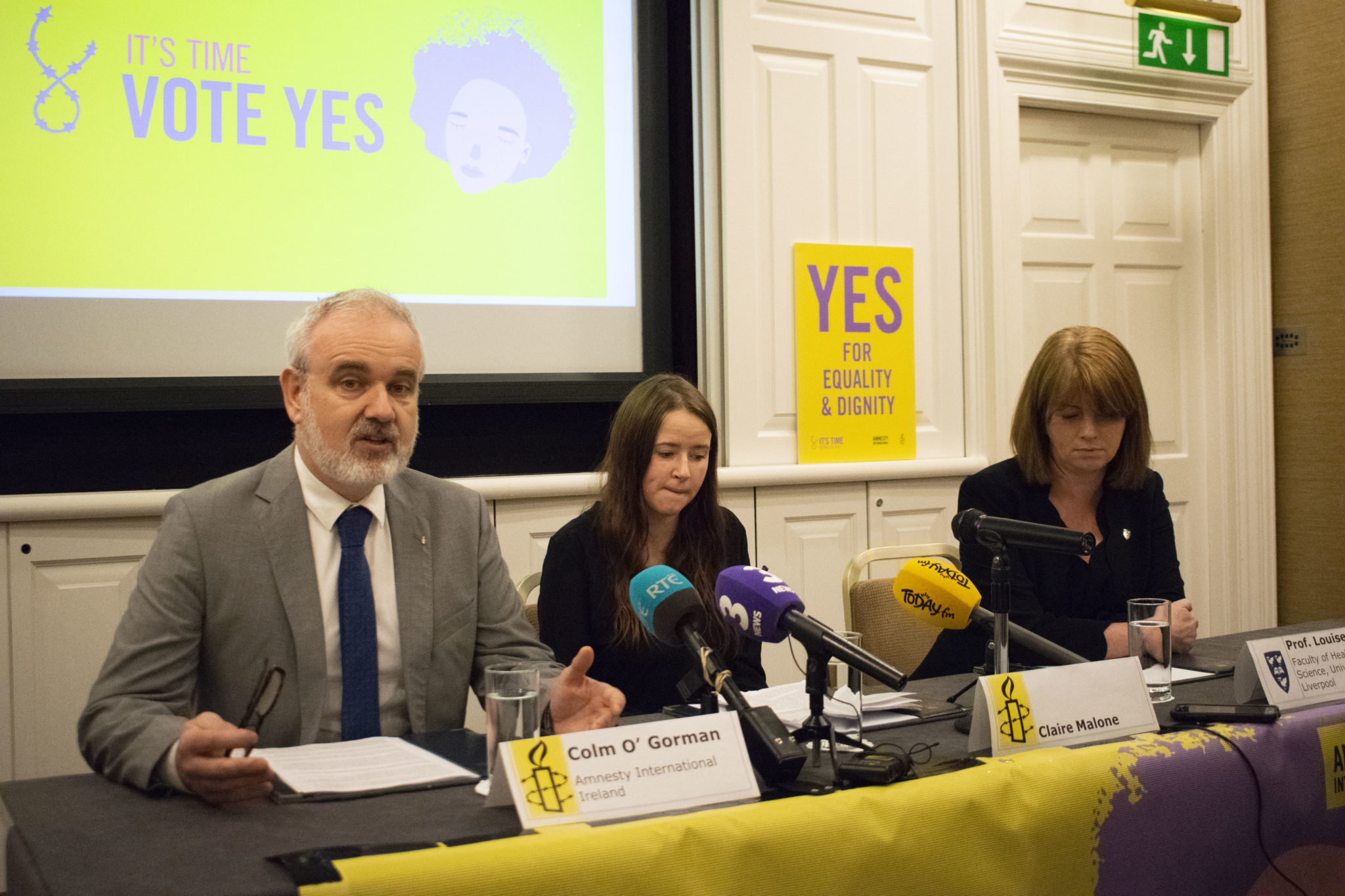 Amnesty International Ireland today challenged those lying to the public by claiming that the Eighth amendment does not pose a risk to the health of pregnant women and girls. It called for the public to be told the truth; that when it is the pregnancy that is seriously endangering women’s health, doctors are utterly powerless to intervene. Women are forced to continue with pregnancies no matter how serious, irreparable or life-limiting the impact on their health.

At a press conference in Dublin today, Amnesty International was joined by Claire Malone, a young woman and mother whose recent experience shows the reality of the harmful and brutal effects of Eighth Amendment. Also speaking was Professor Louise Kenny, a consultant obstetrician and gynaecologist and professor of obstetrics.

At the press conference, Claire Malone presented her harrowing personal testimony. Claire has a number of complex and life-threatening health conditions, including pulmonary atresia and pulmonary hypertension and had her lung removed in 2014. If women with pulmonary hypertension become pregnant, they are at high risk of becoming even more gravely ill or dying in pregnancy. Claire knows this, which is what led her to seek an early stage termination.

Claire Malone spoke of finding out she was pregnant and realising she could potentially die if she continued with the pregnancy, alongside the long-term detrimental effects on her already fragile health.

“I was told by my doctors that the pregnancy wasn’t affecting my health at that stage, when I was 7 weeks pregnant. But anyone can look up pulmonary hypertension and pregnancy, and see the words mortality, high-risk and heart failure. So I asked, what are my options right now when we know what’s going to happen? My doctors said they couldn’t offer a termination as my life wasn’t at risk right now, and that was it. I know they are bound by the law. But I felt like if I waited until my health got so bad that I could die, then it would be too late by then anyway. And why is a risk to my health, as bad as it already was, not enough? How much do I have to go through before my doctors are allowed to treat me?

“I was told I could go to the UK for a termination but I would have to refer myself to the clinics. But going to the UK became impossible for me. My doctors were not legally able to consult with the doctors in the UK if I was having a termination, and the doctors over there said my health conditions were too complex and risky without the full support of my teams in Ireland. I needed medical support to physically travel. My options were to go to the UK on my own, lie about my health and risk my life, or continue the pregnancy in Ireland with all that meant.

“I have two boys, who lost their father two years ago,” she said. “If I could have safely continued with the pregnancy, then I wanted to, but I needed to protect the children I already had who’d been through so much. They had seen me in and out of hospital for years, and they knew what was happening. They asked me outright, ‘are you going to die?’ I told them I had to do everything the doctors said and it would be okay, but it got to the point where I had to prepare them for the worst. I had to prepare for it myself. I went into labour believing I was going to die.”

Also speaking at the press conference was Professor Louise Kenny, Pro-Vice Chancellor of the Faculty of Health and Life Sciences, University of Liverpool. Professor Kenny is a professor of obstetrics and a consultant obstetrician and gynaecologist.  Professor Kenny outlined how the Eighth Amendment denies healthcare in line with best medical practice to women and girls in Ireland, especially in complex cases such as Claire’s. She also spoke about why the medical profession needs the Eighth Amendment to be repealed if they are to protect the health of pregnant people.

“The Eighth Amendment does not allow Irish doctors to treat pregnant women with complex health issues, in line with medical best practice. Claire’s recent pregnancy highlights this fundamental problem. Claire has a heart condition which can be significantly worsened by pregnancy. The risk increases in the second half of pregnancy. When Claire first requested a termination of pregnancy, there was no ‘substantial risk’ to her life. Under the Eighth Amendment, Claire’s doctors could not perform a termination in early pregnancy when it was safe to do so – in line with her decision – as they would be committing a serious criminal offence,” said Professor Kenny.

“Obtaining a termination in the UK is not easy but is exceptionally difficult for women with complex medical conditions. Because of the Eighth Amendment, Irish doctors cannot formally refer women. They can only provide information. And contrary to best practice, women often travel without their full medical history being available to the team in the UK, significantly increasing the risk. If a doctor assists a woman by referring her to a UK-based hospital or clinic, they have committed an offence. If they engage with or consult with a doctor the woman herself identifies in order to ensure she can safely access abortion there, they have committed an offense.

“Claire could not travel and had no option but to continue, thereby risking her life. The outcome of cardiac disease in pregnancy can be difficult to predict. In Claire’s case, despite her deteriorating significantly, exceptional care from her cardiology and obstetric team resulted in a live birth. However, there is no doubt that she was exposed to a very real risk to her health, against her wishes and because of the Eight Amendment. It is categorically incorrect to say that the Eighth Amendment does not adversely affect health outcomes. Claire was forced to risk everything.”

Colm O’Gorman, Executive Director of Amnesty International Ireland, directly challenged those who have been saying that the Eighth Amendment doesn’t harm the health of women and girls in Ireland.

“It’s a lie to say doctors can always safely treat women in Ireland under the Eighth Amendment. Because of the Eighth Amendment, termination is lawful only where a women or girl might die from her pregnancy. In all other circumstances and no matter how serious, irreparable or life-limiting the damage the pregnancy poses to her health, she is forced to continue. The Protection of Life During Pregnancy Act offers no comfort to women like Claire, whose pregnancies will reach a point where they cannot be safely terminated. It also means women with complex health needs, like Claire, cannot just join the thousands of women travelling overseas for abortion care. Nor should they have to. The Eighth Amendment forces women to make impossible choices, about their health, their lives and their families.

“We have Claire who can speak from her own experience. But there are countless other women who have suffered horrifically. We have so many expert and experienced voices from the medical profession in Ireland agreeing. What will it take for those opposed to repealing the Eighth Amendment to stop misleading the public?

“The government wants to include a risk to health ground in Irish abortion law. But this cannot happen while the Eighth Amendment remains. If people do not vote Yes on May 25, we will have lost a once-in-a-generation opportunity to create a legal and medical framework to protect the health and lives of women and girls in Ireland,” said Colm O’Gorman.

“Claire’s case shows that that line between grave risk to health and the risk of death is not clear-cut, and doctors are placed in impossible situations. We need to ask ourselves; is ‘averting death’ really the healthcare standard we want in Ireland? Unless the Eighth Amendment is repealed, this is what healthcare in Ireland will continue to look like for women and girls at the moment when they need our care and compassion the most.”

Download our Key Issue Paper on the harm to health under the 8th Amendment.