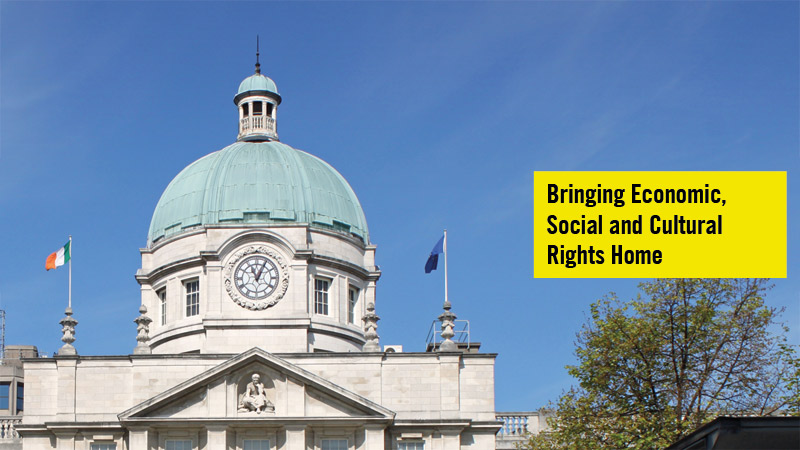 Amnesty International Ireland has today broadly welcomed a Government decision to refer the March 2014 report of its Constitutional Convention on economic, social and cultural (ESC) rights to an Oireachtas Committee. In February 2014, the convention voted by an overwhelming majority (85 per cent) to recommend that the Government strengthen the protection of ESC rights, including the right to health, housing and fair working conditions, in our Constitution.

“Amnesty International broadly welcomes the decision reported by the Government to Dáil Éireann today. We would have preferred a clearer acceptance in principle of the Convention’s recommendation that ESC rights be strengthened in the Constitution. However, Amnesty has always recognised that further deliberation on this complex issue would likely be required. We are conscious that a sizeable minority (43%) of Convention members voted that this recommendation be referred elsewhere for further consideration. Our advice to the Government had been that any further process be open and transparent, involve experts from civil society and academia, and have a clear timeframe. We hope the Oireachtas Committee process will meet these criteria,” said Colm O’Gorman, Executive Director of Amnesty International Ireland.

“Amnesty is very disappointed, however, that having taken 22 months to consider this report and respond, there is little of substance in the Government’s statement to the Dáil. It is troubling that myths and misinterpretations about ESC rights dealt with by the Constitutional Convention were again aired in the Government’s response.  In May 2014, Amnesty International published Bringing ESC Rights Home to help inform the Government’s consideration of the Convention report. It details how concerns around costs of implementing these rights, and the proper role of the judiciary in deciding on resource allocation can be resolved. The report further sets out many international examples of states providing for ESC rights in their constitutions without incurring the sort of problems cited by the Government today.

Amnesty is very disappointed, however, that having taken 22 months to consider this report and respond, there is little of substance in the Government’s statement to the Dáil

“Ireland needs a Constitution that protects ESC rights and provides decision-makers and politicians with an objective, legally sound framework with which to make better, evidence-based decisions. The Convention’s recommendation also represents the clear desire of people in Ireland that the Government protect ESC rights in their Constitution. We hope this Oireachtas Committee process is commenced as a matter of priority,” said Colm O’Gorman.

“Human rights like housing, healthcare, education and social welfare are obviously of critical importance to every person living in Ireland. When we look at past failures in areas such as homelessness and hospital waiting times, it is clear that we need real change. The Constitutional Convention recognised that; now we need government to act upon their recommendation.”

An Amnesty International/Red C poll in February 2014 found that 71 per cent supported a constitutional amendment to protect human rights like the right to health, housing and an adequate standard of living. 81 per cent of respondents agreed that decision-making and expenditure ought to be based on protecting these rights.