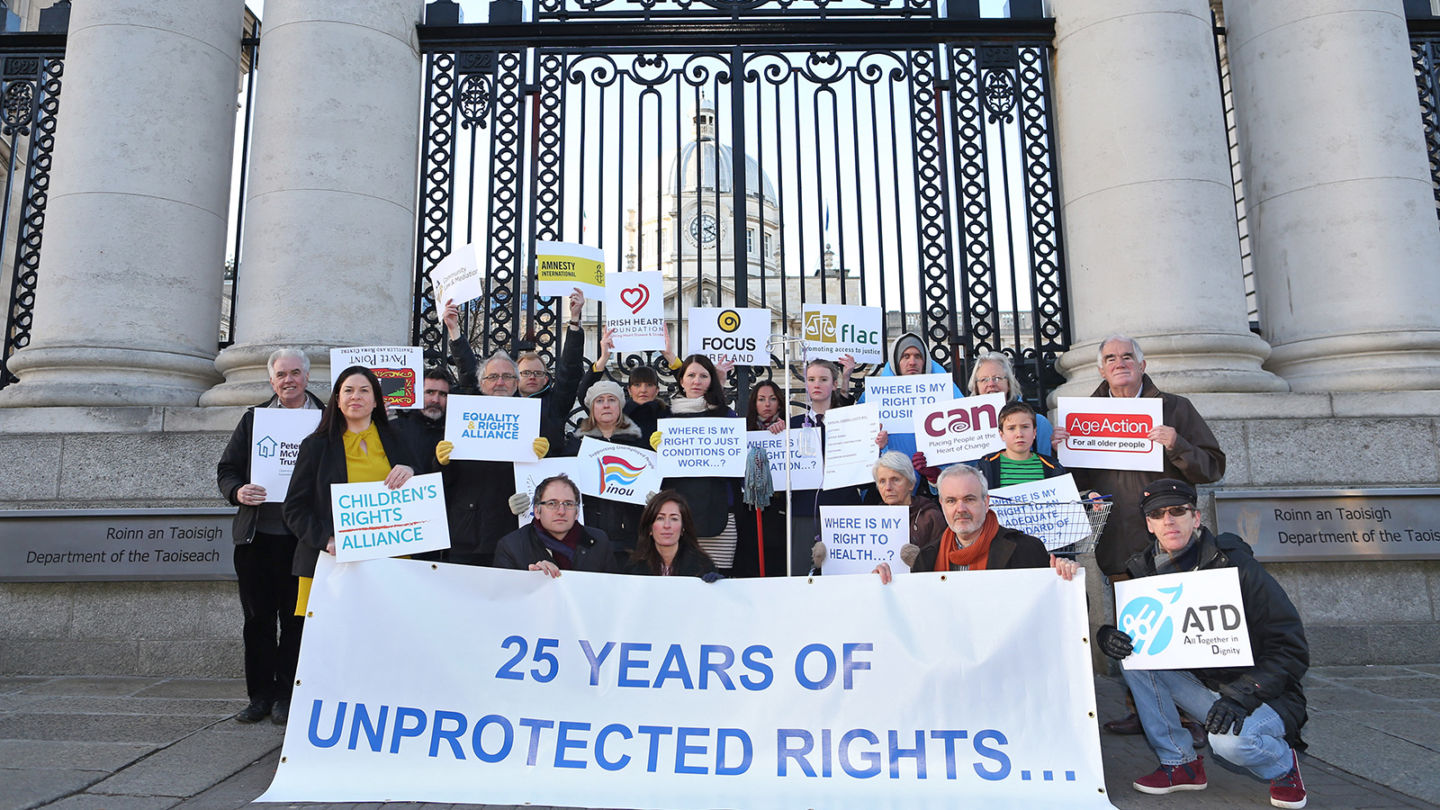 •        Concern regarding protection of economic, social and cultural rights

Amnesty International Ireland today welcomed the new programme for government commitment to establish a Citizens’ Assembly, which amongst other issues will make recommendations to Dáil Éireann on the Eighth Amendment to the Constitution. It also expressed concern at the apparent watering down of the Constitutional Convention’s March 2014 report recommending strengthened constitutional protection of economic, social and cultural (ESC) rights, and of its commitment to implementing reforms to the direction provision system agreed last year. More generally, it called for human rights to be central to the new government’s domestic and foreign policy when implementing “A Programme for a Partnership Government ”.

“Today’s roadmap for the new government has some welcome commitments, including finally progressing constitutional referenda on removing the offence of blasphemy from the Constitution and amending its provisions on women’s ‘life within the home’. However, we urge that human rights will be core to Ireland’s domestic and foreign policy in the lifetime of the new government. We need commitments to quickly ratify the many outstanding human rights treaties Ireland has signed. Ireland’s response to the recommendations made by other UN member states on its human rights record yesterday during its second Universal Periodic Review will be very telling,” said Colm O’Gorman, Executive Director of Amnesty International Ireland.

Citizens’ Assembly:
On the Eighth Amendment, Amnesty International considers putting this to a Citizens’ Assembly a potentially welcome step, but only if begun immediately and in good faith. It must not be a delaying tactic, it cautioned.

“It is beyond question that the Eighth Amendment has to be repealed. Ireland’s Constitution is no excuse for the human rights violations inflicted on women and girls every day. The last government was repeatedly told this by the UN human rights treaty bodies elected by states, including Ireland, to monitor the implementation of international human rights law,” said Colm O’Gorman.

“Even though an independent Red C poll we commissioned, found that the vast majority of people in Ireland want the Eighth Amendment repealed, it has been decided that the issue requires further deliberation by a Citizens’ Assembly. This is still progress, but only if not simply a means to further delay realising women’s human rights. The Assembly’s terms of reference must be published at the earliest opportunity. Fine Gael must live up to its programme for government commitment to establish this Assembly within six months.   The Assembly’s Eighth Amendment deliberations must start promptly, in a process that is open and transparent. It must involve consultations with experts, including from civil society and academia – from here in Ireland and internationally. Very importantly, Ireland’s obligations to women and girls under international human rights law must be one of the Assembly’s key benchmarks.

“It must also have a clear and prompt timeframe for reporting, and a government commitment to follow-through. This government must take note of the immense disappointment at how few recommendations from the Constitutional Convention process established by the last government were acted upon.

“Our Red C poll found that abortion is no longer a divisive issue, and that the vast majority (87%) of people in Ireland, across all regions, demographics and social groups, want access to abortion expanded. A mere 7% are happy with the status quo. Of the 5% of people who personally oppose abortion in all circumstances, half said they would still vote to repeal the Eighth Amendment. Most significantly, an overwhelming majority (80%) would vote to repeal the Eighth Amendment, either outright or if certain restrictions were put in place.

“It is interesting to see the detail reported of the Fine Gael – Fianna Fáil ‘Agreement on Water Services’ regarding the process and timeframe for the proposed Expert Commission and Special Oireachtas Committee on the Funding of Domestic Water Services. We very much hope this issue is taken as seriously. Since the election, at least 800 women and girls have travelled to the UK to access a health service that should be available to them at home, as is their human right.”

“We are very troubled at the apparent watering down of the Constitutional Convention’s recommendations on economic, social and cultural rights in the programme for government. In its March 2014 report, the Constitutional Convention, by overwhelming majority, called for enhanced constitutional status for all of these rights, not just the right to housing. Then, having taken 22 months to consider that report, the last government’s statement to the Dáil in January included no clear acceptance of its recommendations nor anything else of substance other than referring the matter to an Oireachtas committee. Now we see the Convention’s recommendations being presented as much narrower. The Convention recommended not just that the government duty of ‘progressive realisation’ be recognisable by the courts, but that it be given a constitutional basis. It did not recommend that only ‘specific additional rights on housing’ be inserted into the Constitution. It recommended that all the rights in the International Covenant on Economic, Social and Cultural Rights be constitutionally enshrined. Yet this dilution is what the programme for government says will go to the newly established Oireachtas Committee on Housing for further consideration.

“We earnestly hope that the incoming Government is not seriously suggesting that giving constitutional status to economic, social and cultural rights beyond housing will not be considered. This would be an affront not only to all those who participated on and engaged with the Convention. These are vitally important rights for people in Ireland, like the right to health or an adequate standard of living. A Red C Poll we commissioned in February 2014 found that 71% of people are in favour of amending the Constitution to protect these rights. We need urgent assurance on this,” said Colm O’Gorman.

Refugees and asylum seekers:
“In this programme, the new government has committed ‘to reforming the direct provision system, with particular focus on families and children’. However, in the draft programme, it said it ‘will seek to implement the recommendations of the McMahon Report as swiftly as possible’. We are alarmed that this language is now gone. The government must explain its position, and recommit to implementing the recommendations made in 2015 by the working group established by the last government.

Citizen’s Assembly:
The Amnesty International/Red C Research & Marketing poll on attitudes to abortion in Ireland was conducted in February 2016. Its complete findings are available here: http://bit.ly/NotACriminalPoll

Economic, social and cultural rights (ESC rights):
In relation to the March 2014 report of the Constitutional Convention, the “Partnership Government Programme” states:

“The eighth report of the constitutional convention on economic, social and cultural rights recommended that the State progressively realise economic, social and cultural rights subject to maximum available resources, that this duty be recognisable by the courts, and that specific additional rights on housing be inserted into the Constitution. Due to the substantial questions raised on the balance of rights, proper governance and resources we will refer this report to the new Oireachtas Committee on Housing for consideration.”

The recommendations from the Constitutional Convention are available on page six at:http://buff.ly/1OaC0q9 (PDF)

85 per cent of the Convention supported greater constitutional protection of economic, social and cultural rights. The majority supported insertion into the Constitution of a provision that the state shall progressively realise ESC rights, subject to maximum available resources and that this duty is cognisable by the Courts. On “specific additional rights that should be enumerated in the Constitution”, 84% said ‘housing’. However, 80% supported specific inclusion of all the rights contained in the International Covenant on Economic, Social and Cultural Rights. In addition, 90% said ‘rights of people with disabilities’ should be included, 87% ‘essential health care’, 78% ‘social security’ and  75% ‘linguistic and cultural rights’.