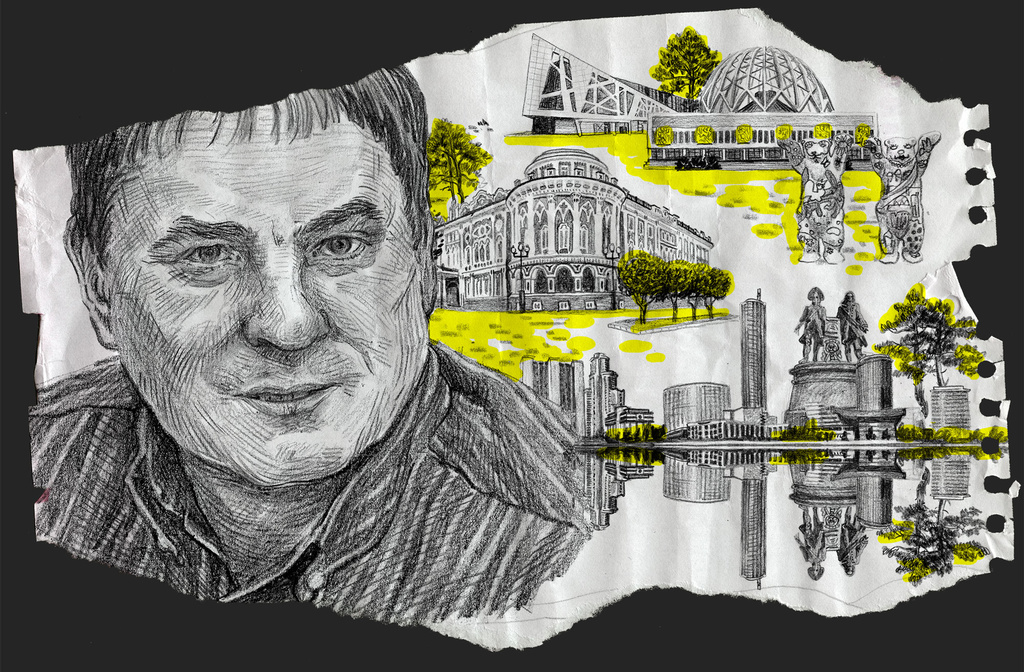 Aleksey’s became a human rights defender after he was imprisoned for seven years, after being beaten and forced to “confess”. He began providing legal assistance to prisoners and was imprisoned for a second time because of this. In his home city, the prison facilities where torture and abuse are ongoing is opposite the Arena where the World Cup matches will take place.

“I was born and raised in Yekaterinburg. This is my home city.

Opposite the Yekaterinburg Arena, where World Cup matches will be held, is a pre-trial detention centre, and behind it, there’s the IK-2 prison where horrific acts of torture and abuse took place. This prison was the subject of a documentary film titled Torture Factory, or Educational Experience I produced. The film shows how the prison administration truly break inmates and all too often people sustain injuries for life. Some individuals, along with Mikhail Belousov, the deputy head of IK-2 who tortured and raped prisoners, were convicted in 2017. However, we are still receiving reports of torture and other ill-treatment continuing within this prison.

My human rights work began while I was in prison. In the 1990s I operated a business. I picked up an initial batch of sports clothing to sell, and when I returned for the second batch, the police were waiting for me. I was arrested and beaten for 10 days, to make me “confess” to a crime. In court, I tried to draw the judge’s attention to the fact that I was not identified by the aggrieved party; that the fingerprints on the sawn-off shotgun, that I had allegedly brought, did not belong to me; and that I was already detained on the date that eye witnesses suggested that I had brought the shotgun. This was all in vain. I was convicted and sentenced to seven years in prison. Immediately after the conviction, I started sending complaints about the sentence and the actions of the prison staff. After each complaint, I was visited in the evening and told: “That’s it, we are transferring you to the disciplinary cell”. My complaints simply disappeared and they continued to hold me in the disciplinary cell in solitary confinement. At that time I realised that the purpose of prisons in Russia is not to reform prisoners, but to break them.

After my release, I found a job, started a family and began to provide legal assistance to prisoners. In 2005 I registered an organisation called Legal Basis. In 2008, I investigated the killing of prisoners in Chelyabinsk Penal Colony No.1, in Kopeisk. As a result, criminal proceedings were started against prison wardens and in the first few days of the criminal investigation seven prison staff were arrested. Subsequently, another group of members of the Federal Penal Service have been arrested. All of them have been convicted and sentenced to prison terms.

However, I was again in prison when I heard the news. It was the second time I was imprisoned but this time, it was for my human rights work. Before I was arrested, prisoners had told me about demands from staff to give any “confession”, as long as it mentioned my name. They found the right people for this; they suddenly remembered that I had allegedly committed a crime in 2004. One morning, in May of 2009, I was arrested while out with my little daughter. I was sentenced to five years in prison. Later the term was reduced to three years on appeal. It was only in November 2017 that the European Court of Human Rights heard my complaint. The Court found that I was unlawfully arrested; unlawfully held in custody; was denied an opportunity to say goodbye to my parents, who died while I was in prison; and was sent to another region to serve my sentence, in violation of national law. But this was after my sentence had been served.

On my release from prison, I met up with my colleagues and we resumed our human rights work. We made a great team that visited penal institutions. Last year we had 15 members and covered the whole of Sverdlovsk Region. Have we made any difference? Yes! In four to five years we managed to achieve a fundamental change, and some difficult issues are now easier to deal with. There are practically no more deaths in our penal colonies. The latest case involved a prisoner whom the head of the penal institution had beaten to death. The prison administration tried to cover it up, but they failed due to our immediate involvement. We moved to live near the colony, literally spending nights there to get to the bottom of the case. A criminal investigation was instigated and those responsible were sentenced to long prison terms.

In 2015, Legal Basis was listed as a “foreign agent” because we receive funding from abroad to “influence the policies” in our country. It turned out that the proof of our “influence” was the fact that I stood outside the Public Council of the Federal Penal Service with a slogan stating “No to torture”. We were fined hundreds of thousands of roubles.  Today we work as a pressure group, mostly on a voluntary basis.