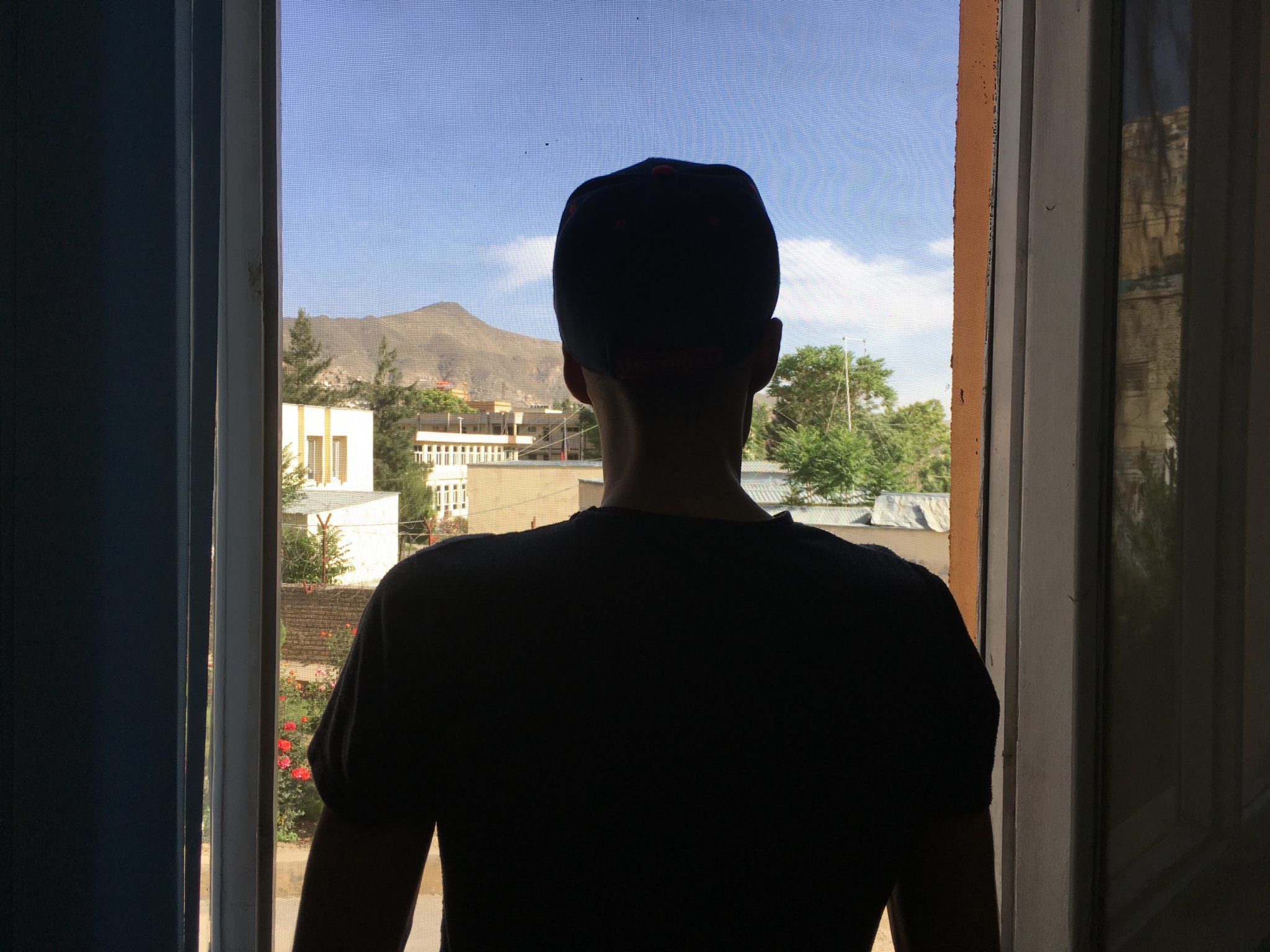 Azad survived the perilous journey from Afghanistan to Europe once. Never in his worst nightmares did he imagine he’d have to make the same trip again

Miranda first met Azad three years after he arrived in the Netherlands. She was working with a local organization which supports unaccompanied minors, and straight away was struck by how curious Azad was. “He was always very interested in other peoples’ stories, talking with people on the streets,” she recalls, smiling. “He made a lot of jokes.”

Azad, who was born in Afghanistan, had spent most of his life on the move in search of safety. In the early 2000s, he was forced to flee his home country to Iran, along with his mother and brother, after the Taliban killed his father.

The family were unable to get legal status in Iran which meant the boys couldn’t go to school, so, desperate to give her sons a better future, Azad’s mother decided to take the dangerous route from Turkey to reach Europe. Tragically she died during the crossing, and her sons reached the Greek island of Lesvos alone in 2010.

Despite managing to reach the Netherlands along with his brother in 2011, Azad is once again back on Lesvos, trapped in a vicious circle by Europe’s cruel policies.

When Miranda first met Azad in a school running classes to empower young asylum-seekers, he was still deeply traumatized and getting closer was difficult. Miranda says she felt Azad was initially testing her to see how much he could trust her.

One day Miranda had planned to meet Azad after class, but the class had been cancelled. She decided to visit him anyway, travelling with a bag of groceries to his home two hours away. Miranda views this as a turning point in their relationship. “He told me he felt like his mother was coming to take care of him”, she says, her eyes sparkling. But she adds:

“He will only ask for help when he’s desperate. He doesn’t want our relationship to be based on help. The most important thing for him is to know that I’m always there for him, even if I don’t agree with him.”

While his younger brother received a permit soon after their arrival in the Netherlands, Azad was left in limbo for six years. Azad is gay, which makes Afghanistan extra dangerous for him. Same-sex relations are criminalized in Afghanistan and gay men suffer from horrendous discrimination and violence. Despite his vulnerability and the fact that he had lived in the Netherlands for six years, the Dutch authorities decided to return Azad to Afghanistan in 2017. They put him in a detention centre while he awaited deportation.

A period of mourning

Miranda didn’t even get to say goodbye in person before Azad got deported, as he was kept in isolation for fear that he could do self-harm or have violent reactions. He was just allowed to call her on the phone: he shared with Miranda how extremely scared he was of returning to Afghanistan. Miranda was afraid he was going to commit suicide, and her fear nearly came true: the night before his deportation, Azad tried to cut his throat with broken glass. It wasn’t sharp enough, so he tried to swallow it. The security guards stopped him.

Miranda describes the days and weeks after Azad’s deportation as “a period of mourning”.  Azad was able to call her from a shelter in Kabul, run by the International Organisation for Migration (IOM), where he was staying. He said the security men there warned him not to go out because it was too dangerous. Just a few days after Azad arrived in Kabul he saw huge clouds of smoke from his window: the German embassy had been bombed. Then there was a shooting in front of the IOM shelter, which meant Azad no longer felt safe there, and for the next few months he was always on the move.  He was sometimes able to rent rooms in people’s houses, but often the Taliban or other men came knocking on the door, asking questions about him.

“Azad looked like a stranger to people there,” Miranda explains.

He still had holes in his ears, from piercings he got in the Netherlands, and this drew a lot of attention. Other people noticed his accent and thought he was from Iran. People could tell he was different.

Azad’s fear was also fuelled by the fact that his family belongs to the Shiite religious minority. Over the past couple of years Shiites in Afghanistan have been increasingly targeted by the Taliban and the armed group calling itself Islamic State. Azad told Miranda that he had read an article about a Shiite family who had been attacked and had their heads cut off and felt that he would never be safe. With no possibility to start a life in Afghanistan, he fled again to Iran. There he found a job in a shoe factory, where he slept under his desk. After a few days of work, his hands were covered in blisters. Miranda received pictures of him on her phone: “He couldn’t move his hands. He couldn’t even drink a cup of tea.”

Iran was sending Afghans back every month and Azad knew that, once again, he had no future there. Continuing his search for safety, Azad travelled on to Turkey. But there was more danger here – just after he passed the border, traffickers took Azad and the other men in his group and locked them up. Miranda says:

“They let him call me to ask for money. They had beaten him up.”

After a week Azad managed to escape – and the next time Miranda heard from him, he was in Greece.

The Moria camp: trapped once again

A volunteer from an NGO called Euro Relief telephoned Miranda to say that Azad was safe and staying in Moria camp in Lesvos. She was relieved and worried at the same time. The conditions in Moria camp have deteriorated since last summer, with rising levels of violence, including sexual violence, and a dire need for medical and psycho-social care. Sometime later, Azad called Miranda and said he had been stabbed with a nife in the camp. He was not only in danger because of his Shiite background and the fact that he’s gay, but also because he converted to Christianity in the Netherlands.

Fearful for his safety, Azad left the camp and is now staying on Lesvos without any shelter. He has no idea when he’ll be able to leave the island, or if he will be granted asylum in Greece. This is different to Azad’s first trip to Europe – this time he has been caught up in the deal between the European Union and Turkey, which has left many asylum-seekers trapped on Lesvos for years.

“His situation has been so bad for so long. That’s why it’s urgent to help him. I didn’t expect him to manage to go through the dangerous journey again to get to Europe.”

Staying positive is a big challenge. She understands that some people feel tired or powerless if they hear about the situation on the Greek islands, or in Afghanistan.

“But helping someone doesn’t have to be doing practical things, like collecting stuff. Your attention and just seeing or talking to someone, to treat them as a person, makes a real difference.”

When Azad is feeling down, and he doesn’t want to pick up his phone, Miranda sends him a voice message or a picture, sometimes with her daughter. That’s how he “recharges his batteries”. He told Miranda: “when I speak with you, for the whole day I feel happy and I feel I can really make it.”

Europe: why are you sending people to danger?

Miranda cannot understand why the Netherlands and other European countries are sending Afghans back to danger. “Even the UN says that Afghanistan is not a safe country. The situation is really bad and getting worse. The conflict in Afghanistan has been going on for such a long time, the world bears a responsibility towards Afghans.” She adds: “In the end it’s about compassion. If this would happen to us, what would we want other people to do?”.

How does she see Azad’s future?

“If he gets a permit to stay in Greece, the whole story starts again. And even if one day he gets a permit in the Netherlands, it will be difficult. He has been waiting for such a long time, in a period of your life where most young people are starting their lives. But he’s also very strong, people like him quickly. He’s good with technical things. Maybe he can start a technical training.”

Azad should not be trapped in this nightmare, constantly running from one threat to the next. It is high time that Europe takes responsibility and frees Azad, and many others like him, from this vicious circle by giving the protection they need and stop sending them to danger.