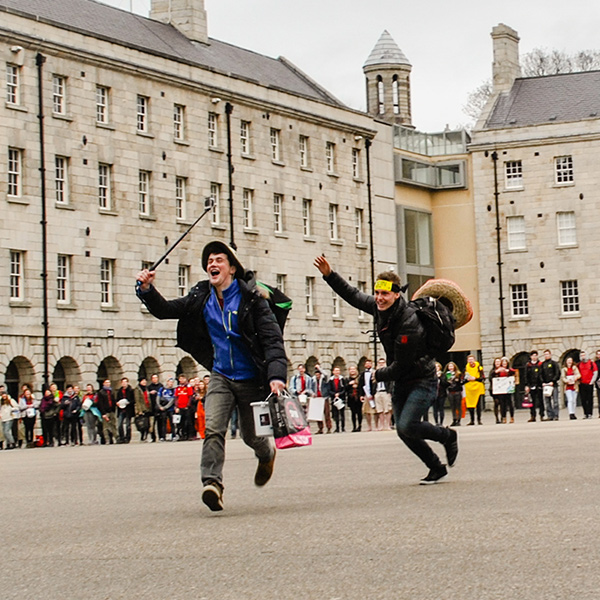 More than 170 students race around the world in charity adventure

This weekend, 170 third level students will take part in the iconic Jailbreak race, with the competition starting at 9am on Saturday, 10 March from Dublin Castle. In teams of two, the students will have 36 hours to travel to a mystery location somewhere in the world without spending any of their own money. Throughout the competition, the students are given a series of clues which guide them toward a particular destination. The first team to arrive there will be declared the Jailbreak champions for 2018.

Jailbreak is Ireland’s largest student-run charity challenge. All funds raised are split equally between Amnesty International Ireland and the Society of St. Vincent de Paul. Originating in Trinity College, Jailbreak has now expanded to 10 third level institutions. Over the past five years, it has raised €225,000 for the two partner charities. This year, the students have set an ambitious target to raise €50,000.  Throughout their travels, the students will be highlighting Amnesty’s Brave campaign which seeks to protect the work of human rights defenders and civil society organisations around the world.

“Now in its sixth year, we are delighted that Jailbreak continues to attract such fantastic support from Irish students. This year, participants will have 36 hours to beg, borrow and blag their way to the secret location. The students are also raising awareness of our Brave campaign which seeks to protect human rights defenders and civil society organisations around the world. In the face of a global assault on human rights, we need human rights defenders now more than ever. They’re brave enough to speak up for what matters and to hold leaders to account. We must stand up for those who protect the human rights of others. The money and awareness raised by the students and their supporters will play an important role in this global campaign,” said Colm O’Gorman, Executive Director of Amnesty International Ireland.

St Vincent de Paul’s college groups take part in social action and volunteering in their colleges and local communities based on the needs that the students themselves feel need to be addressed.  They work to advance St Vincent de Paul’s social justice mission, by tackling poverty in all forms and providing support and friendship to those who need it most.

“We are very grateful to the dedicated group of students who have put an enormous amount of work into organising this year’s Jailbreak event. As a parent who has had experience of the excitement of the event I understand and appreciate the effort of all involved. Their commitment, creativity and energy speaks volumes and we have no doubt the rewards will follow with another successful event. We are also thankful to all those students participating, who have and will continue to raise funds over the course of the event. The funds raised support SVP College Conferences (groups) throughout their annual programme of activities, through which student volunteers are making a difference and increasing awareness of social justice issues.  We wish everyone taking part the best of luck on their travels and as in previous years look forward to everyone arriving home safely,” said Kieran Stafford, SVP National President.

Representatives from Amnesty International, the Society of St Vincent de Paul and a number of students who’ll be participating in this year’s race are available for interview.

Jailbreak raises much needed funds for Amnesty International Ireland and the society of St Vincent de Paul in a number of ways:

Amnesty International is a global movement of more than 7 million people in over 150 countries and territories who campaign to end abuses of human rights. Amnesty International Ireland has 18,000 members and supporters who fight injustice in Ireland and around the world.

The Society of St. Vincent de Paul (SVP) fights poverty in all its forms through practical assistance directly to people in need. With 11,000 volunteers in Ireland they offer personal, non-judgmental assistance that is based on the need of the individual or family.