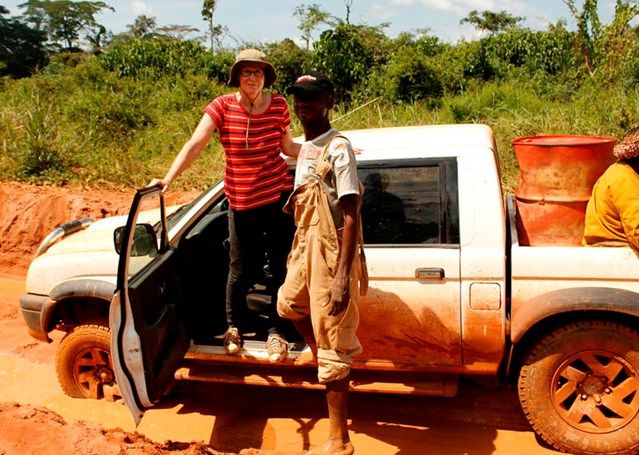 10 ways you help us respond to a crisis

During war and conflict, crisis researcher Joanne Mariner is the first on the ground to gather evidence of serious human rights crimes. She tells us how your support makes her life-changing work possible.

“I’ve had training in first aid, facing hostile fire, and dealing with hostage situations. I’ve seen how high velocity bullets can penetrate steel. But being prepared is much more about experience than training.”

“First of all, I buy a good, detailed map! Then I read everything that has been published about the country – from Amnesty, other human rights organisations, the UN, and the press.”

“I’ll bring a first aid kit, anti-malaria drugs, and satellite phone, local phone and UK phone, as communications are so important. I’ll also pack a still camera, video camera, and a GPS tracker so colleagues can track my location.”

“I talk with a lot of people on the ground to work out where not to go, what roads to avoid, when to travel. For example, they might tell us not to drive a particular type of car as it’s a favourite for car-jacking. In some situations, there are serious risks – of getting shot, hit by a mortar, kidnapped, killed…”

“In some countries, for example the Central African Republic, I usually just travel with a driver. Often the roads outside major towns can be terrible so we use a four-wheel drive. I’ve been in a few difficult situations because there can be robbers on the road, and it can be scary.”

“We always get first-hand testimony. After a massacre, you have an obligation to document exactly what happened. I ask people to detail the circumstances, the basic who, what, when and where. ‘What did you see?’ ‘What were they wearing?’ ‘Who was shooting?’”

“We don’t repeat rumours, we get testimonial, written documentation and forensic evidence. We go to the place something happened and take photographs of bodies, bullets and shrapnel, and other physical evidence. Some of the photos you can’t even look at; we don’t publish those, but keep them as proof.”

“We describe exactly what happened, characterize and analyse the crimes that have been committed, and make recommendations for reform. We’re not criminal investigators, but we’re just as rigorous. Our goal is to provide real-time documentation, to hold people to account and get justice for the victims.”

Our goal is to provide real-time documentation, to hold people to account and get justice for victims.

“In breaking news situations, we’ll tweet out news, speak with journalists, put out press releases, and write blogs, opinion pieces and briefing papers. It’s so important to show the world what’s going on and create pressure on governments to act.”

“We put in a huge effort to ensure our recommendations for reform are enacted. We meet with UN and government officials across the world to explain the need for urgent action.”