Every day, people are executed by the state as punishment for crimes

In some countries, you can be sentenced to death for acts that should never be criminalised, like homosexuality. In others, it is reserved for acts of terror and murder. Some countries even execute people who were under 18 years old when the crime was committed.

The death penalty is cruel, inhuman and degrading. Amnesty opposes the death penalty at all times – regardless of who is accused, the crime, guilt or innocence or method of execution.

For 40 years, we have been working to end executions. When we began that work in 1977, only 16 countries had totally abolished the death penalty. Today, that number has risen to 104 – more than half the world’s countries.

We know that, together, we can end the death penalty everywhere. We are calling for:

Read our latest annual review of the death penalty worldwide

The Death Penalty is always wrong

Sentencing someone to death denies them the right to life – enshrined in the Universal Declaration of Human Rights.

Execution is the ultimate, irrevocable punishment: the risk of executing an innocent person can never be eliminated. Since 1973, 150 US prisoners sent to death row have later been exonerated. Others have been executed despite serious doubts about their guilt.

Some of the countries executing the most people have deeply unfair legal systems. The ‘top’ three executing countries – China, Iran and Iraq – have issued death sentences after unfair trials. Many death sentences are issued after ‘confessions’ that have been obtained through torture.

You are more likely to be sentenced to death if you are poor or belong to a racial, ethnic or religious minority because of discrimination in the justice system. Also, poor and marginalized groups have less access to the legal resources needed to defend themselves.

THE DEATH PENALTY - YOUR QUESTIONS ANSWERED 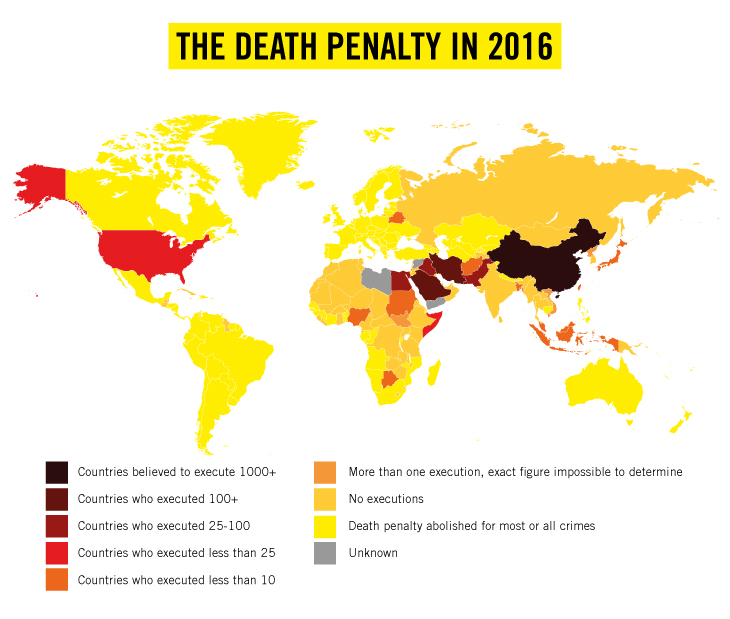