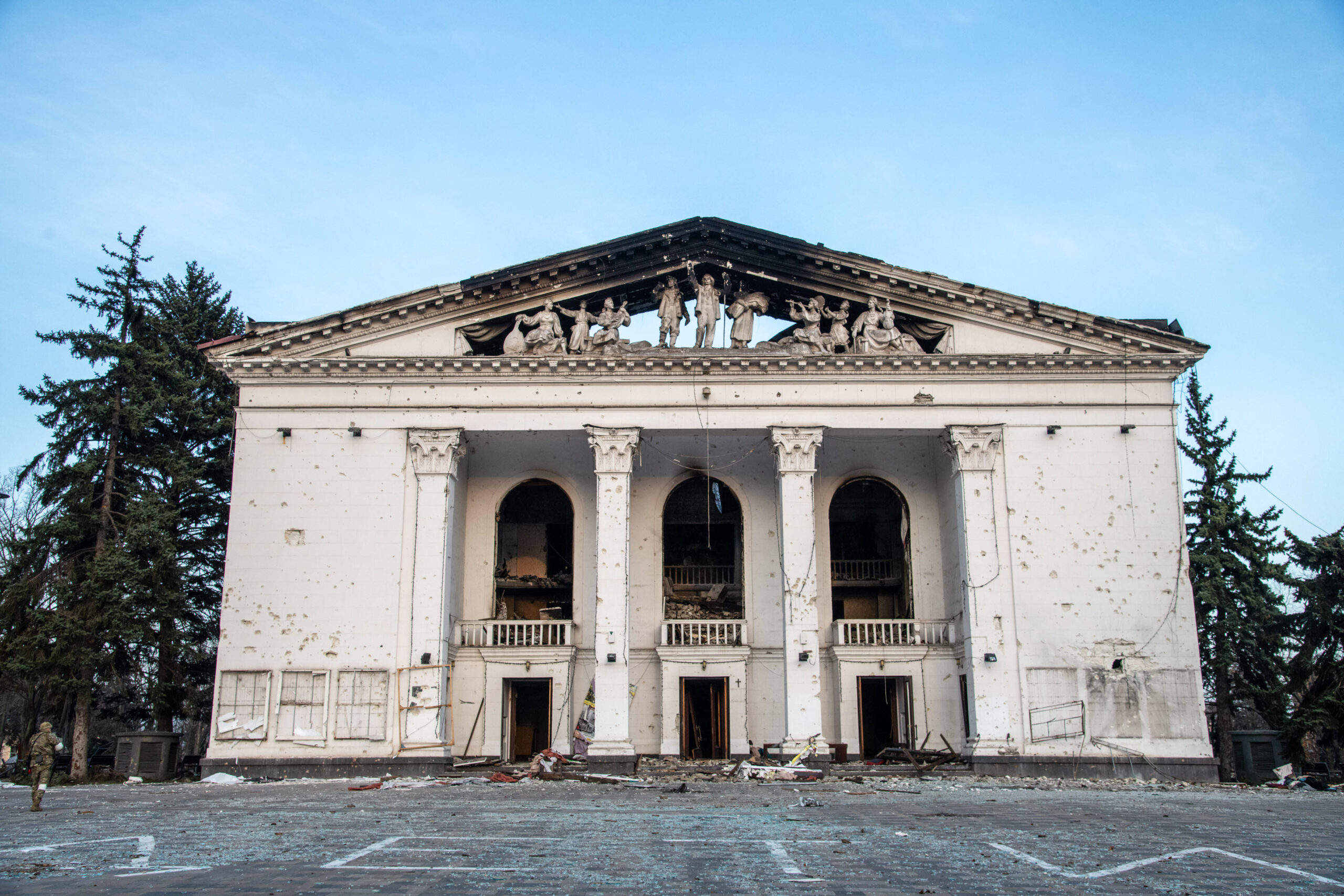 An extensive investigation by Amnesty International has concluded that Russian military forces committed a war crime when they struck the Mariupol drama theatre in Ukraine in March, killing at least dozen people and likely many more.

In a new report, ‘Children’: The Attack on the Donetsk Regional Academic Drama Theatre in Mariupol, Ukraine, the organization documents how the Russian military likely deliberately targeted the theatre despite knowing hundreds of civilians were sheltering there on 16 March, making the attack a clear war crime.

Amnesty International’s Crisis Response team interviewed numerous survivors and collected extensive digital evidence, concluding that the attack was almost certainly carried out by Russian fighter aircraft, which dropped two 500kg bombs that struck close to each other and detonated simultaneously.

“After months of rigorous investigation, analysis of satellite imagery and interviews with dozens of witnesses, we concluded that the strike was a clear war crime committed by Russian forces,” said Agnès Callamard, Amnesty International’s Secretary General.

“Many people were injured and killed in this merciless attack. Their deaths were likely caused by Russian forces deliberately targeting Ukrainian civilians.

“The International Criminal Court, and all others with jurisdiction over crimes committed during this conflict, must investigate this attack as a war crime. All those responsible must be held accountable for causing such death and destruction.”

Amnesty International commissioned a physicist to build a mathematical model of the detonation, to determine the net explosive weight (NEW) of the blast which would be required to cause the level of destruction seen at the theatre. The conclusion was that the bombs had a NEW of 400-800kg. Based on available evidence regarding the aerial bombs in Russia’s arsenal, Amnesty International believes the weapons were most likely two 500kg bombs of the same model, which would yield a total NEW of 440-600kg.

The most likely Russian aircraft to have conducted the strike are multi-role fighters – such as the Su-25, Su-30, or Su-34 – which were based at nearby Russian airfields, and frequently seen operating over southern Ukraine.

Amnesty International examined several alternative theories about who was responsible for the attack, and what weapons may have been used. Based on the available credible evidence, the investigation ultimately found that a deliberate air strike targeted at a civilian object was the most plausible explanation.

‘I couldn’t believe my eyes’

Following the Russian invasion of Ukraine in late February 2022, civilians began fleeing their homes as cities and towns were targeted by military attacks. In besieged Mariupol in the Donetsk region, the theatre became a safe haven for civilians seeking shelter from fighting.

The theatre, in the city’s Tsentralnyi district, was a hub for the distribution of medicine, food and water, and a designated gathering point for people hoping to be evacuated via humanitarian corridors. The building was clearly recognizable as a civilian object, perhaps more so than any other location in the city.

Locals had also written the giant Cyrillic letters “Дети” – Russian for “children” – on forecourts on either side of the building, which would have been clearly visible to Russian pilots and also on satellite imagery.

Nevertheless, Russian bombs struck the theatre shortly after 10am on 16 March, producing a large explosion which caused the roof and huge portions of two main walls to collapse. At the time of the attack, hundreds of civilians were in and around the theatre.

Amnesty International believes that at least a dozen people were killed by the strike and likely many more, and that many others were seriously injured. This estimate is lower than previous counts, reflecting the fact that large numbers of people had left the theatre during the two days prior to the attack, and most of those who remained were in the theatre’s basement and other areas that were protected from the full brunt of the blast.

When the bombs detonated, they destroyed the adjacent interior walls along the sides of the performance space, and then breached the exterior load-bearing walls, creating two main debris fields on the north-eastern and south-western sides of the building. Both debris fields are visible on satellite imagery taken just minutes after the strike.

Igor Moroz, a 50-year-old architect, was nearby when the theatre was hit. He told Amnesty International: “It all happened in front of our eyes. We were 200 or 300 metres away [when] the explosion happened… I could hear a plane and the sound of bombs dropping. Then we saw the roof [of the theatre] rise up.”

Gregory Golovniov, a 51-year-old entrepreneur, said: “I was walking down the street leading to the drama theatre… I could hear the noise of a plane… but at that time I didn’t really pay attention because [planes] were constantly flying around… I saw the roof of the building explode… It jumped 20 metres and then collapsed… then I saw a lot of smoke and rubble… I couldn’t believe my eyes because the theatre was a sanctuary. There were two big ‘children’ signs.”

Vitaliy Kontarov, a 48-year-old truck driver, was also close to the theatre at the time of the attack. He told Amnesty International: “We heard planes… I saw two missiles fire from one plane towards the theatre.”

‘In a second, everything changed’

In total, interviewees provided Amnesty International with the full names of four people who were killed: Mykhailo Hrebenstskii, Luba Sviridova, Yelena Kuznetsova, and Igor Chystiakov. They also gave the forenames of three other people they believe were killed. Several survivors and other witnesses reported seeing dead bodies of people they could not identify, and it is likely that many fatalities remain unreported.

A woman in her late teens was sheltering in the basement with her boyfriend and her mother when the bombs struck. She told Amnesty International: “In a second, everything changed. Everything jumped up… People started screaming. It was full of dust. … I saw people bleeding. We grabbed our documents and left… Some people were not as lucky.”

Yehven Hrebenstskii found the body of his father Mykhailo inside the concert hall. Yehven told Amnesty International: “There were many injured people… There were police trying to pull people out of the rubble… At first, I saw his [Mykhailo’s] arm. First, I saw a familiar hand. You know the hand of your loved ones. His face was covered with blood. His body was covered with bricks… I didn’t want my mom to see.”

Dmytro Symonenko was with Luba Sviridova moments before she died from her injuries. He told Amnesty International: “She was severely injured. She managed to crawl from the rubble… she asked us to remember her name, because she felt she was dying.”

Many other interviewees told Amnesty International they had seen bloodied bodies and dismembered body parts, including legs and hands, in the rubble of the devastated building following the strike.

None of the 28 survivors Amnesty International interviewed, nor any of the other witnesses around the theatre on the day of the attack, provided any information to indicate that the Ukrainian military was using the theatre as a base for operations, a place to store weapons, or a place from which to launch attacks.

The civilian character of the theatre and the presence of numerous civilians was evident in the weeks prior to the attack. The nature of the attack – the strike’s location inside the building, as well as the likely weapon used – and the absence of any potentially legitimate military objective nearby, strongly suggests that the theatre was the intended target. As a result, the attack likely constitutes a deliberate attack on a civilian object, and is a war crime.

“Through the air and on the ground, Russian forces have been on a well-documented and deliberate killing spree of civilians in Ukraine,” said Agnès Callamard.

“Thorough investigations are urgently needed in order to hold perpetrators accountable for the serious injury and loss of civilian life they caused, as well as for the extensive damage to civilian infrastructure.”

Between 16 March and 21 June, Amnesty International gathered and analysed available credible evidence related to the attack on the theatre. This included 52 first-hand testimonies from survivors and witnesses of the attack and its aftermath, 28 of whom were inside or adjacent to the theatre at the time. Amnesty International also analysed satellite imagery and radar data from immediately before and shortly after the attack; authenticated photographic and video material provided by survivors and witnesses; and two sets of architectural plans of the theatre.

This was supported by an open-source investigation by Amnesty International’s Crisis Evidence Lab, who examined and verified 46 photos and videos of the strike that were shared on social media, as well as an additional 143 photos and videos that were privately shared with researchers.

Amnesty International’s ongoing documentation of violations of human rights and international humanitarian law committed during the war in Ukraine is available here.

Support our work in Ukraine with a donation.