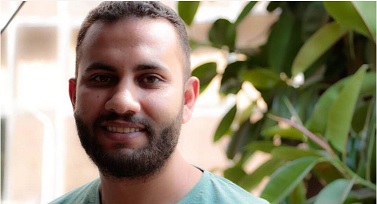 Demand to know where Ibrahim is

Disappeared from the Streets of Cairo.

Ibrahim Ezz El-Din was arrested on 11 June 2019 near his home in Cairo.

For months, the police said they didn’t have him, and his family had no information about where he is or what has happened to him. It gets worse: he’s the fifth person linked to his organization, which documents and campaigns against human rights violations in Egypt, to have been arrested. Across Egypt, hundreds of people are being disappeared by the state simply because they or their families oppose or criticise the government.

Update: After being arrested at night by plain clothed police and forcibly disappeared for 167 days, Ibrahim Ezz El-Din, a 26 year old researcher, has finally ‘appeared’ after being brought in front of the Supreme State Security Prosecution in Cairo on 26 November. He seemed weak, had lost weight and told the Prosecutor that he had been tortured while in detention.

Ibrahim was aquestioned about his human rights work and no evidence was presented against him. Neither Ibrahim nor his lawyers were allowed to examine the NSA investigation casefile against him.

Ibrahim Ezz El-Din, who appeared weak and having lost much weight, told the prosecutor that he was tortured during his detention to extract information about his relationship to the Egyptian Commission for Rights and Freedoms (ECRF), and about ECRF’s work, as well as kept in inhumane and degrading conditions of detention, at several security agencies locations. The prosecutor ordered his detention for 15 days pending investigations. The location of his current detention remains unknown to us.

Your pressure has already made a huge impact, keep your voice up and help us release Ibrahim

Take Action: Call on the Egyptian authorities to release him.